Blame player or coach? A look at Bradley Beal's possessions vs. Kings

Why did Bradley Beal shoot so much against the Kings? Did he exhibit poor shot selection, or was he not put in the right position to succeed by his coaching staff? We break down the film.

Share All sharing options for: Blame player or coach? A look at Bradley Beal's possessions vs. Kings

There continues to be a ton of discussion about Bradley Beal's poor game against the Kings. Did he make bad decisions? Was he put in difficult positions by Randy Wittman? Is he just not as good as we think he is? Did he shoot the Wizards out of the game with bad shots, or did he just have a cold shooting night on good looks?

Let's try to figure this out. Beal took 23 shots, had three possessions where he drew a foul, generated six assists and had one memorable turnover. For the sake of this discussion, let's remove the turnover and focus only on his other 32 ended possessions. What happened on each of them?

Here are my observations. I've linked the NBA.com videos for you all to peruse as well.

SHOT 1: First play of the game. Pretty standard Flex-style motion. Beal screened twice -- once for Marcin Gortat to pop out, once for Trevor Booker to back cut -- then takes a dribble handoff from Gortat. He's definitely open. 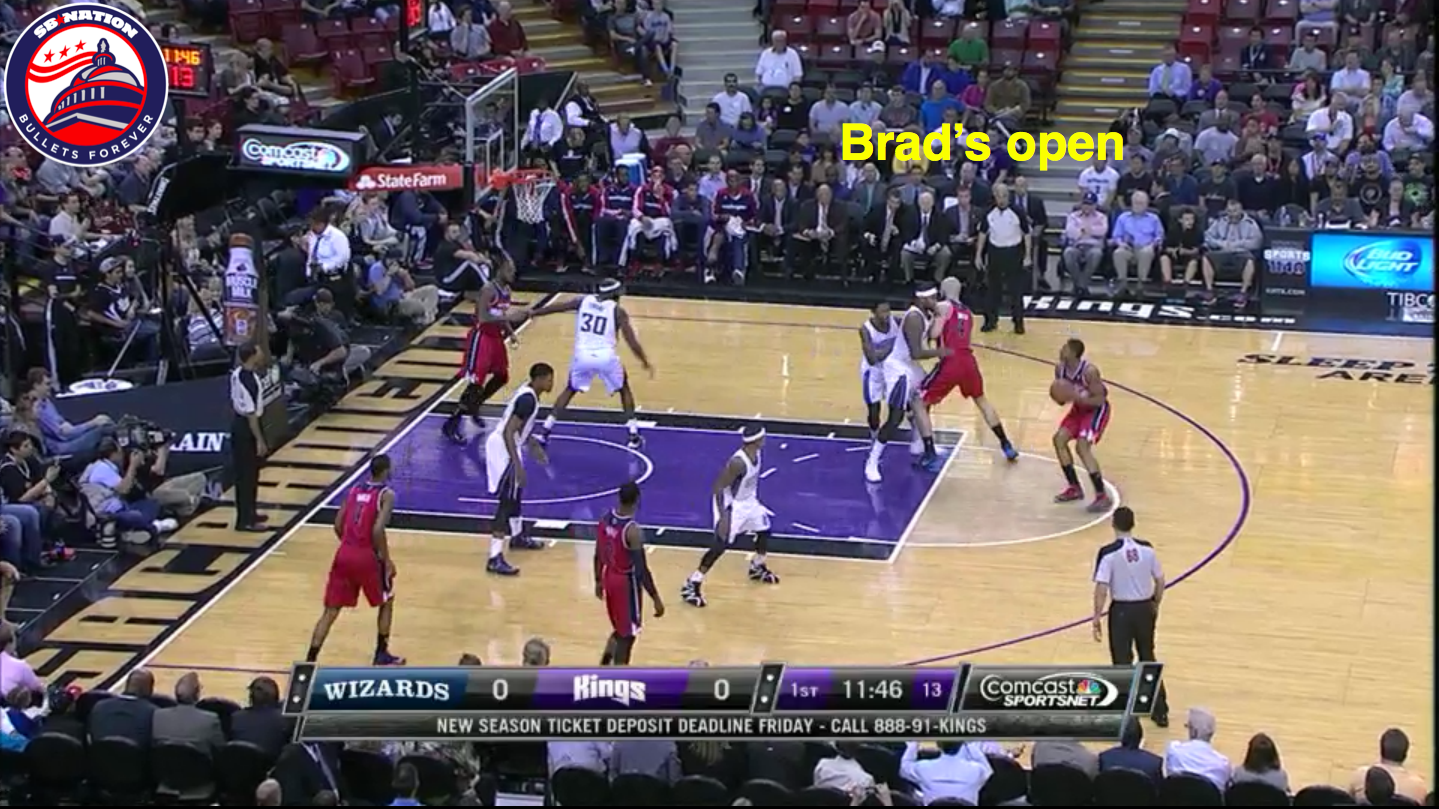 But why is the DHO (acronym for dribble handoff that we'll keep using) happening so close to the rim instead of near the three-point line? Better spacing that way, plus open 3>open 2. This is the kind of thing I constantly wonder about Randy Wittman's offense.

ASSIST 1: The Wizards run their Hawk curl play, Beal makes a nice read to accept the trap as he comes off a double screen to find Trevor Booker and Grown-Ass Man makes a nice move for two.

SHOT 2: Beal grabs a rebound and goes up the right side. Gortat comes over for a screen and Ben McLemore easily lets Beal get middle. Nobody steps up and Beal has a wide open 18 footer. Can't complain about this one.

SHOT 3: John Wall rushes it up after a make, draws two guys and throws a flying pass to Beal in the right corner. Perfect. Just missed.

SHOT 4 (make): Beal sets up McLemore beautifully off the ball, takes a DHO from Gortat and shoots a clean 17-footer when DeMarcus Cousins doesn't step up. Hard to complain too much. Still, I don't like that this screen happens so close to the basket. Imagine if it happened further out and Beal was stepping into a three instead of a long 2.

SHOT 5: The Wizards swing the ball from one side to the other, and Beal enters the ball to Gortat in the post. Beal again sets up McLemore beautifully on a cut, rubs off Gortat and takes a handoff from the baseline. He misses a wide-open layup. Beautiful action, beautiful work by Brad to get open, but he has to finish.

DRAWN FOUL 1: Beal comes middle off an Al Harrington screen. Nobody steps up, so he attacks the basket and draws a foul on Quincy Acy.

SHOT 6: After receiving a kickout pass from an out-of-control Harrington, Beal sidesteps McLemore going right, pauses, then accelerates to the rim. A fantastic hesitation move, the kind that all this sampling is supposed to help him learn. But ... another missed layup.

SHOT 7: The Wizards run that annoying misdirection handoff play going to the left baseline. The goal is to get the rolling big man a layup with a well-timed pocket pass, but when that play isn't there, Beal has a tendency to do this. 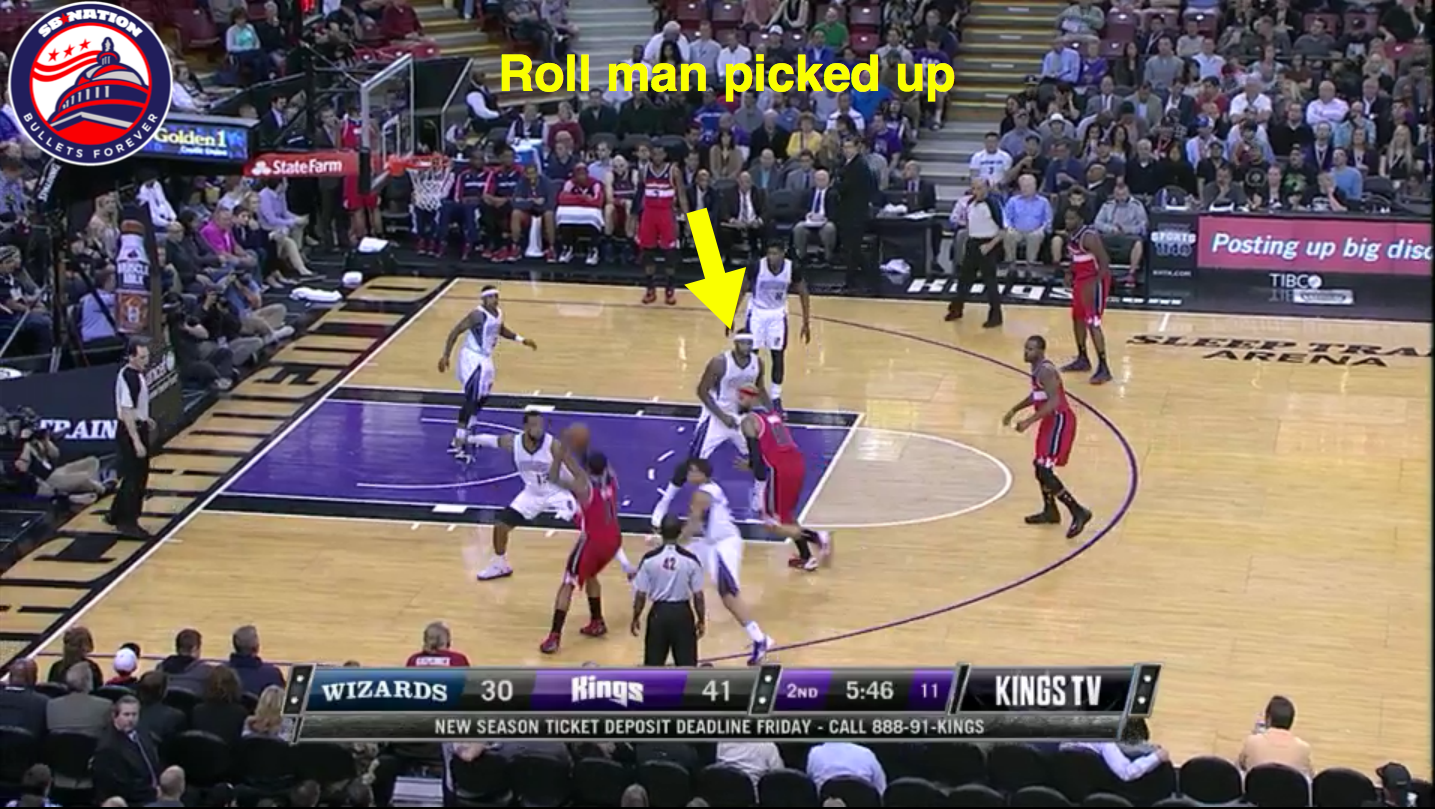 The right play is probably to have Beal keep his dribble alive for Gooden to roll, then hit Booker and have him rotate it the other way, but that's a read Beal's struggled to make all year.

ASSIST 2: Beal comes off a down screen from Gortat, makes a great read when the Kings try to box him in and drops off a beautiful pocket pass to Gortat for a layup. This is the kind of sequence that makes you wonder why Beal doesn't come off screens more often.

ASSIST 3: This should be Booker's assist, but Beal makes a nice read to accept the baseline trap on a pick and roll, pitch it back to Booker and let him move the ball. In this case, Booker whips a great pass to Wall for an open three. Nevertheless, this is the kind of selfless read Beal must make more often. He created the play just by accepting the defense's attention and moving the ball.

SHOT 8 (make): This is the kind of play the Wizards need to run more. Beal looks to his right as if he's screening for Martell Webster, then quickly turns and curls to his left and runs off a staggered double screen involving Booker and Gortat. McLemore trails him, so Beal gives him a head fake and steps in for the rhythm jumper.

SHOT 9: Missed semi-contested three. I'll live with this one even if Beal could have shot faked and perhaps drawn another defender to him.

SHOT 11 (make): Wall to Beal for the cornerish 3 in transition.

SHOT 12: Beal came right towards the baseline off a Gortat screen and was well-covered by McLemore. He crossed over right, but Jason Thompson stepped out to contest a difficult shot. 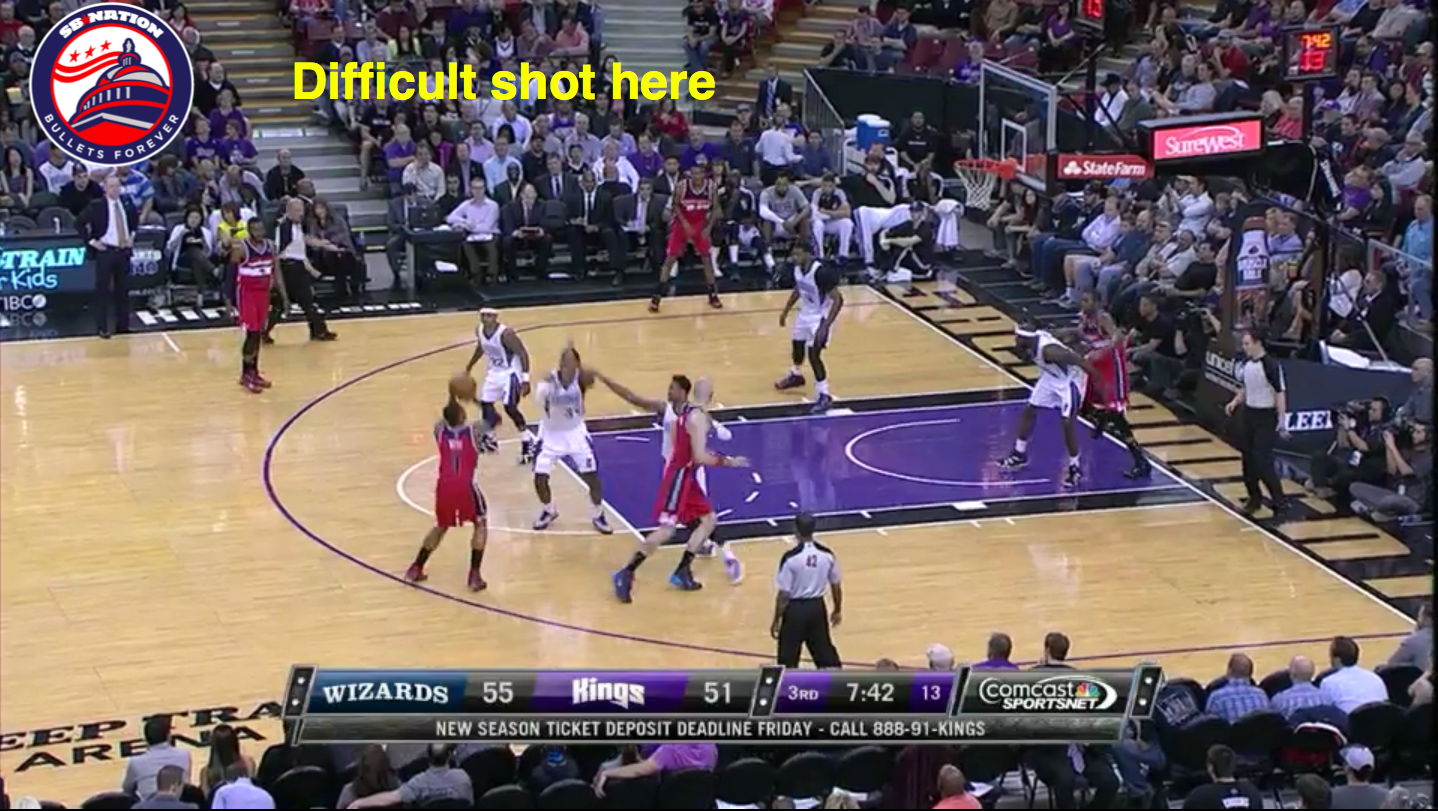 With 13 still left on the shot clock, Beal should have reset the play.

SHOT 13: See Shot No. 2, except this time, the Kings force Beal right and contest his pull-up well. Not a good attempt.

ASSIST 4: The Kings successfully push a Beal/Gooden side pick and roll to the right baseline, but Beal accepts the coverage and throws a nice behind the back pass to Gooden for a mid-range jumper. A simple play, but effective. (Gooden could have moved the ball instead of firing a 20-footer, but that's on him, not Beal).

SHOT 14 (make): Beal posted up the smaller Ray McCallum, got middle and finished over Acy.

ASSIST 5: Beal and Gooden ad-lib a pick and pop. The Kings again push it baseline, and Beal hits Gooden with a one-handed bounce pass at the three-point line. Gooden sees Cousins recovering poorly, throws in a shot fake and gets to the hoop. Again: nice, simple read from Beal.

SHOT 16: The ball is swung to Beal on the right side, and Al Harrington comes over to set a screen. Beal sluggishly uses it and can't shake anyone, so he's forced to pull it back and ISO against McLemore. Beal is not very good at doing this, so the result is an ugly three. He has to use Harrington's screen more decisively.

SHOT 18: Ibid, except this time, Beal has a toe on the line and misses. Ugh this play.

SHOT 19: The game-winning attempt that went to Beal instead of Wall. Gortat came out to set a very good screen and Beal had a very good look for three when Cousins didn't step out (seriously DMC it's only the entire game that's on the line), but he missed.

SHOT 20: Looked like an ISO that missed over Cousins. Video cut off.

DRAWN FOUL 3: After the Kings defend a curl well, Beal ad-libs a DHO with Gortat and sees Cousins trying to step up. A deadly hesitation dribble -- one that, again, all this sampling has helped develop -- gets Beal by DMC and to the rim, where Isaiah Thomas fouls him.

ASSIST 6: This is the optimal result of the handoff play we always complain about. The goal is to get the defense to pressure Beal and honor his shooting reputation, opening up the pocket pass to a rolling Gortat. Sure enough ... 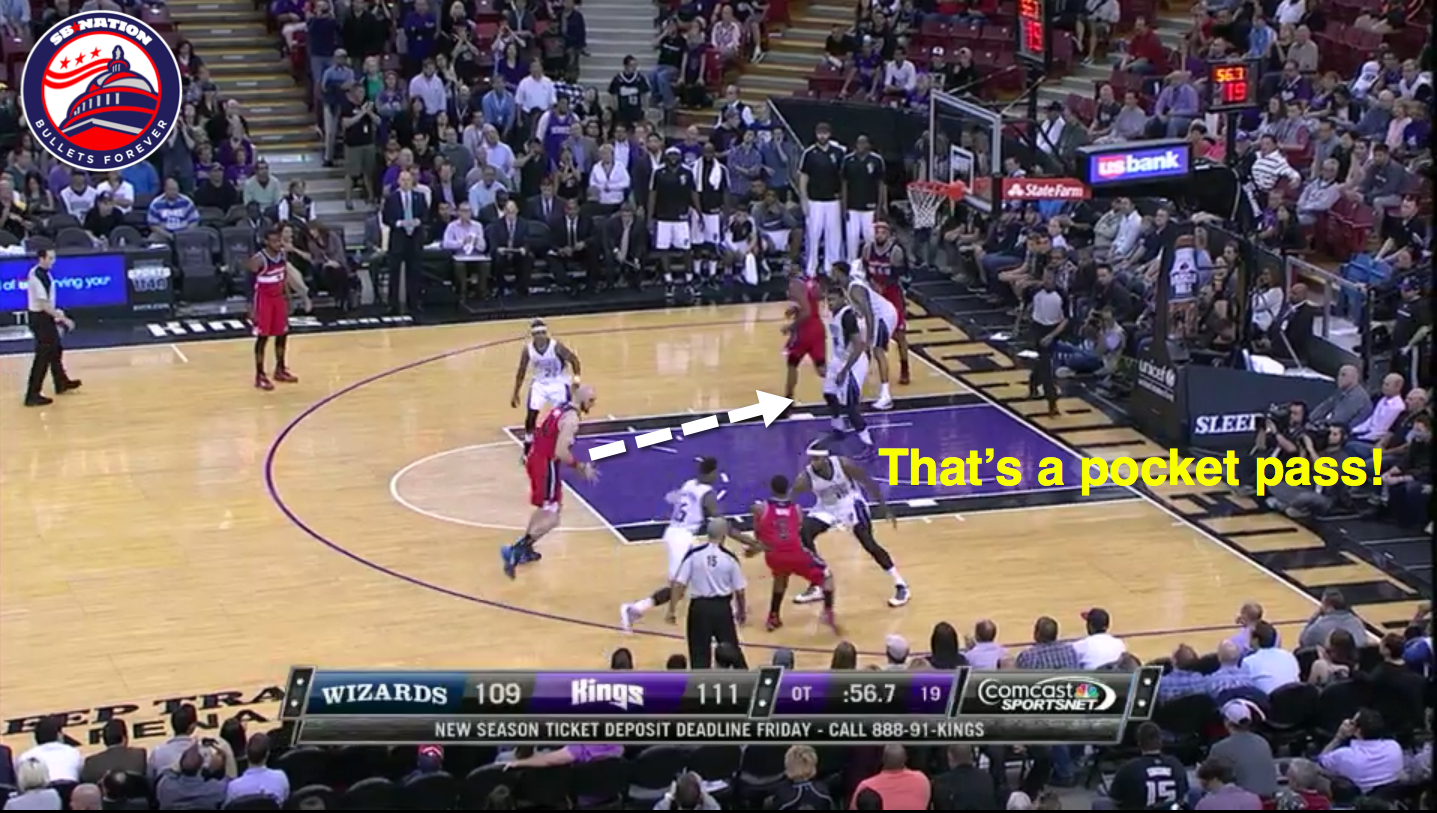 This is horribly defended by the Kings. Cousins is way too far out on Beal, Thomas isn't close to plugging the passing lane and nobody is pre-rotating to stop Gortat at the rim. But this is the ideal (and perhaps only efficient) outcome of this play.

SHOT 22: The dreaded handoff play again? I know it worked, but Wittman's going to the well one too many times, especially considering Mike Malone probably chewed out his team for defending it incorrectly the previous play. The Wizards actually got a good look out of this and they were dead set on going for the win, but I would rather the ball be in Wall's hands. 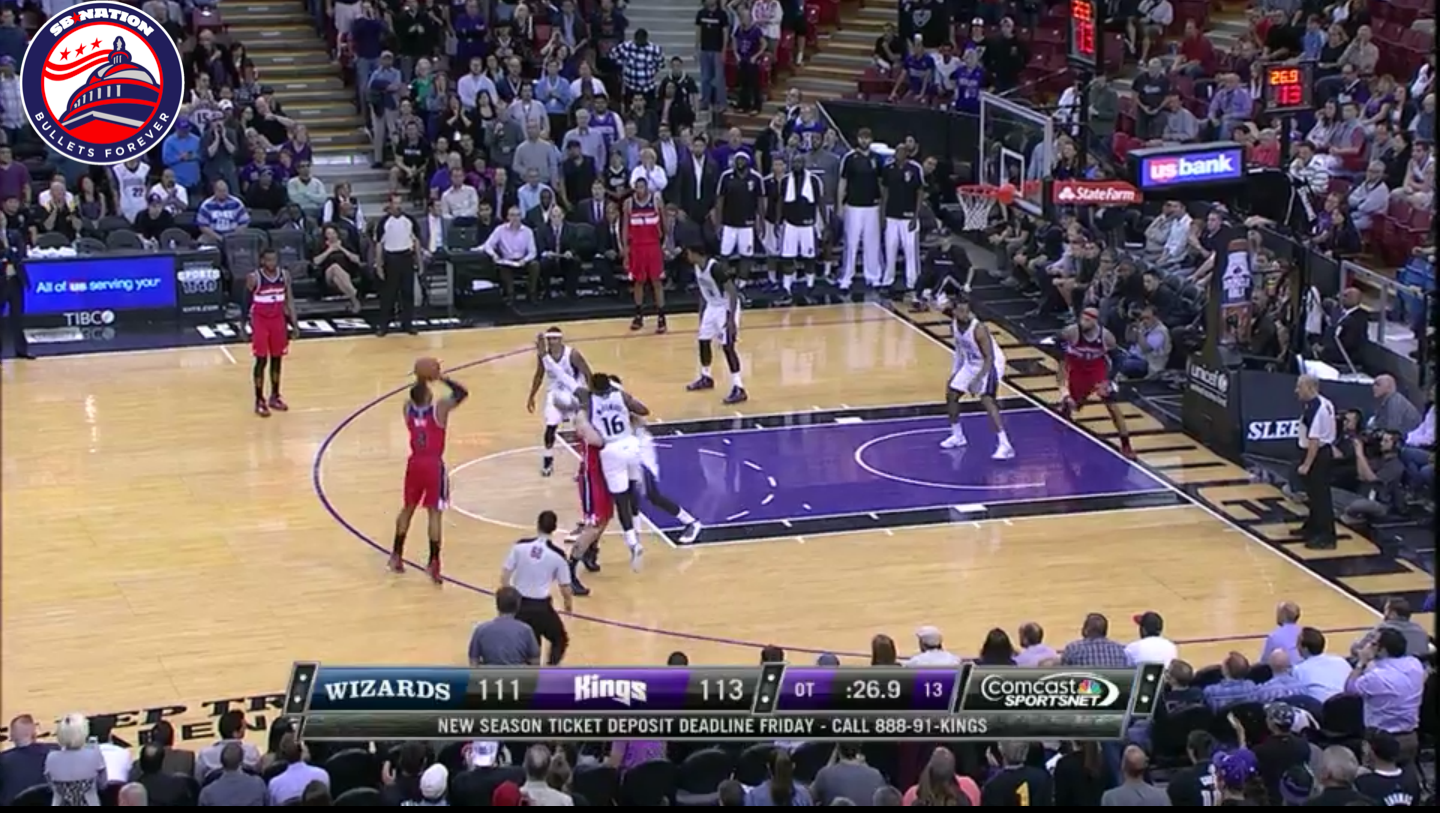 SHOT 23: A desperation three with the Wizards down four late.

Ultimately, this is both on the coach and player. The Wizards definitely experienced more success when Beal curled off screens than when he ran pick and roll, yet the distribution favors the latter. The pick and roll plays often called put Beal in tough positions, either because he's going to the sideline or is too close to the basket.

But there were also some poor attempts by Beal, as well as plenty of decent looks that missed. And while Beal did have a nice floor game (six assists to one turnover that I don't think was really his fault), he still didn't always make the correct reads.