What is it with the Wizards and 10-day contracts? It seems every time Washington signs an NBA journeyman or D-Leaguer to a 10-day deal, fans roll their eyes, and end up eating crow within the week.

Well, you can add Drew Gooden (Greaten?) to the list of supposed scrubs that have left Wizards fans pleasantly surprised, and pining for more. John Wall may have led the Wizards with 33 points (10-of-15 shooting, 4-of-6 from three) and capped last night's 101-94 comeback win with an emphatic runaway slam with 28.9 seconds remaining in the game, but this was the Drew Gooden Show (make sure to check out Satchel's excellent feature on Gooden from this morning).

Gooden scored 11 of his 21 points in the fourth quarter. In 26 minutes off the bench, he shot 8-for-11, grabbed nine rebounds and (small sample size alert) recorded a team-high plus-17. Most of his buckets were long jumpers, and the crowd erupted louder with each one he drained.

How amazing was Gooden? He had Aaron freaking Rodgers tweeting about it after the game (see below).

The Real Uncle Drew's heroics ended overshadowing the fact Bradley Beal played the day after suffering an ankle sprain that initially looked like it could have been season-ending. Not only did Beal play, but he played well, finishing with 15 points and five assists, and combining with Wall to keep the Wizards within striking distance after the first half.

In the end, this was one the team's better wins of the season, and probably its most important. The Wizards and Nets entered the game virtually tied in the standings, but Brooklyn was seeded fifth by virtue of its winning percentage being one one-thousandth higher than Washington's. So not only did the win give the Wizards the fifth seed and knock the Nets into sixth place, but it also gave Washington the tiebreaker over Brooklyn, meaning the Wizards are effectively two games ahead of the Nets now (as Mike explained this morning).

The Nets are now 31-2 on the season when leading after three quarters. Both of those losses? Against the Wizards (see tweet below). Pretty cool. The Wiz now face a four-game West Coast road trip, beginning Tuesday night with a should-win against the Kings. They then face the Trail Blazers, Lakers and Nuggets. Need to go 3-1 at least in order to keep pace in the East.

Oh, and the team's magic number for a playoff berth? Seven more wins, with 16 games to play. Let's gooooooooo.

4 - Washington's rebounding advantage (39-35) against Brooklyn. The Nets are a bad rebounding team, so the Wizards should have had the advantage anyway, but they entered the fourth quarter being outrebounded by the Nets, 28-25. But the doubled up Brooklyn on the boards in the fourth, 14-7, en route to the win.

We’re witnessing a Drew Gooden-Marcus Thornton duel and I haven’t even been drinking.

Al Harrington and Drew Gooden leading the Wizards back in a mid-March game. Just like we all expected!

We’re witnessing a Drew Gooden-Marcus Thornton duel and I haven’t even been drinking.

Drew "Long-2" Gooden, Master of the Midrange and Protector of the Realm.

Playoff feel in D.C. between Nets and Wiz.

Drew Gooden. BECAUSE WHY NOT

Drew Gooden must be hacking. There's no other explanation.

Drew Gooden shrug game. It's over.

That's the loudest I've ever heard Verizon Center for something the Wizards just did. Legit got goosebumps. This is the playoffs right here.

Deafening crowd in D.C. right now. For the Wizards. This is real life. We've arrived.

101-94, Wizards. Wall with 33. DREW GOODEN with 21. That extra game in the standings is absolutely HUGE. Biggest win of the season.

One more thing: if you haven't been to a Wizards game recently, it's time to go back. Support this team. Arena was bumping at the end.

#Nets are now 31-2 when leading after three quarters this season. Their only two losses have come to ... the #Wizards.

Martell Webster on John Wall: "He knows all of the opposing plays in advance, he’s calling them out. He’s a general out there. That's big."

Paul Pierce on the Wizards: "They're coming into their own. They're growing up, right before our eyes."

Drew Gooden is scoring 1.1 PPA in his comeback tour with the #Wizards. Fire-starter.

we gon ride round Brooklyn tomorrows screamin THIS WE HOUSE.

Liked how Wiz spread the floor and ran what were almost high ISOs for Wall. D-Will couldn't stay in front.

Gooden: "You guys joke about me being old but I'm still Drew Gooden. That's what I do. When I see a couple go in, I feel like I can't miss."

Wizards fans may have laughed at first, but now how do you feel about @DrewGooden? #ballin #midrange #21tonight

Kidd: "They have a very good point guard. It starts with him. He puts a lot of pressure on you." #WizardsTalk #NBA #WizNets

I think @usabasketball should consider adding John Wall to the team. Just a thought, of course.

Pierce: "Wall has matured ... That is what the Washington Wizards have been waiting on and you are seeing it." #WizardsTalk #WizNets #NBA

One of the most impressive and gratifying wins of the season for @WashWizards. Veterans have given this team huge dose of savy & B-ball IQ.

Big Time Win and The Fans Was Amazin...#wizkids !!

DWill: "They got a lot of weapons & they are still missing Nene. Once they get him back, they will be even better" #WizardsTalk #WizNets

Oh man, so many great ones, like these end-game GIFs courtesy of Inside Job...

There's the video of Wall's 33-point night, courtesy of the immaculate Dawk Ins...

Then there was the star of the night...

And finally, the crowd at Verizon. I've only been to a handful of games this season, but this was by far the loudest I'd heard the place. As in, legit goosebumps, guys. It's time to remind everyone D.C. is, first and foremost, a basketball town. (H/T @HoopDistrictDC)

Alright, the Recap comments got way more rec's than in the Gamethread, so we'll go with those again. This comment was the top vote-getter... 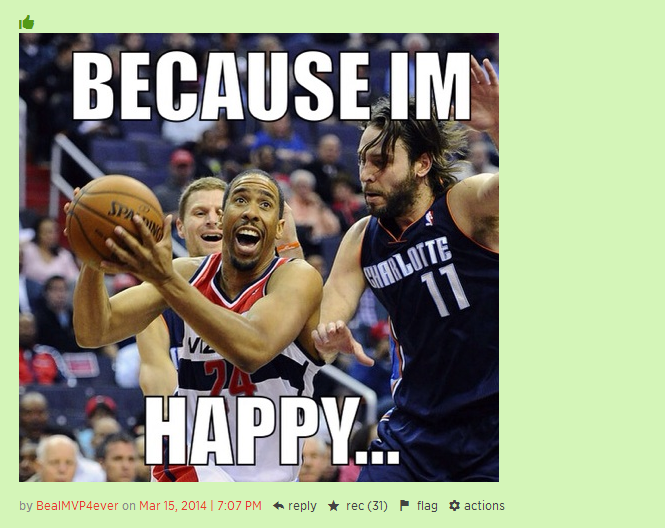 But this being a Gooden-themed edition of Pixels, this was my personal favorite. 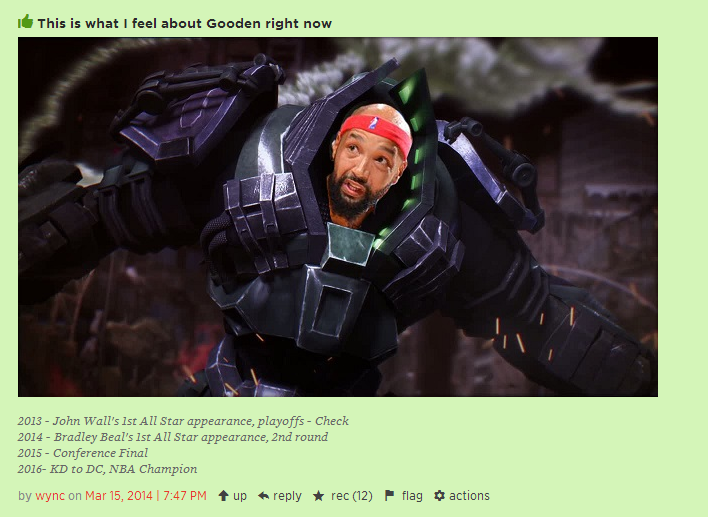