The early diagnosis on Bradley Beal's late fall against Orlando is a sprained ankle, but more tests are expected to follow.

The Wizards are saying that Bradley Beal sprained his right ankle on a scary tumble late in the team's 105-101 win over the Orlando Magic on Friday.

And there is more good news: he apparently walked out on his own power to the team bus.

Bradley Beal taped up his ankle & walked out of locker room on his own power. Said he'll see how he feels on Sat. when #wizards host BKN

However, this is an initial diagnosis, and more tests are expected to follow. Typically, players will receive an X-Ray at the arena and an MRI the next day, so we won't likely know the full extent of the injury until then. Time to hold our breaths.

Beal went down with 42.7 seconds left in overtime after falling awkwardly while defending a Victor Oladipo drive. Here's the full sequence, via SBNation.com's Dane Carbaugh. 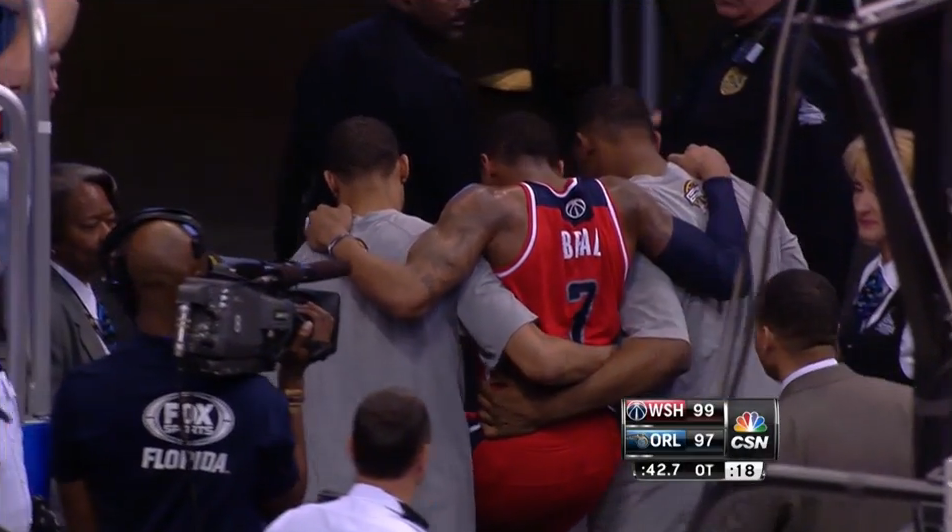 This came one play after Beal saved the game, chasing down Jameer Nelson for a blocked shot that led to the go-ahead three by Trevor Ariza. Oladipo missed the layup on this sequence and John Wall iced it with a jumper on the Wizards' ensuing possession.

This is the second time Beal has been carried off due to an injury at the end of a game this season. He went down in a heap at the end of a blowout loss to the Timberwolves in December, but that injury proved not to be serious and he played the very next night. Beal also missed three weeks earlier in the season after suffering a stress injury in his right leg and missed three months last summer with a similar injury in a different spot on the same leg.