But seriously, shape up, Wizards.

Sorry about the day-after Pixels everyone, but yesterday was rather busy for the site, so I figured rehashing the 98-85 loss to #BigSlowCats could wait awhile.

Actually, you're probably wishing I had just let it be, because that was a pretty frustrating game, not only because it resulted in a loss, but because of the implications that loss could have on the Wizards' playoff seeding. It wasn't that long ago that I declared the Wiz seemed unlikely to fall below the sixth seed. Two Wizards' losses and two Bobcats' wins later, and welp.

All isn't lost, obviously, but the Wizards need to get their wits about them, and quick. Charlotte is playing good basketball, and is one of the few teams in the NBA whose remaining schedule is easier than Washington's. The Wizards also play the Bobcats twice more this season, which would have sounded awesome a couple months ago, but after Wednesday's game? Yeesh.

The upcoming three-game stretch is key. First up is the Magic tonight (a definite should- and must-win), then the Nets on Saturday, and the Kings on Tuesday (another should- and must-win). Winning all three would be ideal, considering that a likely loss against the Trail Blazers follows, but the Wiz absolutely must go 2-1 to keep pace with the teams close to them in the standings.

2 - Fast break points scored by Washington against Charlotte. They next (and every) time the Wizards only score two fast break points, they will lose again.

11 - Fouls committed by the Bobcats against the Wizards. Well, that's how many the refs call, anyway. #sourgrapes

0 - Points scored by Trevor Booker in more than 24 minutes. Al Harrington and Drew Gooden combined to score 12 points in 33 minutes.

@BulletsForever @adammcginnis the danger of showing people a picture of a cat while asking them to use the Internet...

more like randy wiTtman I don't know what I was going for there.

We only do this when it's absolutely warranted, and boy was it, 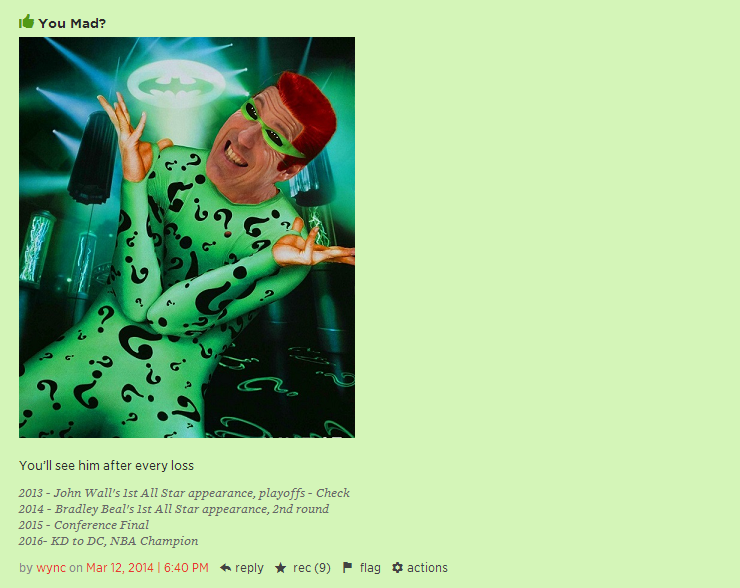