I think it's extremely important for your first dunk to be one of your best, if not the best. I don't believe in saving dunks b/c you don't even know if you'll have a chance to advance to the next rounds yet (not sure if that will apply to this contest). Plus if your first dunk is superb you get the fans/crowd/judges on your side and now they're looking forward to what you have each time.

Ideal - Vince Carter - his first dunk (360 windmill) top 5 dunk best dunks of all time IMO. Got the crowd hyped, put pressure on his competitors, gave him all the confidence in the world.

Bad - Jamario Moon apparently had some wicked dunks saved for the final rounds but unfortunately his first round dunks weren't enough to get him there.

Next big thing is PRACTICE your dunks b/c you MUST be able to make your dunks on the FIRST try in the contest for the best reactions. Usually, much of the element of surprise is lost when you miss your first attempt. I know these guys have been dunking since their teens, but still, you need to practice your dunks.

Also stay away from doing dunks that are hard in theory but don't look that great, even if they've never been done in the NBA contest before.I think you need a balance of both.

Good - Fred Jones a few years back did a simple catch of the bounce 180 dunk where he really stretched to get the ball b/c he over threw the bounce. His dunk was pretty simple in theory, but b/c he overthrew the ball it made his dunk look way better than it really was, esp. b/c he was only 6'3.

Lastly, dunk with EMOTION, which from watching Wall since his HS days, comes natural to Wall. But sometimes guys hold emotion in, in the Dunk Contest for some reason. Hope Wall's not like that.

Okay, so I think those are the basics to base your contest strategy on. All that's left is coming up with dunks that you can do that are creative, show off your athleticism, look good, and give us the fans a great showing.

Post pictures/gifs of dunk you think Wall can and should do in the contest. Here are my suggestions (do something like these):

Left Handed MJ FT line...well I've read he can do it from the FT line, but essentially from as far out as you can. 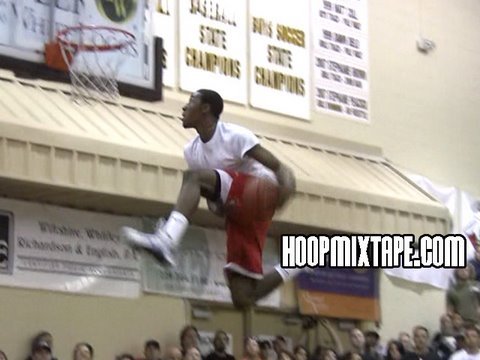 Some variation of these.

If this is possible for him, it would be epic.