Was switching on defense really the problem vs. the San Antonio Spurs

Randy Wittman suggested that one reason the Wizards lost a double-digit lead to the Spurs Wednesday was excessive switching on defense. But did the Wizards actually switch too much in the second half? If so, were the switches damaging?

Share All sharing options for: Was switching on defense really the problem vs. the San Antonio Spurs

The Wizards do some curious things throughout the course of games. Sometimes they jump out to big leads by halftime, only to come out sluggish and see their lead taper before their own eyes. Other times, they break the offense by resorting to post-ups, which kills the flow of the game. According to MySynergySports.com, they rank just 25th in scoring on such plays and are turning it over 14 percent of the time.

Both of these things happened in Wednesday night's loss to the San Antonio Spurs, but did they cost the Wizards the game?

How far can the Wizards go?

Paul Flannery talks to Michael Lee of the Washington Post about the state of the franchise.

How far can the Wizards go? Spurs-Wiz: A GIF breakdown

Not according to Randy Wittman. He had a different explanation for his team's second half woes.

Wittman isn't completely wrong here. Over the past month or so, the Wizards have really cut down on switching, opting to drop their bigs into the lane off pick and rolls in order to corral ball handlers rather than engaging them at the point of attack. Wings are locking and trailing ball-handlers off screens rather than switching and sticking to one side of the floor, and they're beginning to see it pay off. John Wall and Trevor Ariza in particular are beating their man to the spot, jumping passing lanes and funneling them into the teeth of the defense. They're becoming over-aggressive without all the unnecessary and lazy switching of assignments that took place earlier in the year.

But it's hard dropping bad habits, and it's extremely easy to resort to these "shortcuts" when you have a short rotation for much of the season. This is especially true in exhausting games such as Wednesday's double-OT loss. The Wizards had several plays in which they switched last night, and it's certainly not unheard of despite Wittman's claims.

I went back and took a look at all the switching done against the Spurs to determine just how much it contributed to their letdown in the second half.

This is a slow-developing play, and it's hard to really fault Bradley Beal for staying back while Marcin Gortat picks up Nando De Colo off a double-screen. It's hard fighting over two screens set by two very large men as it is, but had Beal continued to chasing De Colo around, Nene would have been responsible for both Duncan and Diaw. One is eventually going to pop out to the three-point line to free up a lane for the other to dive to the rim, and Beal was cognizant enough to stay put.

Switching almost always leaves you at a disadvantage on the offensive glass, and Diaw exploits just that by corralling the rebound. But because the play took so long to develop, he could not get off a clean shot at the basket.

Here, the Spurs are going to run a series of cross-screens in the paint to confuse the defense and hopefully get Tim Duncan in a favorable matchup on the low block. Duncan will roll into the paint unimpeded, thanks to a down-screen set by Marco Belinelli.

After the down screen is set, Duncan is going to take a cross-screen from Matt Bonner, which should get him the post-up opportunity he wants. Knowing this, Webster leaves his man and bumps Duncan which buys Gortat that extra split-second needed to recover.

The problem here is his original man, Danny Green, is going to pop up above the break for an easy look. Luckily, Ariza bails Martell out with a strong closeout, which forces Green to put the ball on the floor and reset.

Green swings it back to Patty Mills who finds Duncan down low for the score. In this case, had the switch not been made, Green would've nailed his second three of the half.

In the past, Wizards bigs would hedge hard, hoping for the ball handler to pick up his dribble. Instead, the Wizards are starting to have those big men drop back further, even if it means conceding mid-range shots. This goes back to what they did so well last year.

But this also leaves bigs susceptible to switches if the ball handler chooses to reset. Because Bonner was the screener, Wall absolutely had to stay attached to him to prevent an open three-point. Duncan comes up and sets a second pick, and again the bigs stay put. Cory Joseph takes the bait, and nails the midrange jumper.

There's not much else you can do, and if you're giving up anything, it might as well be just that.

Again, this is another slow-developing play, so it's not a terrible decision to switch when the primary action involvesDe Colo and Bonner, especially when it's this late in the shot clock. Trevor Booker was well on his way to shutting off the baseline completely before Gortat slid over, and that left Tiago Splitter wide open to catch and finish.

VERDICT: Not a terrible switch, though not perfectly executed.

This is somewhat off a broken play. Splitter chases down the offensive rebound, and because the Wizards' floor balance is out of whac, De Colo knows there's a good chance he can take the dribble hand-off and finish.

Because Webster takes so long reacting to the play, Seraphin has to switch. By the time he even gets screened off by Splitter, his man had already taken the hand-off and a hard dribble to the baseline. But Seraphin takes a really poor angle here and unsuccessfully takes away the baseline, and De Colo scores at the rim.

Here's antoher side pick and roll, except this time it's going toward the middle. Booker hangs back knowing Bonner is a threat to pop out on the other side, so it's Garrett Temple's job to fight over the screen. 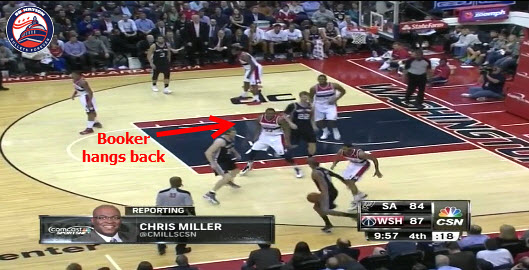 Except, Temple inexplicably goes under the screen, leaving Booker to dart out to contest the three. He's not the only one to go under a Mills screen that night, I caught Webster and Wall do the very same earlier in the game. 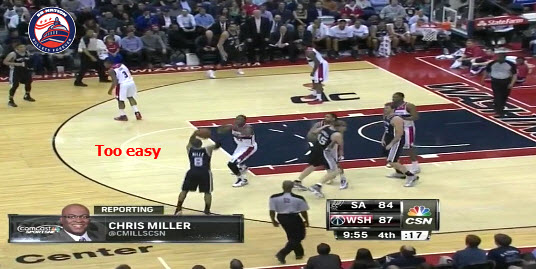 This could've gone either way. Nene nearly had the steal, and if he did corral it, this would have been a huuuuuge play. But in hindsight, should he have stayed on Duncan and trusted the Wizards' defense?

Tough call. Patty Mills gets a pair of staggered screens, and while Wall does a good job of navigating through the first, he's unable to fight through the second, forcing Nene to pick up the ball handler. Mills was just red-hot from the field, so the last thing you want to do is give him a look at the basket. Obviously, it didn't work out well for the Wizards, but I understand the thought process.

In total, I counted 14 defensive possessions that included some semblance of switching. The seven I highlighted above were the ones that ended with a score. The rest led to turnovers or missed shots. As you can see, even the ones that led to a score were often justifiable.

You're never going to completely eliminate switching from any defense around the league, and Wittman certainly didn't imply that in his presser. Still, I don't think you can deem switching as the cause for the Spurs comeback. Other issues -- halfhearted efforts in navigating through screens, a stagnated offense, and a tight rotation -- speak more toward the root of the problem in that game.