Magical Pixels, Wizards vs. Blazers: Washington achieves a winning record, and now we can believe in miracles

The Washington Wizards are 24-23, so beware of earthquakes, locusts, raining frogs, etc.

Share All sharing options for: Magical Pixels, Wizards vs. Blazers: Washington achieves a winning record, and now we can believe in miracles

If you woke up this morning and immediately went to your computer (or smartphone, Google glasses, WiFi-capable contact lenses, etc.) to check whether the Washington Wizards had actually, finally, achieved a winning record Monday by defeating the Portland Trail Blazers, 100-90, rest assured, you weren't alone.

And if, upon seeing that the Wizards, indeed, currently sport a 24-23 record, you immediately refreshed your browser, well, join the club. Can you really blame Wizards fans for being skeptical, after all. We've all but forgotten what it feels like to root for a winning club. Sure, it may have only been five years since Washington had a winning record, but that's eons in terms of sports fandom. John Wall got a max contract before he played for a winning basketball team. Think about that for a second, but not too long, or you might start bleeding out of your ears.

Not only did the Wizards finally go above .500 last night, but they did it by holding the NBA's highest-scoring offense to 90 points, and beating the Western Conference's second-best team two days after beating its best team in the Oklahoma City Thunder.

Wall continued to justify his All-Star selection by recording 22 points, five assists, five rebounds,  and three steals, while generally controlling the game every second he was on the floor. Trevor Ariza was great once again, scoring 20 points while playing stifling defense, and with Bradley Beal, Nene and Marcin Gortat all struggling offensively, Kevin Seraphin picked up the scoring load with 19 points off the bench.

What a win, and what a way to go above .500. As reward, the Wizards tomorrow get to face the San Antonio Spurs, who now have the West's second-best record following Portland's loss. But not to worry, for as of late, these Wizards have doubled as giant killers.

16 - Portland turnovers against Washington, versus just six turnovers for the Wizards.

45.7 - Blazers' shooting percentage against the Wizards, which doesn't seem that great, until you remember that Portland shot 61 percent in the first half. That's some pretty good second-half defense.

86.4 - Washington's free throw shooting percentage against the Blazers. The Wizards made 19-of-22 foul shots, while Portland only took 12 freebies, sinking 11 of them.

Me either RT @cjholley8 I'm not going to acknowledge what's happening until this game is officially over.

OMG there are MVP chants for Wall

Pretty impressive crowd at Verizon Center tonight, per the official box score. Apparently much of DC was there. pic.twitter.com/eWTOMw5Ncx

This is why the #Wizards are over .500 #Brazil #NBA pic.twitter.com/TCEjsLOYEc

lost about .500 RT @dcsportsbog Leonsis around the time the Wiz were last over .500 & Leonsis today pic.twitter.com/gU56H1yo86

DID YOU KNOW: Wizards are the ONLY team in NBA this season to beat Heat, Thunder and Blazers by double digits.

But there could be only one Highlander Tweet last night...

It's never too late, come back anytime #WizBlazers RT @trailblazers Is it too late to join the Eastern Conference? Asking for a friend. 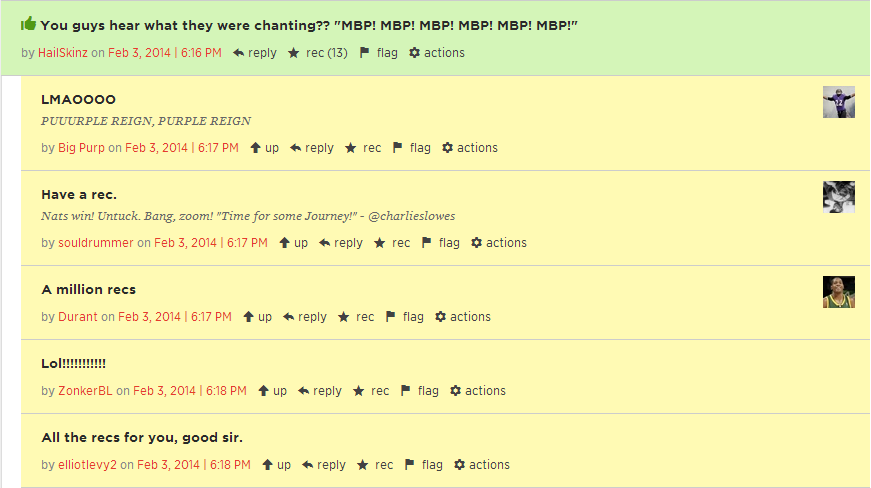 Wizards vs. Blazers: Washington pulls off another upset, eclipses .500