Last night's triple overtime thriller was too good for just one recap. Here's an extended one of the final bits of regulation and the three overtimes.

Share All sharing options for: Raptors vs. Wizards: The necessary extended recap

Last night's recap of the Wizards' 134-129 triple-OT win over the Raptors was short on purpose. We wanted to get something up quick, and frankly, John Wall's exploits were the big story.

But a game that great deserves more. Therefore, here's our extended recap of the key sequences that decided the game.

1:57: It has not been a good game for Bradley Beal. He had missed nearly every shot he took to this point, and he would miss several more in the ensuing three overtimes. But this? This was a huge play. The Wizards trusted him with the ball despite his struggles, and the Raptors trapped him as usual as he came off the pick and roll.

Normally, Beal is stuck in situations like these. This time, though, he somehow wrapped a pass around Amir Johnson's waist to the rolling Marcin Gortat, just before Patrick Patterson could come to help. And-1 opportunity.

This is the kind of pass Beal rarely makes, because at 20, he just doesn't quite have the necessary experience to read the floor. He made it this time, and it should have been a dagger.

Unfortunately, Gortat missed the free throw, which set up ...

1:39: ... Patterson for three. This was a killer because the Wizards played perfect defense. Gortat was in the right spot to contain the drive, and the wings were positioned to help and be able to recover properly to shooters. 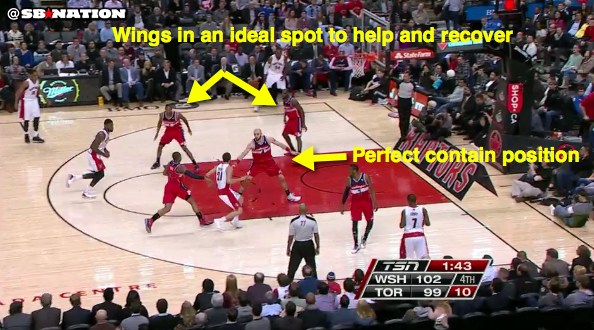 When Greivis Vasquez threw the skip pass to Patterson, Chris Singleton did exactly as he was told. You can't close out any better than this. Unfortunately, Patterson hit the shot. 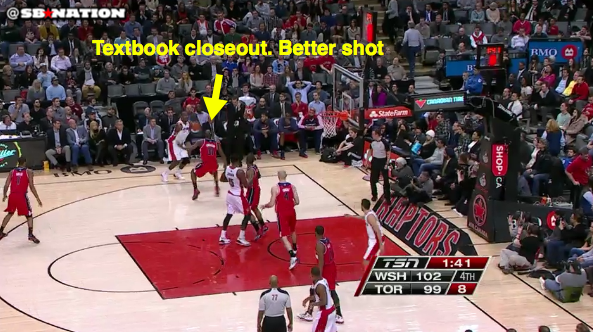 I'd give the tie to the guy who made the awesome play, but the refs didn't see enough to overturn their call. Raptors in the lead. 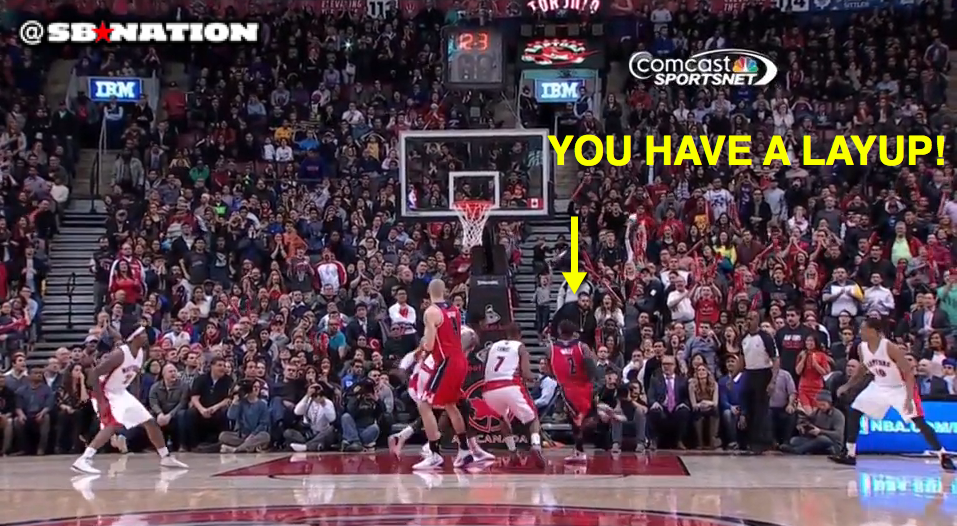 Maybe he was worried about Johnson blocking his shot? Who knows. Thankfully, after Beal missed an open jumper, the ball took a weird bounce off the rim right to Gortat, who put it back in. Tie game again.

0:00: I freaked out when Kyle Lowry got into this position with a head of steam on Gortat charging to the rim. 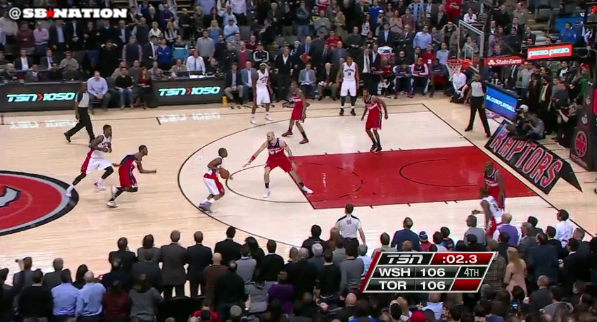 Thankfully, Gortat angled him off and forced a very difficult floater. Overtime.

2:00: Things didn't start well for the Wizards, as Toronto took a four-point lead with 2:14 left on a beautiful pick and roll between Vasquez and Amir Johnson. The play that helped keep the Wizards in the game was, of course, completed by Wall. But watch this AND-1 layup closely.

Rather than screening Wall's man, Gortat assumes that Wall can beat his own guy off the dribble and shields off the help defender. This is a trick the Oklahoma City Thunder use with Russell Westbrook. They figured Westbrook could get by his own guy, so a big man (usually Kendrick Perkins) would position himself in the path of the help defender and clear him out. Once Westbrook inevitably got into the lane, he found no resistance at the rim.

In this case, Gortat diverts Johnson's path just enough to get the hoop. It's a huge one, too, because it's Johnson's sixth foul.

Down two and without the ball, the Wizards desperately need a stop. They decide to trap Vasquez and try to get a turnover, and it works beautifully. Wall cuts off the immediate wing pass to John Salmons, forcing Vasquez to try to throw a lob pass towards the rim. Martell Webster reads it and picks it off.

Then, Wall does the rest.

Holy crap that inside-out dribble. Still my favorite move of all time. When executed correctly, it's unstoppable.

1:19: Boy, the Raptors squandered some opportunities. First, it was Jonas Valanciunas committing a JaVale-like brain fart in trying to tip in a Vasquez floater that was clearly going in anyway. 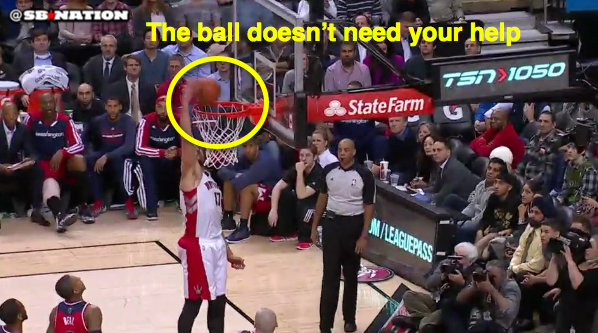 0:54: I'm just going to let this sequence speak for itself.

0:02: Oh man this was painful. When Gortat hit two free throws and stuffed Valanciunas on the ensuing possession, it looked like the Wizards would win. Sadly, Wall bricked a 20-footer and Toronto got one more chance. Here's what happened.

A lot is happening here, and I implore you to view the whole thing.

Toronto comes out with five perimeter players, hoping to get a go-ahead three or at least spread the court. It's a smart move by Dwane Casey and it causes problems for the Wizards. Because Toronto is going small, there's nobody for Gortat to guard, so Randy Wittman understandably takes him out. At that point, the Wizards are -- again, correctly -- instructed to switch every screen. This way, nobody gets open for a three.

For the most part, the switches are well-executed. The Raptors run a version of San Antonio's famous "Baseline Hammer," but Wall is in tune with what's happening, reads the "step-up screen" and switches off Lowry to guard Steve Novak.

Soon, there is a problem, though. Freaked out that DeMar DeRozan has gotten to the basket, Trevor Ariza runs off his guy to protect the rim. Nothing wrong with this, really. But because the Wizards are told to switch everything, Webster's immediate reaction when he sees Ariza is to go look for Ariza's man. Except, Ariza's man is John Salmons, who is way out of the play.

At that point, DeRozan reverse pivots, probably gets away with a travel and fools Ariza, who is playing as if Webster is still there. Webster, though, has inexplicably run away from the rim and DeRozan gets a layup. Smart play design by Toronto, a brain fart by Webster and a lucky non-call on DeRozan picking up his pivot foot.

1:45: The Wizards recover with another Wall/Gortat pick and roll AND-1, and then the sequences of the game happen. Two huge defensive plays by Wall ultimately put the Wizards in control.

On the first one, Wall gets beat, but does not give up on the play. As Vasquez drives with his right, Wall knows that he has no intention of shooting it. So, rather than recovering to Vasquez, he makes a beeline for Tyler Hansbrough. 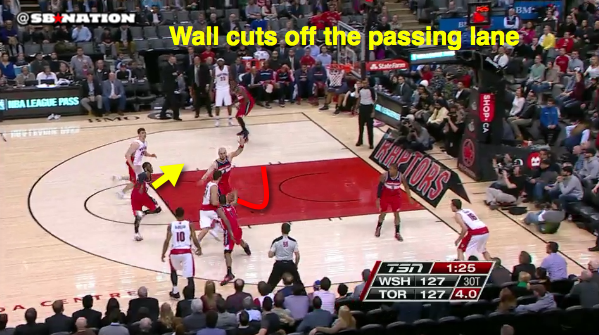 Sure enough, Vasquez tries the righty wrap-around dish, and Wall gets a hand in the passing lane for the critical steal.

On the next play, Wall drops back on a dribble handoff, beats Vasquez to the spot and strips him, leading to another layup. Two huge defensive plays by a guy who was surely very tired.

Exhilarating. Thrilling. Draining. All worth it for the finish.

Next Up In NBA