Playing their first game since learning Nene would miss six weeks with a knee sprain, the Wizards didn't get much production from the Big Brazilian's replacements, but they didn't need it to soundly defeat the Magic, 115-106.

The Wizards passed their first test without Nene, beating the Magic, 115-106, Tuesday hours after learning their starting big man would miss six weeks with a sprained left MCL. With Kevin Seraphin nursing a sore knee himself, Trevor Booker started in Nene's place, with Al Harrington and (drum roll) Chris Singleton coming off the bench.

That trio combined to score 14 points on 6-for-18 shooting. Booker and Singleton did a decent job on the glass, hauling in seven and five boards apiece, while Harrington helped stretch the floor. Still, not the most productive fill-ins. Fans can probably expect Seraphin, when healthy, to take Singleton's minutes and probably steal a few from Booker, as well.

Good news for the Wiz is that they didn't need much from Nene's subs, as the remaining four starters each scored more than 20 points while making more than half of their shots. John Wall scored a game-high 27 points to go with seven assists and only one turnover, Trevor Ariza scored 22 points on 7-of-10 shooting (5-of-5 from three!), Marcin Gortat notched his fifth-straight double-double with 21 points and 10 rebounds, and thanks in part to his nine free throw attempts, Bradley Beal scored 21 points despite taking (and making) only one three.

Good stuff. It's worth noting that Wizards did allow Orlando to shoot 50 percent and outrebound them 45-34, and that this would have been a closer game had Washington not shot a scorching 21-of-28 10-of-16 (75 62.5 percent) from three. As Mike noted on Twitter during the game, a better effort will be needed tomorrow against the Raptors.

Still, it's hard to complain about a nine-point win over any team, especially when it gives the Wizards a four-game winning streak and pushes them one game above .500. Keep it going, lads.

4 - Numbers of Wizards with 20+ points against the Magic.

80 - Three-point shooting percentage of Washington's starters against Orlando. Ariza (5-of-5) and Beal (1-od-1) didn't miss from deep, while Wall shot 2-for-4.

9 - Free throws attempted by Beal against the Magic. More of this, please.

Al Harrington, Andre Miller, Chris Singleton: I haven't seen a Wizards game in a week or so, and this team is very different.

Has to be the most uninspiring 10-point lead I can remember. This kind of effort isn't coming close to beating Toronto.

Somewhere, somebody is saying, "The #Wizards could have drafted Nikola Vucevic instead of Jan Vesely, y'know."

Remember when Webster starting over Ariza was a 'thing'? I do, me. 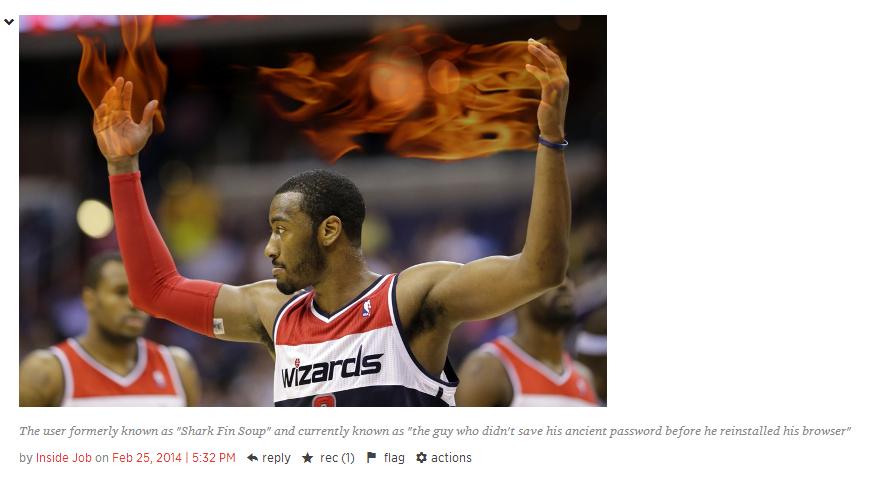