Magical Pixels, Wizards vs. Cavaliers: It's time to #Pray4Nene

The Wizards defeated the Cavaliers soundly, 96-83, for their third-straight win Sunday, but they might have suffered an even bigger loss when Nene went down in the third quarter with an apparent knee injury.

Share All sharing options for: Magical Pixels, Wizards vs. Cavaliers: It's time to #Pray4Nene

Yesterday, it was all about Nene and his last-second, game-winning dunk against the Pelicans. Today, it's again all about Nene, but this time we're all praying instead of praising.

The Big Brazilian went down midway through the third quarter against the Cavaliers with an apparent knee injury. He was immediately ruled out of the game with a knee sprain as the preliminary diagnosis. Nene was set to have an MRI this morning, so get your prayers in quick if you haven't already. Things certainly don't sound good as of now.

The good news was the Wiz, who looked dreadful earlier in the year when Nene was out with injury, hung on and eventually pulled away to beat the Cavs rather comfortably, 96-83. And, as is often the case with this team's winning efforts, they did it with defense.

Cleveland scored only 11 points in the fourth quarter, during which Kyrie Irving was held without a field goal, his only points coming on two free throws. John Wall led the team on both ends of the floor, scoring a game-high 21 points to go with nine assists and only one turnover, while holding Irving to a 6-for-17 shooting night. Marcin Gortat turned in another double-double with 13 points and 13 rebounds, Bradley Beal found a way to score 17 points despite missing his lone three-point attempt, and Trevor Ariza talled a double-double of his own with 15 points and 10 boards.

Oh, and the win got the Wizards back to .500, but it's hard to celebrate that without knowing the full extend of Nene's injury.

5 - Turnovers committed by the Wizards against the Cavs, the fewest Washington has recorded in a game since Feb. 2003, according to CSN Mid-Atlantic's David Devall.

We need all your prayers #PrayforNene

I have heard #nene called Brazilian Jesus on @bulletsforever. If he is, #nene will perform a miracle and heal himself #prayfornene

Three in a row for the #Wizards!! pic.twitter.com/NBdHFNjV4X

Ariza on why they were able to contain Kyrie: "John" .... as in Wall #WizardsTalk #WizCavs #NBA

You can't escape the most powerful force in the universe. #KSLife pic.twitter.com/ztOacNpMrs

My homie why'd it have to be him? #Pray4Nene pic.twitter.com/zylFUHqZIX

We had to switch things up today, because this appeared in the comments of Umair's recap, and it is the most amazing thing that has ever happened. 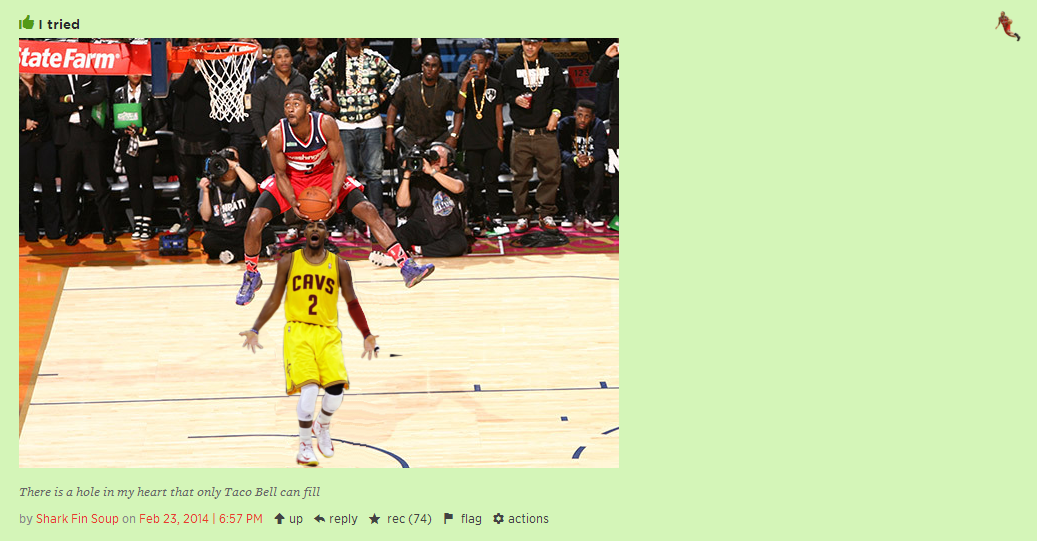