We grade the Andre Miller trade

Better late than never, here are our grades for the Andre Miller deal.

Share All sharing options for: We grade the Andre Miller trade

We've heard from you. Now, it's time for our staff to give their grades on the Andre Miller trade. Apologies for the tardiness, but if you scroll to the very bottom, we have plenty of other fun stuff on the deal to read.

It's fine. It's not something to throw your hands up in the air and jump for joy about, but it's fine.

Reading the Truth About It reactions presents the deal in an interesting light. Over there, I'm seeing a lot of lamenting about how this cleans up yet another Ernie Grunfeld mistake. And it does, no doubt.

But I think the specific mistake that's being cleaned up here is misleading. The only error being fixed by this trade was signing Eric Maynor for the bi-annual exception on the first day of free agency. (And, I suppose, the error of not developing Shelvin Mack and perhaps prematurely releasing Kendall Marshall). An error, no question, but not a particularly costly or uncommon one. A lot of bi-annual exception signings don't work out, and if they don't, it merely costs a team $2 million or so. Even in the new CBA, that's not very much. The process by which Maynor was signed obviously displays the issues in Grunfeld's talent evaluations, no question. But this wasn't some big colossal screw-up here.

All the news and SB Nation analysis of the deadline in one place.

There's a lot of chirping about the admission of failure on the Vesely pick, which I think is misplaced in this specific transaction. A major mistake? Obviously. It's perhaps the biggest one since John Wall arrived. But the cost of that mistake was already felt in the October deal for Marcin Gortat, which, to me, remains the much bigger botched transaction in Grunfeld's portfolio. Gortat is fine, but if the Wizards were getting something out of Vesely, Kevin Seraphin or Chris Singleton, trading a major asset him -- a 29-year-old impending free agent that's due a big payday this summer -- would not have been necessary. And if the Wizards still had a first-round pick and were willing to throw it into the ring on deadline day or another time, they could have been able to get a much better player, considering how everyone else held those assets this week.

Andre Miller, though? He's a useful backup point guard upgrade, acquired for a minimal cost. Even very good GMs have moments like these.

On paper, this is a solid trade. The Wizards desperately needed a backcourt upgrade. They got the best player seemingly available on the market. They were able to rid themselves of a bad contract and under-performing player in Maynor, and they opened up a roster spot by trading away a player who was being paid several million dollars this year to play five minutes every week in an already-crowded frontcourt rotation.

When you dig a little deeper you see it unravel a bit. The team signed Maynor on the first day of free agency without doing their due diligence to explore the market. The idea behind the signing (one I supported at the time, I admit) was to get someone capable of running the second unit to rest Wall occasionally or to help run the first unit if Wall went down again with injury. Maynor, to many people's disappointment, did not prove he was capable of doing that. But he was signed using the entire bi-annual exception and he was dead money sitting on the bench. It's a shame, and he had to be replaced.

So a point guard in his early 20s was shipped out (along with an second-round pick) to bring in a point guard in his late 30s. I like Andre Miller, but he's another bandaid on top of a deeper wound. I hope Maynor hits his stride and gets back to somewhere close to what he once was before he went down with injury a few seasons ago.

Then there's the Jan Vesely situation. It feels like beating a dead horse talking about it again, so I'll just say that I really wanted Vesely to work, and I think him not being used in situations that were suited to his strengths created a negative spiral of confidence that inhibited him from growing and improving in his good areas or any new ones. I hope things turn around for him. There's a place in this league for Jan Vesely. It just wasn't in DC at this time.

So that's that. The team fixed a problem it had. Hell, it fixed three problems: it upgraded the backup point guard, it opened up a roster spot by getting rid of a player it wasn't using and it saved itself a little bit of guaranteed money for next season. But Grunfeld fixed a set of problems he created itself, and this pattern has become habitual.

More on the trade

Nuggets downgrade for no reason

More on the trade

Nuggets downgrade for no reason

That's why I have to give it two grades. The trade works now, but we could have avoided this moment with better planning in the past that kept our present and future in mind.

Trade Grade: B+. Grade for the Course: D

This is a B for me, with the second round pick and obligatory "we only needed this to make up for past Grunfelding" keeping it from being an A. This clearly makes the Wizards a better team, turning the backup point guard position from a glaring weakness to, potentially, a strength. For that, the Wiz gave up two nothings (and I was one of the last remaining passengers on the #AirWolfWagon), and a second-round pick that might have been useful, but probably wouldn't have been.

Assuming Miller's game didn't evaporate into thin air these past seven weeks, he's still a helluva backup point guard, and one that should be even more valuable come playoff time. We here at BF have often pleaded with John Wall to add a little pace to his game; Wall should learn all he ever needs to know about "pace" just from watching the 37-year-old Miller.

All that being said, I'd probably have rather still had Steve Blake (younger, better outside shooter), but Miller is still better than giving up GRJR for Beno Udrih or something else equally revolting.

What were the alternatives? A flier on Austin Rivers, a reach on Beno Udrih or Steve Blake? Now, the latter I'd be a little more happy with, but Udrih and Rivers would not have moved the needle and wouldn't have been worth giving up a second rounder to acquire. We can look at this in context to the rest of Ernie's blunders in the past, but in a vacuum, this was a fine deal that brought back another ball handler.

I'm holding out hope that a) Miller is in enough shape to make a positive contribution and b) that his defensive shortcomings are offset by his ability to run an offense. The Wizards were not getting by in the playoffs running the same bland pick and rolls with Bradley Beal while John sits. At the very least, Miller will give the second unit a competent pick and roll player and another cog in their guard rotation.

A non-rotation player, a guaranteed DNP-CD with another year left, an extra second-rounder the team had lying around for a heady backup in a bad situation? That's quality for pennies on the dollar and high marks every time. Great ending.

But that's not the takeaway. Ernie's head-nodding trades often cover or set up his mistakes and this time it's both; a bust Ernie scouted for several years before draft day and a free agency misfire. The Wizards' GM is a known quantity and neatly executed deals for complementary veterans are something he does well, but it's impossible to divorce a trade from context.

The maneuver is an A- but the context is a D-.

Get news, links and Ziller's #hottakes in your inbox every weekday morning.

The plus about this trade is that the bench for the Wizards should improve immediately. Miller will be able to set teammates up more effectively than Garrett Temple or Maynor. He is also a great ball handler and won't turn the ball over at a high rate. In addition, Miller does make his shots at a good clip, at above 45 percent for much of his career.  The Wizards could also find themselves in the second round of the playoffs now with this upgrade in the backcourt.

The minus here is that the Wizards had to trade two younger players in exchange for a 37-year-old who probably won't play much longer in the NBA.  I wish they could have found a way to acquire a younger player or maybe a second-round draft pick with Miller. This move also appears to be one where the Wizards tried to cover/clean up a mistake from hindsight, namely, the signing of Maynor with the bi-annual exception.

I give it an A-, and it would be higher only if it was a legitimate fleecing of another team. Miller fills a need and should make the bench better immediately with his scoring and passing. Vesely wasn't playing and was ineffective when he saw the court, plus he was out of here this summer anyway, so losing him means nothing. The second-round pick will probably fall in the mid-40s,, and those picks can be easily acquired on the cheap if someone who looks like they would be a steal is available.

The trade makes the Wizards better and they didn't have to give up anyone who was even remotely valuable to them. What's not to like? 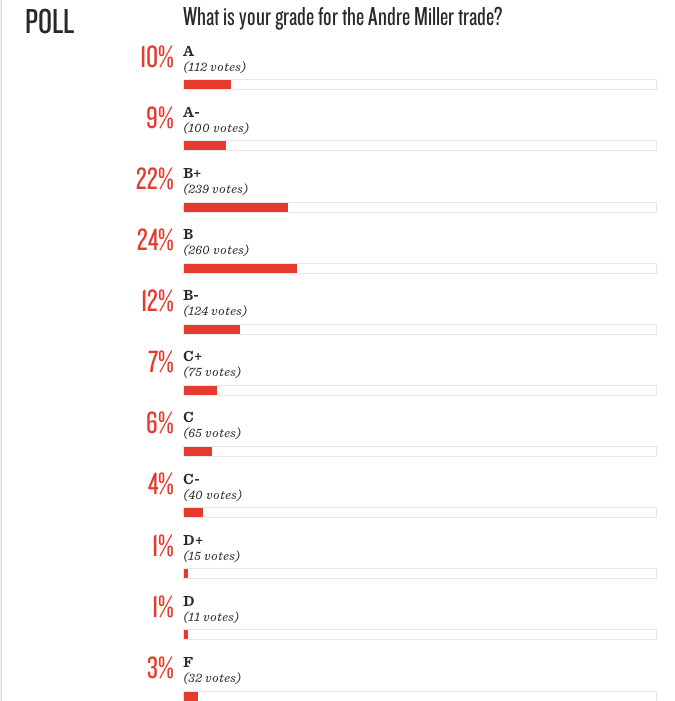