How does Andre Miller fit with the Washington Wizards

Even at the age of 38, Andre Miller has still proven to be a productive point guard capable of running an efficient offense. But how does he fit in Washington, and where might he struggle? We break it down here.

Share All sharing options for: How does Andre Miller fit with the Washington Wizards

Whether you think trading for Andre Miller was another band-aid move by Ernie Grunfeld, this much can be said: the Wizards upgraded their guard rotation in the midst of a playoff run. Washington is all-in at this point because they won't have a first round pick this year, and they pulled off a cost-efficient move that won't significantly hinder their cap flexibility moving forward.

The front office has sifted through several backups since John Wall was drafted before finally landing on the duo of Eric Maynor and Garrett Temple. Maynor, the free-agent signing on the first day of July, floundered in his minutes, sporting a grisly 84.2 offensive rating while unsuccessfully living up to the demands of Randy Wittman's defense. Temple meanwhile, was unfairly thrown into the fire by the Maynor flop and was never more than a plus defender.

Enter Andre Miller, who seven weeks ago was "excused" from the Denver Nuggets following an on-court altercation with head coach Brian Shaw. He's not the most spry point guard out there, and in his limited minutes this season, he's actually been the nominal shooting guard on the floor with Nate Robinson. But he plays a herky-jerky style equipped with an array of jab steps and hesitation dribbles that allows him to veer into the lane and make plays.

There's no way, with four defenders occupying the paint, that J.J. Hickson could have gotten off a cleaner look under the basket without Miller keeping his dribble alive for that split second. He fools Alec Burks with an inside-out dribble as he rejects the screen, then just as Enes Kanter anticipates a dump-off pass to the roll-man, Miller hesitates and continues his drive. Kanter is forced to leave his man to cut off the driving lane, which gives Hickson just enough room to catch and finish.

All of that will surely translate to the Wizards, who, again, lack any sort of improvisation with their second unit. Miller is a fantastic ball handler that always seems to take that extra dribble in order probe the defense for a better look. He's so good at using his body to shield the ball away from his defender, and he's cagey enough to take defenders off the dribble, as he did against Draymond Green to win Game 1 of the Nuggets' first round series against the Warriors last year.

But as good as Miller has been throughout the years, his inability to ever develop a consistent jump shot has caught up to him. It's always been a great mystery how he's quietly stayed effective despite possessing limited tools, but he simply hasn't been as effective as he was in the past when he's coaxed into taking spot-up jumpers. Weakside defenders regularly sag off him in order to deter pick and rolls happening on the other side of the floor, and Miller, a career 22 percent shooter from deep, has no choice but to take what the defense gives him. 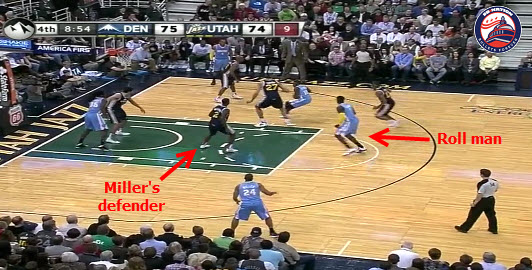 To his credit, he's shot a little over 40 percent from three in spot-up situations the past two years, but that's largely been the by-product of defenses packing the paint. Teams are more than happy to settle for those shots, and we've seen as much transpire early on this season in Denver. Their offense had actually been six points better when Millers sits, per 82games.com. It probably speaks more toward their early-season struggles with a new system, but it goes to show just how much Miller's shortcomings can be highlighted.

But those 10 minutes alone spelling Wall at the beginning of the second and fourth quarters will be a major boon to Bradley Beal's play in the second half of the season. Beal's usage out of the pick and roll continues to climb, but his efficiency has tumbled; he's shooting just 37 percent on such plays, per MySynergySports.com. He's shown glimpses of potential, occasionally getting into the second and third layers of the defense without settling, but they come few and far between. Even his HORNS pet play the Wizards ran so often for him last season has rarely presented itself, as it's been replaced almost exclusively with standard pick and rolls at the wings.

In appreciation of the Professor's passing

SBNation.com's Drew Garrison wrote this fun piece at the beginning of the year breaking down how Andre Miller sees creases in the defense.

In appreciation of the Professor's passing

Miller now assumes full control of the ball, and while he is often criticized for being ball dominant, this will be a welcome sign because of the way the Wizards are constructed. Almost everyone will benefit from the addition of another ball handler, with the exception of Wall, who will have his issues navigating through such a cramped floor if both see time together.

Defense is where a lot of the problems could reside. Miller has never been a particularly strong defender; quick point guards almost always give him trouble, and he's really not adept to playing man to man. I'm sure most will remember Stephen Curry torching him in the playoffs last year as George Karl astonishingly failed to make any adjustments in their match-up.

This year Denver switched a lot of their assignments with Miller in the game to avoid giving up open looks. Brian Shaw went out of his way in placing Miller on the opponents' worst (or slowest) offensive player, but there was only so much they could do before realizing it was best to simply curtail his minutes while opting for faster players at the position. These same issues will arise in Washington unless either Beal takes a step forward in his effort on defense or Wittman adjusts the minutes so that Temple is playing alongside him (which brings us back to the spacing issue). There's inevitably going to be a trade-off in playing Miller.

But Washington's defense has been much better recently and should be able to compensate for Miller, so the risk is worth taking. This should be a nice addition to the team, so long as he's kept in a tight role instead of being allowed to play starter's minutes. I just wish there was an athletic big on the roster than thrives on Miller's beautiful lob passes still on the roster. We'll miss you, Airwolf.