Wizards vs. Thunder preview: Dancing with the Slim Reaper

The Washington Wizards host Kevin Durant and the Oklahoma City Thunder tonight. Here's what you need to know.

Share All sharing options for: Wizards vs. Thunder preview: Dancing with the Slim Reaper

The Wizards return home after going 2-2 on a West Coast road trip. Awaiting them? The Slim Reaper. 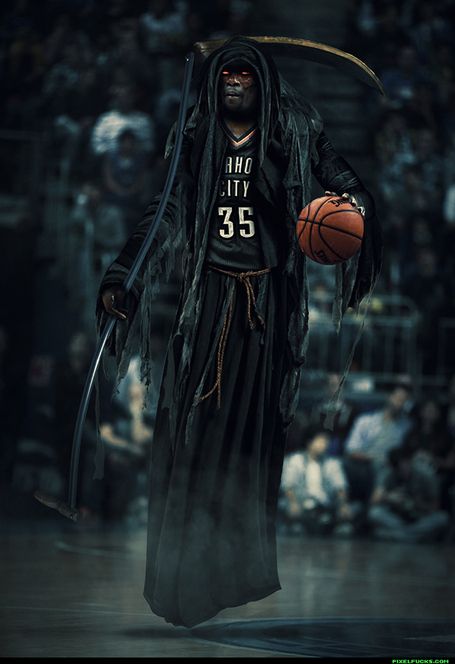 Where and when? Tip off is at 7 p.m. at the Verizon Center.

Are they good? With or without Russell Westbrook, Oklahoma City is a dominant team and has played as well as anyone in the league lately. Kevin Durant, in case you hadn't heard, has been on fire and saw his streak of consecutive thirty-plus point games snapped last night. The rest of the team has been good, too, with Reggie Jackson and Jeremy Lamb in particular having had breakout seasons, Jackson building on the promise he flashed last year and Lamb living up to the hype that led to him being drafted in the lottery. This is a long, athletic team that plays the right way on defense and can run everything through KD and still field an elite offense.

Who's out? Washington is missing Al Harrington. OKC is missing Westbrook and no one else.

What are they good at? Durant has become so good that he can not only create a hyper efficient shot from anywhere on the court at will, he can also pass well enough that everyone else on the team can function as a low-usage role player. Even the more offensively gifted Thunder, players like Serge Ibaka and Lamb, have a lot of trouble creating shots off the dribble but are all more or less gifted shooters and cutters. With Durant drawing defenses toward him and Jackson picking up the slack when Durant sits, the Thunder have put together the NBA's third ranked offense on a per-possession basis despite having only three players - Durant, Westbrook and Jackson - who are averaging more than 1.6 assists per game this season.

What are they bad at? There are a few things but they require at least some level of nit-picking. You could write a book on the subject of how destructive the under-performing Kendrick Perkins has been any time he's not being used to guard a large post player. Durant is playing 38 minutes a night and could burn out late in the season as a result of the wear and tear on his body. The Thunder's best lineups, most of which feature Ibaka at center, Durant and Lamb with Jackson and/or Westbrook, probably don't play enough minutes. Sefolosha's defense is probably overrated. They turn the ball over a little too much. Really, though, teams with far, far bigger problems have won titles, and if Westbrook is around come playoff time, the Thunder have as good of a shot at one this year as anyone.

Who's going to win? Stranger things have happened, but I expect Oklahoma City to win tonight, and there's no shame in that. Washington is a solid team, Oklahoma City is a very good one. Therefore, barring an enormous game from Bradley Beal, who tends to play well against the Thunder, or John Wall, Washington probably comes away from tonight's game 22-24.