Why Bradley Beal is often being used poorly

Bradley Beal's inefficient scoring is on him, but the Wizards' sets that get Beal involved don't help matters.

Share All sharing options for: Why Bradley Beal is often being used poorly

There's been a lot of angst about Bradley Beal recently, and with good reason. While the second-year guard is scoring plenty of points, he's not doing so efficiently and has not demonstrated much of an ability to create his own offense. His true shooting percentage right now is a brutal 49.8, even though he's hitting nearly 45 percent from three-point range. To put that in perspective: Dion Waiters, the Cavaliers' much-maligned draft selection after Beal, has the exact same true shooting percentage.

We expected that from Waiters, though. He projected to be a better version of Jordan Crawford, someone that took difficult shots, had the potential to get hot, but wasn't a versatile enough offensive player to be efficient. (Also: it's worth noting that Waiters has played much better of late and seems to shine when Kyrie Irving isn't out there with him). We did not expect this kind of inefficiency from Beal, and while he's just 20, that's worrysome.

It's no secret why Beal has struggled this year. Forty-seven percent of his shots have been from 16-23 feet, and he's hitting 33 percent on those attempts. Meanwhile, he's taking just 2.1 free throws per game despite playing nearly 35 minutes a contest.

But is this a coaching issue? 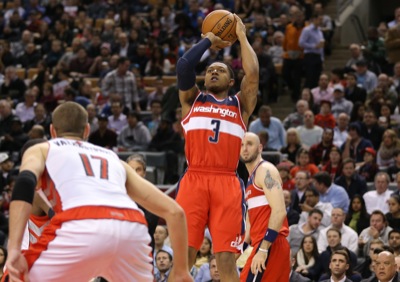 The Wizards are not using Beal the same way they did last season, to say the least. Most notably, they are asking him to create his own offense more often instead of running off the ball. The chart to the right says it all. The frequency of Beal's spot-up opportunities, primarily off John Wall's penetration, have only dropped by 1.8 percentage points, so the switch between coming off screens and shooting off the dribble is the major difference. Many of those curls and catch-and-shoot opportunities within the flow of the offense have been replaced by designed pick and rolls.

Obviously, this isn't working especially well, though I can think of two possible explanations for the changes.

1.  The Wizards are taking the long view: Washington knows how Wall-centric its offense is, and one long-term solution to that problem is to develop Beal's off-the-dribble game. Also: while Wall is an elite playmaker, he can struggle at the end of games because his jumper is still lacking. Beal, meanwhile, has been trusted to make plays late because he presents the threat of the jumper. There may be growing pains now, but the thought is that it'll pay off later.

I'll explain my issue with this point of view below.

2.  Running Beal off screens saps his energy: We all know Beal is coming off multiple leg injuries, and it requires a lot of fitness to constantly be sprinting along the baseline to get open. Perhaps using him as a playmaker will save his legs a bit more? I dunno, just throwing that out there.

Let's talk more about Point 1 for a sec:

WHAT ARE THESE PICK AND ROLLS?

I've written before that Beal gets trigger-happy when coming off ball screens and misses obvious passing reads. He still does, no question. Worse, he still does early in the shot clock, an issue that even the boss of bosses has criticized, though not with Beal directly.

That said, sometimes the Wizards put him in a bad position with the screens they set. Too often, Beal is screened to go towards the baseline, which cramps his options. Teams will run side pick and rolls, of course, but usually they do more work to try to get the ball-handler to go to the middle of the floor, where he has more passing options. Beal specifically is not yet skilled enough to start towards the side and cross back to the middle, so many of these picks sending him to the sideline are counterproductive.

Consider what is happening here. 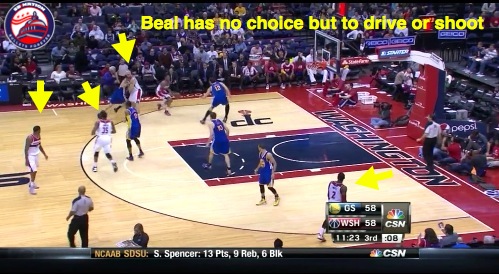 None of the other four Wizards are presenting themselves for a pass. Trevor Booker and Trevor Ariza are horribly -- and I mean horribly -- spaced right next to each other. Marcin Gortat has yet to start his roll to the bucket, and even if he does, he won't be an option because Booker and Ariza's men, noticing how horribly spaced they are, have sunk down to cut off the roll lane. Wall, meanwhile, is a non-option on the other side and doesn't cut to present an opening.

Beal's only options, then, are to shoot or drive on one of the league's best rim protectors in Andrew Bogut. He shoots and misses.

Here's another example of a pick set towards the side without any passing options. 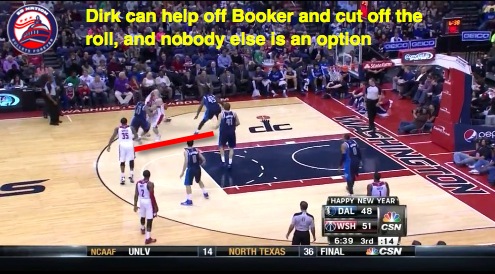 Beal takes an awful shot here over DeJuan Blair, but there's not much else for him to do, again. Dirk Nowitzki pays no respect to Booker from the perimeter, instead cheating down to cut off Gortat's roll to the rim. Wall and Ariza are uselessly stationed on the weakside and are not legitimate passing options because the screen is being set towards the baseline. Beal could throw it back to Booker, but Trevor is not much of a threat from there and his only play would be to re-set the offense on the other side. So, without options and with a trap bearing down on him, Beal panics and shoots.

This is questionable play deployment. The Wizards are taking a player that is naturally trigger-happy from the perimeter and putting him in situations where he has very few additional options.

If the Wizards are going to use Beal in pick and rolls, they must try harder to get him going to the middle of the floor. Rather than have Gortat screen towards the baseline, try to have him and Booker come middle for a double screen before the defense can set up ICE (explanation here) and force Beal to the sideline. Don't play into the defense's hands.

This is an especially good thing to do from the opposite side of the floor, since it would allow Beal to pull up going left if that's indeed the shot there. There is a set the Wizards use to do this and I'm disappointed they don't use it more often. Here it is:

Combine more of that and other sets designed to get Beal to the middle with more devotion to getting Beal running off screens, and I think you'll see his efficiency improve.

As of now, though, the Wizards are helping to exacerbate Beal's inefficiency.