Did you hear the news? John Wall is an NBA All-Star. Here is a report from him and his teammates and coach talking about it. They also talk about Kevin Durant. Martell Webster also does awesome stuff.

WASHINGTON -- Hello. My name is Seth Pollack. I'm a Phoenix Suns fan. I live in Washington, D.C. now (actually Rockville) and work at SB Nation HQ in the DuPont Circle-ish area. Since your Pradamaster has moved to NYC, I am going to help out from  time to time by attending Wizards events like games and practices so I can try and give you some unbiased information for your Wizarding pleasure.

It is not easy to change from being a fan of the team you grew up with (and covered for five years) to some other team where you now live, so I'm not going to try. Fortunately, I don't hold any personal animus towards the Wizards, which I think separates me from you fans who seem to have many years of hard-earned anger and distrust for your team.

Anyway, let's try and be friends, OK? You can follow me on Twitter if you like, but be warned that I will talk about the Suns a lot and also cycling. I like to ride my bicycle. Do you?

Here's my first dispatch from the Verizon Center. I went to Friday's practice and took some quotes about Mr. Wall and Mr. Durant and also Martell Webster's mom's hat.

As I am sure you guys know very well, the Wizards head coach is a very careful man when he speaks to the media. Compared to many other coaches I've talked to I will just go ahead and call him boring. Boring isn't always bad, mind you. But there you have it ... at least as I see it.

"As I told the team, it's a testament to them too. A lot of times you have to put yourself in a position as a team to be winning, be in the playoff race, and to be fighting like we are. And when you win, good things, accolades, come your way both as individual and as a team."

"(Wall) still has a lot of room for improvement. Hopefully, this will just be a stepping stone for him to continue to become better."

Here, I tried to get Randy to say something mildly interesting. I asked him about his vote for reserve All-Stars and guys who didn't get in. He didn't take the (admittedly poorly) baited hook.

"Every year there's going to be people slighted. You guys, I'm sure, have already debated those things."

He went on for another full minute talking and not answering the question. That's solid filibustering skills.

Martell has been around the league for awhile and I'm sure I've talked to him before when he was in Portland. But I'd forgotten just what a great character he is. Funny guy. 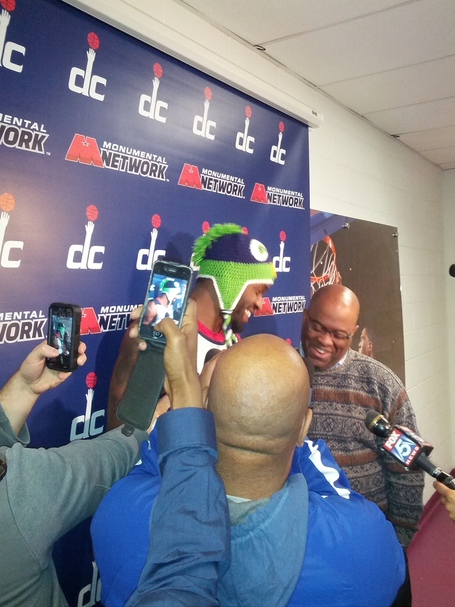 That "kid" being John Wall. Of course.

"Both of them are going to go out there and represent this organization."

I am just going to stop right here and point out that the Phoenix Suns have a better record (28-18) and currently have no one representing their organization. That is all.

Martell said Kevin Durant is playing like Michael Jordan right now. He said that KD is going to get his (points) and the Wiz need to make sure no one else goes off. Also, it takes a village to hope to contain him. etc.

And then Martell was asked about the Super Bowl so he stopped the scrum, ran into the locker room, ran back out wearing a hand-knitted Seahawks hat that his mom Leslie made. Martell is awesome.

He wants you to know about this website: http://eurostyleyourlife.com/

Bradley had to run to a doctor's appointment so he didn't talk long. He had no update on any changes to his minutes limit. Maybe after seeing the doctor. I don't think he actually ran to the doctor's office but I can't say for sure.

"Very bright," Beal said when asked about the future of the Wizards backcourt.

John came out of the locker room at 2:30pm which was an hour after practice ended. He's big time now. Then he said nothing much.

"I just want to say thank you to the coaches and fans and everybody who voted for me. It's a big honor. I just want to congratulate my teammates and coaching staff. Without those guys I wouldn't have the opportunity to reach this goal. It's just shocking."

John went on to call Kevin Durant the MVP of the league right now. That might be news. I don't know.

At this point I am going to pat myself on the back for not putting up any stats comparing Wall to Goran Dragic. Every cell in my body is telling me to look that up and stuff but I am trying to be respectful of my new Washington home. It's going to be a process. Please be patient with me. Good day.

Here's a Vine of my old friend Marcin Gortat doing some low post drills with Jan Vesely. I would ask that you not read too much -- either way -- into the results of this one engagement that I happened to capture.