Last year's Wizards' defense was much more traditional and conservative. This year, they are trapping ball-handlers and engaging in far too many switches both on and off the ball. Maybe that's why the defense has fallen off.

In Randy Wittman's first full season as head coach of the Wizards last year, he constructed a defense that allowed his team to control the boards and cut off the paint. Wings would fight over screens, bigs would stay back and patrol the paint -- moving only to cut off dribble penetration -- and above all else, force the opposition into as many midrange jumpers as possible. 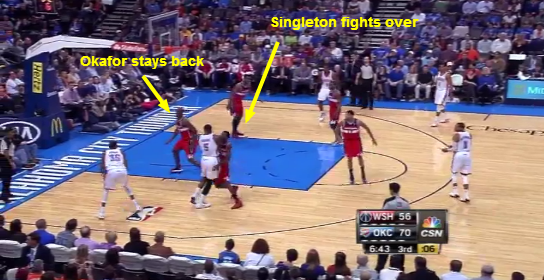 Kevin Durant comes off a baseline screen in this clip from last March, but despite Chris Singleton getting crushed by a Kendrick Perkins screen, Emeka Okafor stays back and cedes the open look. On the few times the bigs would come up and defend the pick and roll or shooters running off screens, they would soft-hedge, i.e. "show" on the ball handler before retreating to their man. Using this strategy, the Wizards placed ninth  in total rebounds that year, while John Wall continued to assert his will on defenses with relentless pushes in semi-transition.

But without Okafor, the Wizards' scheme looks different this year. And I'm not sure it's for the better.

This season, the Wizards have often resorted to switching in order to contain ballhandlers. The idea is for the defense to take advantage of its size and athleticism and to avoid help and recover situations where defenses are most vulnerable. Whether it be through pick and rolls or off-ball movement, players are switching assignments at a stunning rate. Alternatively, they are more aggressively trapping and switching assignments later to compensate for being in rotations.

While it's often led to turnovers and disrupted the offense's timing, it's just as often proven to be a cheap way of avoiding fighting through screens. Ultimately, it leads to mismatches all over the floor.

The coaching staff has curiously imparted a ton of faith in their players, and it yielded some gaping holes in the Wizards' defense on Wednesday night against the Mavericks. Players will be quick to point out the heaps of missed shots and blown opportunities, yet so little is being made of the Mavs doing the exact same. You're not going to get many nights where Dirk Nowitzki and Jose Calderon each shoot 3-14 from the field on those kind of looks. The loss could have, and probably should have, been much worse.

One of the easiest and most fundamental ways to beat a switch or hard-hedge is to slip the screen. This only works with optimal floor spacing and big men capable of moving well off the ball, but when it's done correctly, it adds a whole new element to your attack. The big has to anticipate when his defender jumps out for the switch, and before he's able to set the screen, he'll slip into creases of the defense as Brandan Wright wisely does here in both instances.

These plays happen so quickly that Kevin Seraphin and Trevor Booker barely have time to process what's going on. Part of this is just on their sheer inattentiveness, but it stems from the fact that they're instructed to jump out aggressively on every ball screen they see. The problem is the Wizards often don't have the means to proactively attack the ball handler, and as they inch toward the thick of the playoff race, these types of plays could be the difference in a tight ballgame.

The Wizards probably switch and trap along the perimeter more than any team in the league not named the Knicks, and it's led to a giant discrepancy on the boards. The Wizards currently rank 28th in the league in total rebounds, which is somewhat understandable given Nene's minutes limit and the continued struggles of Marcin Gortat, who has been held to eight rebounds or less in the past four contests. But they're doing themselves no favors by taking their bigs out of the paint and forcing them to defend ball handlers along the perimeter.

This dilemma was on full display in the final seconds of their loss against Dallas. After two crucial stops where the Wizards forced a turnover and lucked into an open missed three by Dirk, the Wizards needed just one more stop to get the ball back and potentially send the game into overtime. Monta Ellis will bring the ball up with 41 seconds to go and will engage in a high pick and roll with Dirk.

Martell Webster inexplicably leaves Blair to defend Dirk, leaving BradleyBeal in limbo. This doesn't immediately lead to a Mavericks shot, but it changes the entire floor dynamic and leaves a lot mismatches for Dallas to exploit.

Beal will eventually retreat to Vince Carter along the wing while Webster stays on Dirk. To further complicate things, Calderon will cut through the middle of the floor and into the weakside corner. The Wizards have notably switched all off-ball movement along the baseline, especially when in rotation, so Wall does what he's been told to do all season: point Trevor Ariza in the direction of Calderon, and assume the burden of guarding DeJuan Blair, who has a good 70 pounds on him.

Except, Wall doesn't even attempt to put a body on Blair, and instead runs to Ellis in order to block off his lane to the basket. Problem is, Ellis made up his mind well before that, and takes the jumper over Nene. Meanwhile, DeJuan Blair casually awaits his offensive rebound.

Blair gets the easy board and the Wizards are forced to send him to the line, where he makes both free throws. That essentially sealed Dallas' win.

A drop-off in defensive efficiency was looming the minute Okafor's injury happened, but while the Wizards still remain a middle-of-the-pack team in that regard, they still haven't played up to their full potential. Last season, they gave up over 25 midrange attempts per game per NBA.com's stats page, a benchmark for any good defensive team. They regularly clogged up driving lanes and forced ball handlers into inefficient jumpers.

Now, opponents are shooting fewer jumpers, attacking the rim off dribble penetration and shooting threes at a much higher clip. Some of this is compounded by the lack of a rim protector, but it seems like the team is more concerned with gambling for steals and preserving energy than defending solidly.

Perhaps it's time to dial back the pressure and again defend conservatively.