H2Owned: How John Wall and the Wizards' defense iced the Splash Brothers

The Wizards went back to their roots on Tuesday night and played stifling defense against the Warriors by holding the backcourt of Stephen Curry and Klay Thompson to just 13-40 shooting.

Share All sharing options for: H2Owned: How John Wall and the Wizards' defense iced the Splash Brothers

Tuesday's Wizards-Warriors had a similar build-up to their previous matchup on January 5 in Washington. Both offenses couldn't hit the broad side of a barn early, thanks in large part to John Wall's stifling defense on Stephen Curry, but it only seemed like a matter of time before the Warriors flipped the switch and revved up their intensity.

Sure enough, Golden State came out of the second half firing from all cylinders, opening up a 30-5 run on the helpless Wizards. Before you know it, the game was over by the end of the third quarter.

You were probably expecting history to repeat itself last night. Instead, the effort was sustained, and the Wizards came away with an 88-85 win.

Wall answered the call once again, but this time for the entire game. He refused to let Curry cross half-court unguarded, relentlessly fighting over screens and yelling at his bigs when they failed to step up on the other side. He almost always had a hand in Curry's face. By my count, he held one of the greatest shooters in the game to just 3-10 shooting when he was the primary defender, and he also pressured Curry into three turnovers. This is without even mentioning the job he did on the possessions where he switched onto Klay Thompson.

Wall was especially brilliant in funneling his man into help. He stayed on Curry's hip and forced him into off-balanced jumpers. More importantly, he didn't sulk in transition, where Golden State is at their best. No team uses more drag screens to free their shooters before the defense is set, and no player is more effective at finishing those plays than Curry. Beyond his shooting, he's an incredible passer and an equally good ball handler, which makes any defender's life a living nightmare.

But even Curry can't do much when this is the kind of coverage Wall steers him towards. 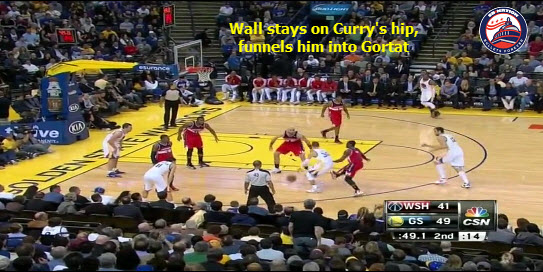 This was a whole new side to Wall's game we've seen in only spurts throughout his four-year tenure in DC. We are so accustomed to seeing him sit back and play free safety, and while it's justified considering the burden he carries on offense, it does have a tendency to backfire on him. It led to Phil Pressey having a career night against him, for example. But when Wall is locked in like this, he shows why he could be the league's best defensive point guard if he could only focus every night.

Of course, you don't hold a potent offense like the Warriors to 85 points because of only your point guard. This was a team effort through and through, and while there were lapses in concentration from the bigs at times, it was easily the team's best effort all season and reminiscent of last year's top-10 ranked defense.

What made that defense so dangerous was that everyone worked in unison with one another. Wings didn't switch off the ball as often, and when they got caught up in screens, bigs would show a little higher on the ball handler. And while all of that is happening, the opposite wing would collapse into the paint to contain the roll man. It was a series of pinpoint rotations bolstered by the prowess of Trevor Ariza and Wall playing the passing lanes.

This sequence in the third quarter displayed those qualities best. Warriors coach Mark Jackson deploys the Splash Brothers in so many different ways, so there's a lot for a defense to process. Here, the Warriors have the two come from opposite sides of the court on the baseline to loop around the other end while crossing in each other's paths. As they so often do, they'll have one screen for the other, which normally generates a switch to throw off the defense.

But Wall doesn't take the bait, as he's often done this season. 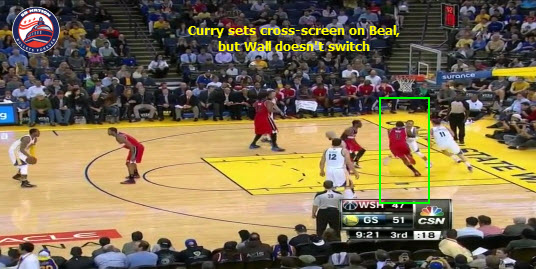 This is a timing set, and the Warriors know there's a good chance Klay doesn't come off the screen cleanly. So, they go to option 2. Curry will pause briefly before curling around Bogut's screen.

Wall had been on Curry like glue throughout the night, so there was absolutely no shot at him breaking away for an easy catch-and-shoot.

This quickly turns into a pick and roll, which Wall successfully forces to the baseline -- this is known as ICEing or Downing a pick and roll. From here on out, it's just a matter of making the proper rotations. Gortat keeps Curry from penetrating the lane, and Ariza is at the nail -- the spot in the middle of the free-throw line, where help defenders should be standing -- awaiting Bogut's roll to the basket.

Nene reacts and slides over to defend the basket, forcing Bogut to give up the ball. From there, the onus is on Beal to make the correct read. Knowing that he can't leave Thompson in the corner, Beal jabs at Andre Iguodala instead of fully engaging with him. This brilliant maneuver, known as "stunting," allows Beal to play two shooters at once.

It wasn't the cleanest of rotations, but Beal got there just in time to contest the corner three. They may have ceded an open look to Iguodala in the process -- a 51 percent three-point shooter in spot-up situations this year per MySynergySports -- but the defense managed to shut down three different options in the span of one possession. Against a team fielding the type of offensive firepower the Warriors possess, it's all you can ask for.

There was certainly some terrific individual efforts last night as well. Nene's switch onto Curry on Golden State's penultimate possession late in the fourth and Ariza's defense on Curry on the final play were the two that standout the most.

But this was by and large the best team defense we've seen the Wizards play in quite some time. And more importantly, it's a good marker for this team moving forward, particularly as they jostle for playoff seeding in a month or so. They're still capable of playing this way without Emeka Okafor manning the paint, and while Wall was noticeably gassed toward the end, there's no reason to believe he can't kick into this gear during pressure-packed games.