What are the Wizards? A statistical profile

Share All sharing options for: What are the Wizards? A statistical profile

You probably have seen the two long pieces Ted Leonsis published on his blog that list a bunch of advanced statistics, generally in the Wizards' favor. Leonsis is using many of these numbers to show that the Wizards are a pretty good team, as you'd expect him to do. Nevertheless, they are very illuminating. I strongly suggest you check them out.

Big-picture, this only further drives home that the Wizards, like a growing number of NBA teams, are plugged into analytics. In many cases, teams have numbers for things you'd never even think of counting. This has been an area of emphasis for Leonsis since taking over. In the past few years, the Wizards have begun consulting with a statistician named Joe Still and were also one of the first teams to subscribe to the SportVU cameras before the league purchased them for all 30 teams. Leonsis gave a glimpse into the potential of these tools in an interview with us two years ago:

We also use this information when evaluating players on other teams as we contemplate acquiring a player through free agency or a trade. Recently we signed A.J. Price to add some depth to our backcourt. We used our statistical analysis to determine that when Price was on the floor for Indiana, the Pacers were No. 1 in NBA defense efficiency. When he wasn't on the court, the Pacers fell to 16th in defense efficiency. So that gave us some additional important information when we were doing our due diligence prior to signing him.

But of course, data isn't success. Just because you have and use the best data isn't enough to win. As we sit here on January 2, the Wizards are 14-15. They are not a great team; at best, they are a little better than their record. The Wizards surely know everything that's going to be presented here, but let's dig a bit deeper to see what they do well and what needs work. 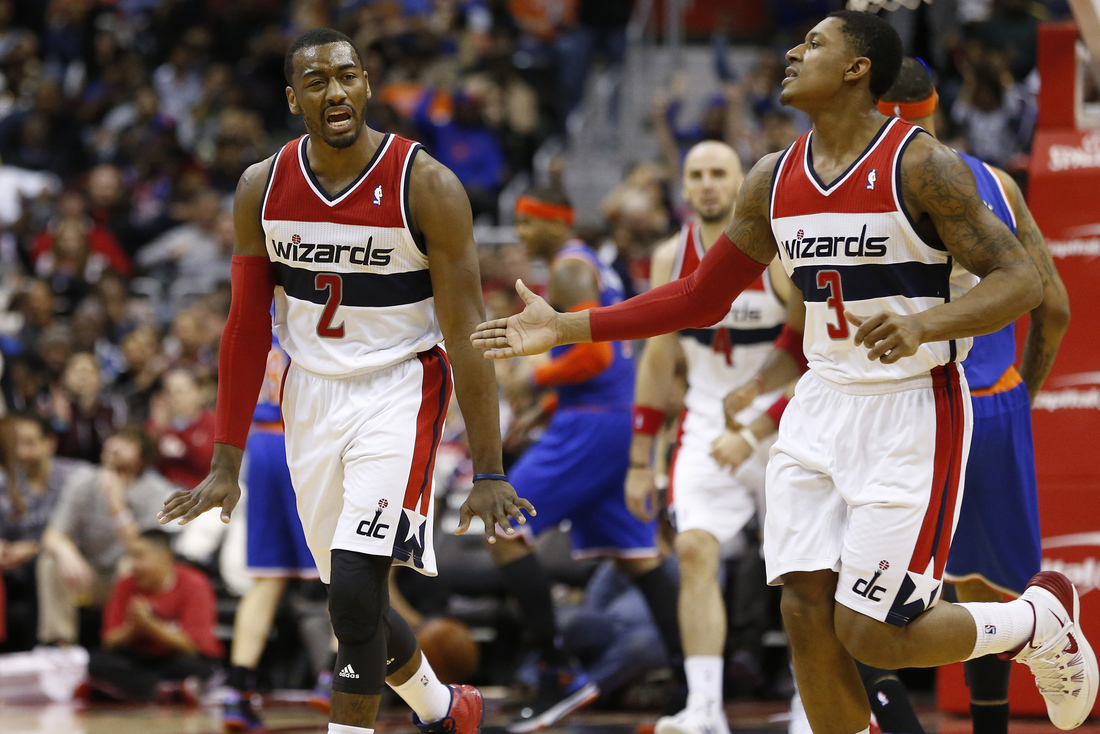 The core is strong: The Wizards' best five of John Wall, Bradley Beal, Trevor Ariza, Nene and Marcin Gortat is outscoring teams by over 22 points per 100 possessions this season, according to NBA.com. (I say "best five" for a reason: Nene has been good as a sixth man because it's preserved him and helps balances other lineups). Concerns that Ariza would struggle as the starter over Martell Webster have mostly been unfounded.

The most-used lineups are faring well: In fact, the Wizards' four-most used lineups are all in the black. The three lineups that include different combinations of the team's top six players (Webster as No. 6) are all outscoring opponents by over 12 points per 100 possessions. The fourth lineup is the current starting group, which is at +2.8/100 possessions.

The three-point profile is good: Remember when I noted that the Wizards' three-point shooting discrepancy between corner attempts and above-the-break ones last year was both weird and troubling? That has corrected itself this year. The Wizards are second in corner three attempts per game this year, and while their percentage on those shots is down a bit (40.5 percent), that's been made up by a huge jump in above the break three-point percentage. At 38 percent, the Wizards rank fourth in the league at those attempts. This means that the Wizards really are a dangerous three-point shooting team and not just one that capitalizes on wide-open looks from appetizing spots on the floor.

They are forcing lots of turnovers: The Wizards are tied for fifth in the NBA in opponent's turnover percentage, forcing teams to cough it up on nearly 16 percent of their possessions. That's up from 12th last year, and it's important because it gets the Wizards into the open floor, where they are dangerous. Fast break finishes account for 15 percent of the Wizards' offense, and Washington is third in the NBA in points per possession on those plays, per MySynergySports.com.

John Wall: Now that we have SportVU access, we can see how important Wall's passing is for the Wizards, even if his shooting efficiency comes and goes. Don't look at his TS%; Wall has been the East's best point guard this season. 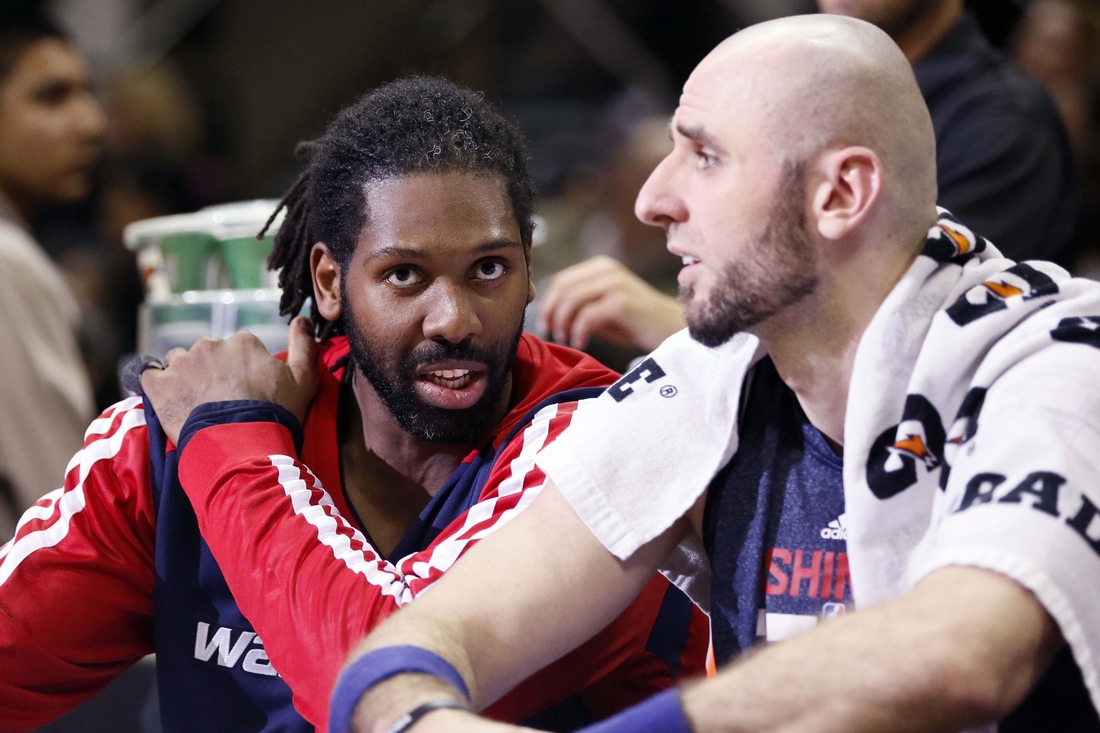 The shot defense is down: We'll have more on this in a day or two, but the Wizards' defense has fallen off a bit when replacing Emeka Okafor with Gortat. Last year's team was eighth in defensive efficiency; this year's team is tied for 14th. The biggest culprit? Shot defense. Last year's Wizards' scheme was much more conservative, which resulted in fewer turnovers, but also in fewer open shots. The Wizards allowed teams to shoot an effective field goal percentage of 48.3 percent last year, sixth in the NBA. This year, that number is way up to 50.9 percent, which is 22nd in the league. All those traps and switches have not been good for the Wizards.

The Wizards shoot too many long 2s: This was the case last year, and this is again the case this season. Only Portland shoots more 16-23-footers per game than the Wizards this season. The Blazers can sort of get away with it because they are second in the league in percentage on these shots. The Wizards, meanwhile, are 26th. That's not going to cut it. This is a problem Leonsis himself acknowledged in his second post.

If there is one thing we could do most to improve as a team, it would be to NOT take 22 foot shots early in the shot clock.

Bradley Beal is the biggest culprit here. The second-year Wizards guard has taken 155 mid-range shots this year and hit them at a 34-percent clip. For some perspective: he's taken nearly as many mid-range shots (155) as he has shots at the rim AND from three-point range (158). Wall also takes a ton of mid-range shots (205, to be exact, which is a massive number), but he at least gets to the rim (135 shots in the restricted area). Stunningly, Wall shoots 38 percent from mid-range, which is much better than Beal.

This is one of those times where you have to wonder if the coaching staff is in lockstep with management's vision. We hear so often from players that they are encouraged to take the open mid-range shot if it's there. You may also remember Sam Cassell saying very clearly during Summer League that Chris Singleton should be shooting mid-range shots instead of threes. Bottom line: the shot distribution is troubling.

The Wizards don't get to the line: Perhaps the biggest reason for the above: the Wizards don't shoot free throws. Only Wall is a threat to get to the rim, and that allows defenses to pack the lane and make the Wizards beat them over the top. Only four teams have a lower free-throw rate than the Wizards this year. Worse, when they get there, they are just 23rd in the league in free-throw percentage. When you can't drive, you are not a good offense, even if you shoot the three well.

They still aren't deep: The top seven Wizards all have PERs above 13.7 (Beal). None of the remaining eight don't have a PER above 10.5 (Kevin Seraphin). Contrast that to teams like the Hawks and Pistons, who each have 11 guys with a PER above Seraphin's.

All this explains why they're an average team.