Wizards vs. Bulls: How Nene and John Wall saved the day

A quick breakdown of the final Wizards defensive stand.

Share All sharing options for: Wizards vs. Bulls: How Nene and John Wall saved the day

I watched last night's Wizards-Bulls game on DVR knowing the result, and even I was nervous about the final play. The Bulls had tied their game on Wednesday against the Magic with a three in the first overtime, and one could easily forsee a similar result.

Thanks to Nene, though, we know that didn't happen.

But this play wasn't just snuffed out by a great individual effort from Nene. The Wizards defended the sequence about as well as one can defend an after timeout play.

The Bulls start in a stack formation, one that's common around the league and one that's somewhat similar to the play against Orlando. One can surmise that a series of curls and screens are coming, but there are so many different possible combinations that it's hard to key in on anything. 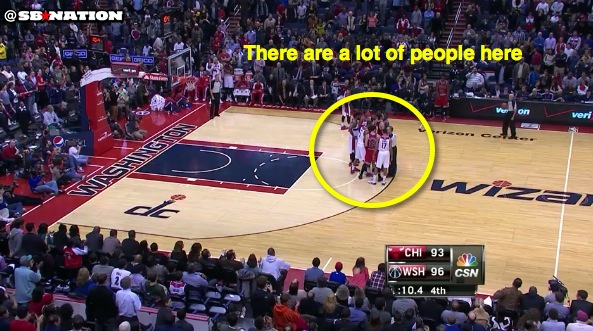 Right away, the Wizards must make two decisions. First: With a three-point lead, should they foul and prevent the Bulls from getting a shot off? There's a school of thought that teams should always be doing this, but the Wizards decide to play things out instead. It's the right decision because the Wizards are a poor free-throw shooting team, putting them at a disadvantage if this became a charity stripe contest.

Second: How do they defend those screens? Here, the Wizards make a more conventional, yet still correct decision to switch everything. That way, the Bulls can't exploit the split-second opening that might come from one of the Wizards being a little late to get over the top of a pick. The Wizards have the perfect lineup to carry out this task, with interchangeable wings in Garrett Temple, John Wall and Trevor Ariza, as well as a big man in Nene that can defend quicker players. Obviously, this becomes important as we roll forward.

The play begins with Tony Snell running away from the stack. At first glance, it looks like he's going backdoor, which would make him a threat that the Wizards' back line must cover. The Bulls want the Wizards to think this because it'll allow the man coming to the ball a cleaner catch. But Washington senses that Snell's move is a decoy, and they don't provide help for Bradley Beal, allowing them to focus their attention on the Bulls' main option. 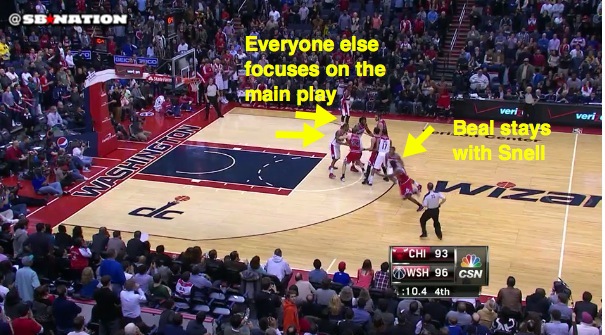 Nevertheless, Mike Dunleavy, the man who tied the game in Orlando, breaks through. Crisis? Thankfully, no, because of two things. First, the switch-everything philosophy has the other three Wizards on high alert to help. Second, and more importantly, Wall, who was not pressuring the inbounder in another great call by Randy Wittman, reacts quickly to the situation and runs right at Dunleavy, preventing the shot. 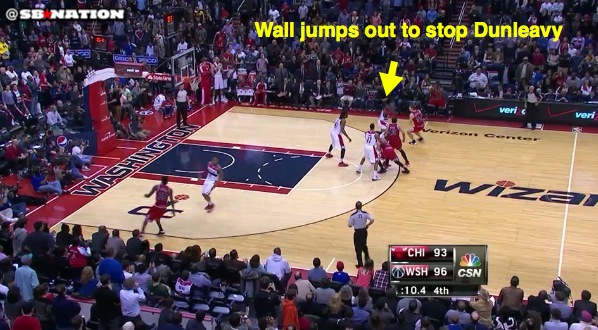 This presents another potential problem, though. As Hubie Brown loves to say, the most dangerous man in an out of bounds play is the inbounder. With Wall coming to Dunleavy, someone must pick up Jimmy Butler. As it turns out, that somebody is ... also Wall. Upon running at Dunleavy, Wall immediately realizes the plan is to give the ball back to Butler and adjusts accordingly. It also helps that Dunleavy gave the ball back too quickly, allowing Wall to easily close the gap. 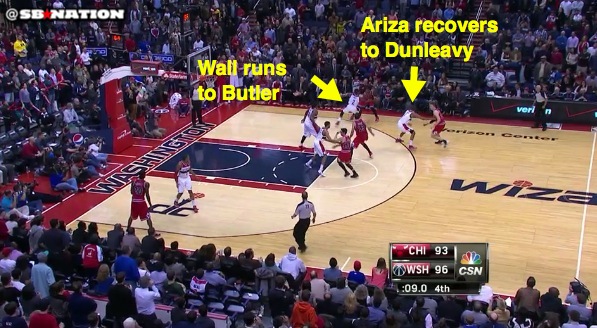 From there, the Bulls ad-lib a pick and roll with Butler and Noah. Wall momentarily forgets that he's supposed to switch, which leaves Noah wide open for a second. Luckily, Nene's hard hedge is so strong that Butler can't see the pass, and by the time he does, Wall has switched. 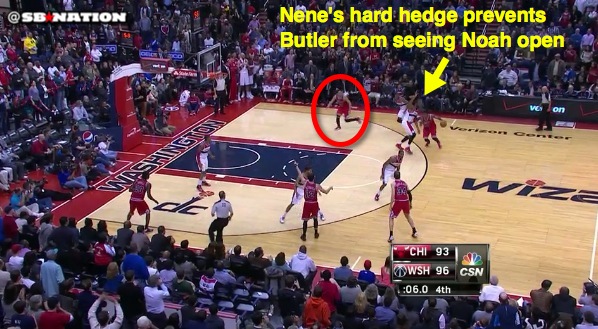 From there, Nene just has to prevent Butler from getting a good look, which he does in emphatic fashion. And thus, a win was saved.