The Wizards don't panic: How the win over the Bulls was kickstarted in the third quarter

While Nene's emphatic block was the perfect end to this gritty game, this game really changed during a two minute and 32-second stretch of the third quarter.

Share All sharing options for: The Wizards don't panic: How the win over the Bulls was kickstarted in the third quarter 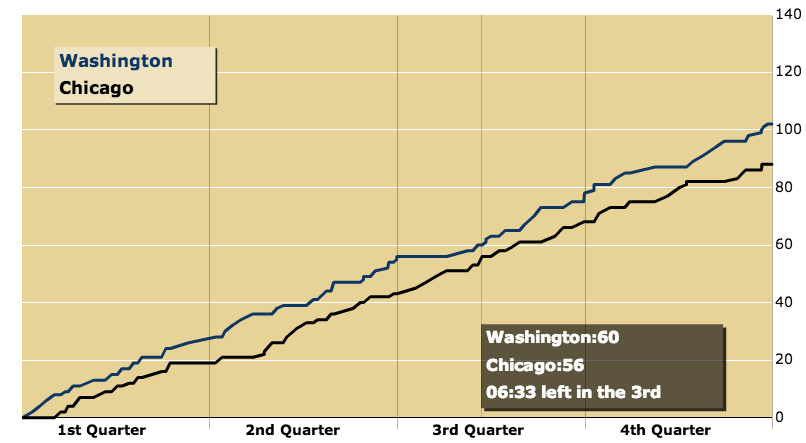 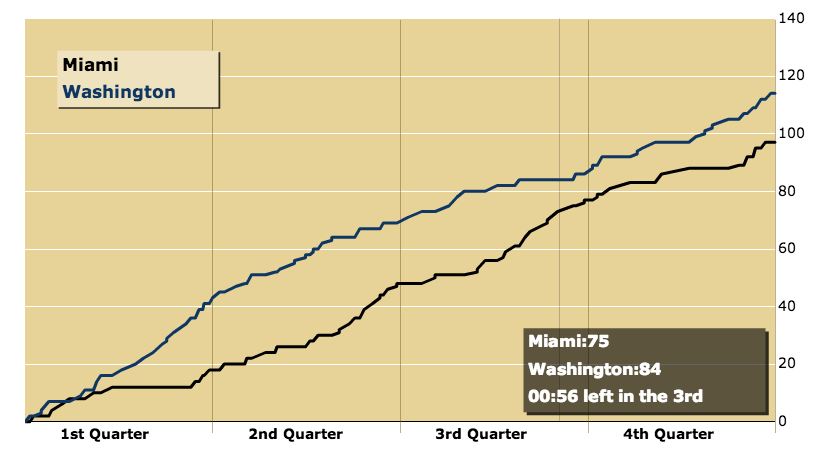 And last night vs. Chicago: 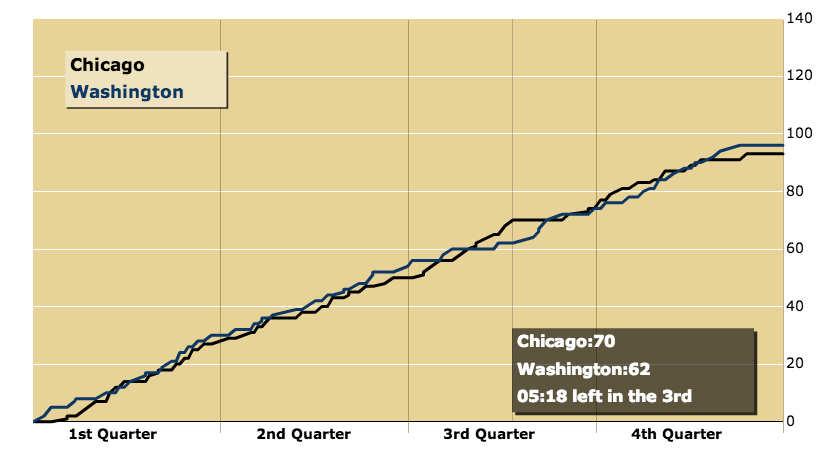 And it was during that particularly worrisome stretch in the third quarter that the Bulls charged from four points down to take a very commanding eight-point lead.

And then, it happened. Here's what it looked like in the play-by-play (via ESPN.com):

That moment -- right there, all two minutes and 32 seconds of it -- was the momentum shift that won the crowd back, won the Wizards' confidence back and can arguably be credited for giving the Wizards the oomph to win this thing.

Oh, and in case you didn't see what that sequence looked like, check these out (via @danecarbaugh):

I mean... what? How is that real? Did John Wall really make that? Was that a dream?

"It was a big shot for us," Bradley Beal said after the game. "It was definitely one that we needed because Chicago went on a big run... and that shot by John was definitely a big time shot by him. "

And thanks to that shot, the crowd was thirsty for blood. Luckily for them, on the next trip down, Martell Webster delivered. Beal said, "Martell Webster had a big three in [the third] quarter." Honestly, I think that's an understatement. Check out the video for yourself.

You can see (almost in slow motion) Webster with the ball in his hands with no one in sight, winding up, and in the background the crowd is rising to its feet in anticipation of that big three. If it goes in, it's a tie. If it doesn't go in, then hearts are broken all over the arena.

And I can say, as much as that Wall circus shot got the crowd back into it, I don't think I remember ever seeing the crowd collectively rise up in hope and anticipation as they did for that Webster three. For the tie.

Oh, and a little cherry on that comeback sundae: Wall for the lead.

After the game, Randy Wittman credited the team on their ugly and  "gutty" win:

"We got down eight there in the second half and just kept pecking away," he said. "We got four stops in a row when they went up eight and we were able to convert at the other end and get the game back to even."

It wasn't our most prettiest win, but it was a gutty one. -Randy Wittman

A lot can be said about the differences in defense between this year's Wizards and last year's (and we've said a lot about it on this site), but as the team continues to play and grow together, their collective composure and intelligence only gets better. That's a great sign for an up-and-coming team.

And while the Wizards have learned to beat their road woes, I think they're starting to consistently beat an even more dreaded opponent: The game-deflating run.

"I think last year we panicked a lot," Beal said after the game. "But this year ,we're way more poised. We get a lot more stops down the stretch on defense, and we execute on offense as well. So I think we do a great job of staying the course and executing when we got the opportunities to."

And to what does Wall credit the team's mental difference this year?

How Nene sealed it

Breaking down the Wizards' defense on the Bulls' final after-timeout attempt to tie it.

How Nene sealed it

"Like what coach told us ... Everybody's going to make a run," he said. "You just got to withstand their run and stick with your concepts of playing defense the same way you've been playing, and keep running your offense. Sometimes you're going to take shots and miss them, and sometimes guys are going to make tough shots against you. You just got to stick with what your game plan is and trust it," he said.

"And sometimes you might find a way to lose those tough games, but you did it the right way," he added.

Luckily for the Wizards, doing in the "right way" has been paying off pretty well.