Magical Pixels, Wizards vs. Heat: Is this life?

The Washington Wizards beat the defending-champion Miami Heat last night in convincing fashion, building a 34-point lead before holding on for a 114-97 win. The internet noticed.

Share All sharing options for: Magical Pixels, Wizards vs. Heat: Is this life?

You guys, what's going on? Are we safe? Did the Mayans predict the apocalypse 13 months early?

So many epic things happened last night. The Washington Wizards beat the Miami Heat at home, 114-97, and along the way built a 34-point lead before, in #SoWizards fashion, almost losing it, holding on, and surging forward at the end. From Nene's monster block on LeBron James early in the game, to his monster dunk on LeBron late in the game, from John Wall's step-back three in Norris Cole's eye late in the fourth quarter, to Mike dropping a "Brick killed a guy" in his recap, so much epic occurred.

It really was overwhelming, but you all were champs, and stuck it through. In the end, the internet didn't let us down.

9 - Assists recorded by Nene against the Heat, a career high.

9 - Washington's advantage in free throw attempts against Miami. The Wizards made 22-of-26 free throws, while the Heat made 16-of-17.

There were so many...

Is this real life? pic.twitter.com/dQS0xiBaoP

Is this real life? pic.twitter.com/AmeReINgkh

If you're at Verizon Center, please send me photos of anyone in Cowboys and/or Yankees gear

Wizards lead the Heat by 21 points at halftime. Miami has trailed by as many as 34 in 1st half. This is not a typo.

The Wizards outscored the Heat 43-18 in the first quarter, and stretched their lead to 34 in the second quarter. Then, in the most predictable development in world history, the Heat went on a run of their own, and #WizardsTwitter went all Negative Nancy.

We're gonna give up a 34 point lead, I just know it

The setup for the most heart-rending collapse in the second half, probably. RT @GMers1: @[me] WHAT IS HAPPENING

This is the scariest 21-point lead of all-time #Wizards

Wiz are up 21 at half, and I'm still nervous

Any one feel like this is a set up

No team with a 21 point lead has looked so vulnerable.

An absolutely guaranteed loser... We ALL KNOW IT too

In honor of @adammcginnis, i'm going to say that the Wizards lead would not have dwindled if Jordan Crawford was still on the squad

About to walk out of Verizon

What if...the Heat(s) purposely tried to get down by 30+, just to make a miraculous comeback?

But then something glorious happened. Just as the Heat had dwindled its deficit down to nine, and appeared poised to retake the lead altogether...the Wizards held on. Not only that, but they outscored Miami in the fourth quarter, 28-20, and claimed their biggest win of the season, and maybe in several seasons. #WizardsTwitter rejoiced.

Chris Bosh acting like the referee just called the first ever personal foul in the history of basketball. #Wizards pic.twitter.com/2RMb3Qy349

Wiz holding on. Past Wiz would have blown this. Let’s see if this Wiz group has Wizzen’d up. #Pradanalysis

Man, #WizardsTwitter can't handle large leads vs Heat, the playoffs might kills us all with anxiety attacks

Wall step back in your face #hawtness #wizards https://t.co/MtyIBPfZ9K

Seriously, the Wizards beating the Heat gets me steamed up. Pants on the roof steamed up.

Tough break for all the duke fans there tonight. Have a safe trip home. News & traffic turn to All News 99.1 FM.

Oh man, it doesn't get much better than that. 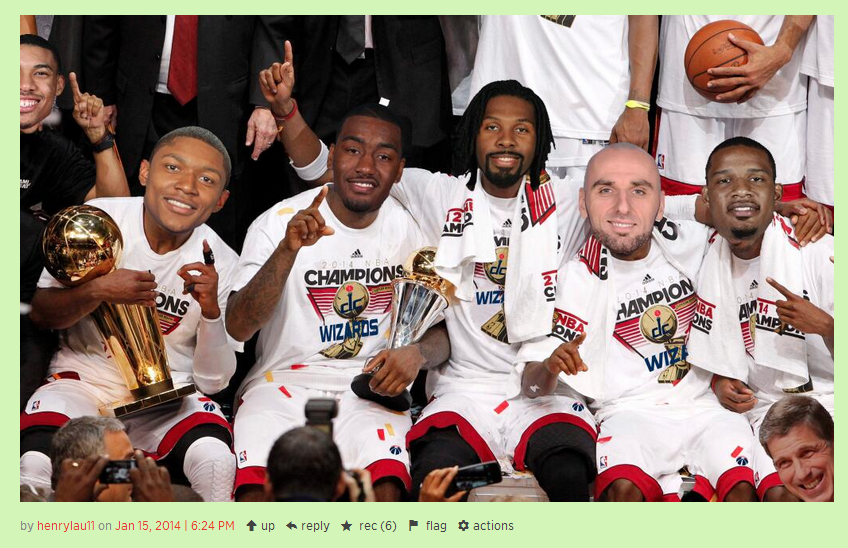