Path to the Playoffs: The Wizards and the Celtics

A strong push in second half of the 2012/13 season has the healthy Wizards eyeing as high as the No. 5 seed. Path to the Playoffs kicks off this week with a look at the Boston Celtics, a team the Wizards should be able to pass.

Share All sharing options for: Path to the Playoffs: The Wizards and the Celtics

Boston Celtics fans are in hell right now. Paul Pierce and Kevin Garnett have been shipped off to Brooklyn in a fire sale that was over before casual fans realized it was upon them. Boston hasn't been in a rebuilding situation like this since Celtics GM Danny Ainge showed up, and now he has to work his magic again.

Still, if we're talking about Ainge's last recipe for success ... a high lottery pick was a crucial component in acquiring Ray Allen. (A lottery pick in Jeff Green they now have back.) Contrary to popular belief, Rajon Rondo doesn't have to be traded should Ainge look to re-establish a new Big 3 right away. And if the Celtics trade a raft of other assets for a dissatisfied star big man out west (LaMarcus Aldridge), my annoyance level will escalate dangerously.

But all that's in the future, and this season's forecast for Boston isn't particularly sunny.

Rondo isn't guaranteed to return right away, but if he does and works his magic? Well, it still probably isn't a team that can reach the No. 8 seed. Avery Bradley leads the best of the rest in the backcourt, and while he's growing into a very nice complementary option, he isn't the kind of primary offensive threat that has typified a core shooting guard. When Rondo went down, Bradley was pressed into ball-handling duties and struggled. Should he return to 2011-12 form with Rondo back, he'll be an attractive trade piece if Boston isn't willing to commit long-term. Season-wise, that will translate to a player that hits threes and gets points off cuts to the basket; not too dissimilar to what Wizards fans are hoping from Otto Porter.

Depth in the backcourt is a bit muddled. Three-and-D journeyman Courtney Lee headlines this group as the primary backup at shooting guard. I suppose their backup point guard is noted gunner and former Wizard Jordan Crawford, and the C's also have Marshon Brooks at shooting guard courtesy of the Nets trade. Pressing Bradley into ball-handling duties last season won't surprise Washington fans who remember Crawford's forays at the point in D.C. Boston's plenty deep at shooting guard, but new coach Brad Stevens may have to get creative as Rondo ramps back up.

Paul Pierce is out, Gerald Wallace is in. Welp. Wallace had an up-and-down season in Brooklyn and the Celtics likely have little idea of what they're getting. Wallace described his season-ending slump and playoff resurgence as confidence-related and it's tough to guess how he'll respond to whatever the Celtics are going to be this season.

So how about Jeff Green? Green did flash for the Celtics after Rondo went down, but it's his performances once Rondo comes back that's going to hold water.

Brandon Bass is back, but I expect the F/C to spend more time at the 5 this season. Kris Humphries is now on board. Jared Sullinger is the nominal developmental priority and showed signs of growing into a quality NBA power forward if he can stay on the court. Back surgery finished his season and his durability will continue to be a concern going forward. Donte' Green and his non-guaranteed contract is still on the rolls after being swapped for Fab Melo, but it's likely Boston cuts him to avoid the luxury tax. 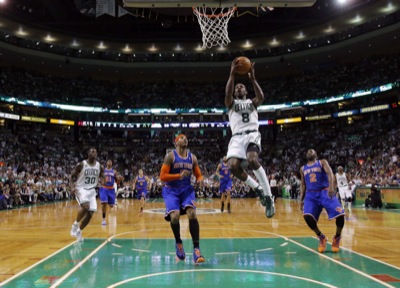 Celtics Blog's writers on what constitutes a successful season.

Expect Bass to log plenty of time at the center position with rookie Kelly Olynyk being the only other center on the roster. That won't do wonders on the glass, though both Humphries and Sullinger are excellent rebounders at their positions. Bass seemed to make strides last season on both sides of the ball filling in for Kevin Garnett, even becoming vocal in the defensive quarterback role. Olynyk, of course, put up some intriguing numbers in Summer League play and has everything to prove at the NBA level.

This is a squad that could very well challenge for a playoff spot if they come together, but a contender they are not. Thus, I'll wager Danny Ainge is preparing his play. If Bass is effective on the defensive end over the course of the season while remaining consistent as a tertiary jumpshooter in the pick and roll, he'll make a useful piece in a trade package with any other number of assets. Especially on that solid contract.

Why talk about trade packages in a post about a team's playoff chances? Based on Ainge's history, he might throw something together midseason that drastically alters the team's momentum, one way or the other. This makes their fortunes difficult to predict.

But all we can do is proceed based on what we know. I'll take John Wall with a jumpshot over Rajon Rondo all day, though Wall has catching up to do on the defensive end. Bradley Beal versus Avery Bradley would be fun to watch (maybe more even than most Wizards fans would care to admit). Pretty even, here. I'll shade the talent edge to the Wizards, but with Rondo and Bradley being playoff-tested, that edge is dulled. Also, rehabbing all over the damn place.

The C's backcourt depth boasts more certainty, but continuity took a hit with Doc Rivers' departure. In D.C., unless and until Eric Maynor showcases his recovered form, the Wiz are rolling with Garrett Temple's defense and Glen Rice Jr.'s potential. The Celtics are deeper in the backcourt, though the gap is lessened when Martell Webster swings over.

On the perimeter, you have to wonder if Green is ready to take a step towards stardom. He might outmatch any particular Wizard and a confident Wallace would make that SF rotation a headache. That said, the Wizards SF rotation of Webster and Trevor Ariza is capable of causing headaches of their own. This position battle might come down to momentum, but I'm more inclined to turn to fit. Until Green proves he can flourish while Rondo is running the point and Wallace gets in sync in a new city, I have to give the edge to the Wizards here. Otto Porter is a question mark, for now.

Injuries predominate at the power forward position as well. The likelihood of Bass spending significant time at center means a likely rotation of Sullinger and Humphries. Sullinger is returning from surgery for Boston while Nene is trying to get over plantar fasciitis in D.C. Trevor Booker is constantly injured, and Al Harrington played 10 games last season. The Wizards healthiest 'power forwards' may well be Ariza and Chris Singleton. It's hard to give the objective edge to either side, here, but until Sullinger can put most of a solid season together, the Celtics don't have a clear starter at power forward.

Bass' efficient (though paradoxically based on jumpshooting), but limited offensive game gives him the edge on that side of the court, but isn't enough to give him the overall edge on Emeka Okafor. While improving as a vocal defender and effective one-on-one, he doesn't protect the rim the way Okafor does. Nor does he rebound nearly as well. Depth at center can be summed up this way: Kevin Seraphin has shown something in NBA games, while Olynyk is a Summer League hero. Of course, we're dangerously nearing Jan Vesely territory there, so we'll just side with the Wizards on this one and wrap things up.

It may raise an eyebrow or two, but I trust I won't ruffle too many feathers when I suggest the Wizards have a coaching advantage. One of the problems with an NCAA coach coming to the pros is not understanding the limitations of their veterans. Too much trust or not enough means they often end up overwhelmed or frustrated. There's hesitation in crunch time on how to use them, leading to a lack of player confidence. Don Newman has helped make D.C.'s defense elite and Randy Wittman has a better understanding of how best to use a roster designed around John Wall's strengths. I doubt Brad Stevens will be able to use Rajon Rondo to his full potential this season as he learns on the job. In a point guard-driven league, that affects the whole product.

And fit really is the issue. The Wizards went from one of the youngest teams in the league plus Rashard Lewis to Wall, Beal, a bunch of established and effective veterans chosen to augment them and the late-first logjam. The squad hit their rhythm in latter half of last season with players rotating on and off crutches. The Celtics just traded two aging core pieces and a Top 5 coach to start a youth movement under an NCAA transplant.

It's too soon to write them off, but it's hard to see the current iteration of the Celtics pushing a healthy Wizards squad next season.