At Verizon Center for media day, the Wizards indicated health would be the only thing to hold them back.

WASHINGTON -- Before the season begins, it's often easiest to paint the rosy picture, sing the happy tune and imagine the dream scenario. June's battles aren't won in September, but imaginations run wild when there's a zero blinking in the loss column.

For the Washington Wizards, that ideal situation may already be off the table with Emeka Okafor's neck injury, even if the bandwagon still looks pretty full. Speaking with players at Friday's media day, it became clear overcoming the uncertainty surrounding Okafor's absence will be a defining theme to the team's season.

"That's big, that's our anchor," John Wall said of losing the team's starting center. "He did a lot of stuff for us defensively, especially talking, blocking shots and rebounding. And he did a key role playing offense for us, so I think it's a good opportunity for the young guys to step up."

What would the Wizards put on their nickname jerseys? 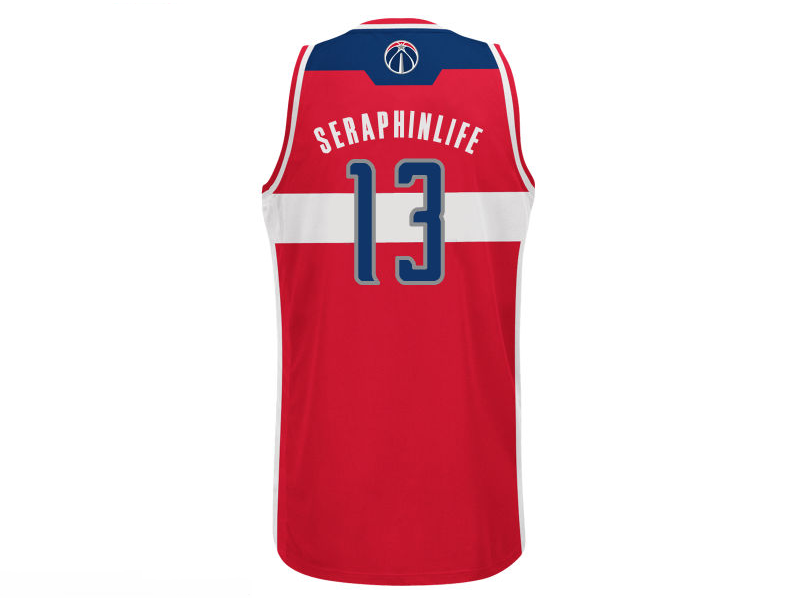 We ask a number of them this question.

Don't be mistaken, the Wizards certainly have confidence. At one point, Wall said the 2013-14 season would be "a waste" if the team avoided major injuries and missed the postseason. But with Okafor already sidelined, the team is one step towards disqualifying from the star's evaluation, leaving the team with a season that would be neither wasted nor worthwhile.

In his fourth year with the team, Kevin Seraphin will be one of the players leaned on most to replace Okafor. That's something he embraced Friday at Verizon Center. "Now, I have to show the coach that I can play, that I can, you know, replace Emeka," Seraphin said. "So now, I have to step up my game."

The 23-year-old specifically mentioned improving his passing, rebounding and defense, with the latter two being especially strong parts of Okafor's game. After failing to really build on his numbers last year, Seraphin said he wasn't really satisfied with his performance, but he'll be given the minutes to show a more diverse skill set early this year.

"I feel like everybody is going to step up and fill in that void 'til [Okafor] gets back," rookie forward Otto Porter Jr. said. "That's one of our biggest weapons on defense and as far as rebounding. I think all our guys is going to step up."

For players like Porter, Trevor Ariza and new addition Al Harrington, the versatility provided by their length could give coach Randy Wittman some different options. "The talent we have, I think that there's no particular 3. Our guys can play multiple positions, which is good for us -- we can play smaller lineups, we can play bigger lineups," Porter said.

Sure, Porter probably shouldn't play power forward until he gets a bit stronger, but let the idea simmer for a while. At the very least, the Wizards know creativity may be one of the best solutions to Okafor's absence.

When the Wizards lost Wall before the 2012-13 season could even begin, it sunk playoff expectations that had been building throughout the summer. Based on the mood at media day, these guys seemed determined to make sure history doesn't repeat itself.

Some other observations from Verizon Center:

Expect more from the Bullets Forever crew on the Wizards' media day soon.