Path to the Playoffs: The Wizards and the Bucks

A strong push in second half of the 2012/13 season has the healthy Wizards eyeing as high as the No. 5 seed, but can they leapfrog teams that finished ahead of them last year? Path to the Playoffs next takes a look at the Milwaukee Bucks.

Share All sharing options for: Path to the Playoffs: The Wizards and the Bucks

When talking about the Milwaukee Bucks, I have to begin with Ersan Ilyasova. If that strikes you as odd, it isn't where I'd think to begin either. Stretch 4s like Ilyasova is a potent complementary weapon for any would-be contender. Their ability to space the floor offensively usually more than makes up for typically substandard defense. At the same time, you don't want to offer Rashard Lewis $118 million. Brew Hoop's Frank Madden recently wondered where Ilyasova's best value lay; on the court or the trade market.

It's a valid question with far-reaching implications. If the Brandon Knight/O.J. Mayo experiment isn't working out and any one of the teams interested in Ilyasova dangles an intriguing backcourt prospect with the Bucks' playoff chances fading? The Bucks may very well shift from win-now to dumping Ilyasova and opting to develop John Henson. It's tough to chart the Milwaukee's fortunes this season, but we'll give it a shot.

We start in the backcourt, which the Bucks completely re-made. Brandon Jennings was looking for a serious payday and the Bucks weren't interested in giving one to anyone not named Larry Sanders. Jennings was bundled off to the Pistons in exchange for Brandon Knight, Khris Middleton and Viacheslav Kravtsov. Hammond rolled out the Brinks truck for O.J. Mayo after a very up and down season in Dallas, Monta Ellis signed elsewhere and that was that. Neither Knight nor Mayo is a proficient distributor. This is a serious problem and the Bucks are going to have a hard time generating the ball movement needed to get Ilyasova the kind of looks that make a stretch 4 effective. Against John Wall and Bradley Beal, the Wizards easily have the edge.

Is it possible to like a team's backup more than their starters? Luke Ridnour, who I like very much as a backup point, is left from last season, and Gary Neal was signed in free agency. I'm interested in seeing how Mayo fares next to Neal and/or Ridnour, and who finishes the year starting at point guard for Milwaukee. Some question marks in Washington's backcourt depth, especially offensively, make depth an easy win for Milwaukee. 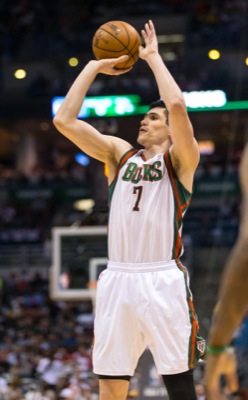 That likely lack of ball movement we talked about a second ago won't be helped by Caron Butler jab-stepping in the halfcourt until the shot clock expires. Greek point SF and first round draft pick Giannis Antetokounmpo is a mystery, but his development would have serious ramifications for a Milwaukee offense that projects as relatively stagnant. Also: Carlos Delfino.

Things get mighty crowded at power forward. Pencil in Ilyasova at power forward next to Larry Sanders at center and you might be looking at a poor man's Rashard Lewis-Dwight Howard. John Henson is behind Ilyasova, and Henson is mighty interesting. Picked 14th in 2012, the two-time ACC Defensive Player of the Year averaged about 13 minutes per game with production that improves with playing time. Henson has flashed a face-up jumper along with some very flashy statlines (see: 17 points, 25 rebounds and 7 blocks against the Magic, for example). I was expecting to see him backing up both Ilyasova and Sanders, but then Hammond gave Zaza Pachulia $15.6 million so, for now, I'll put Henson exclusively at power forward on the assumption that Hammond didn't pay Zaza $5 million per annum to be a third-stringer. Then there's Ekpe Udoh, another defensive stalwart advanced statisticians love who has a hell of a lot of value himself. The Bucks have quite the logjam. The Bucks easily have superior depth compared to the Wizards, and with Nene's injury history (added to the fact that he may start at center), the starting edge goes to Milwaukee.

At center, you've got freshly inked Larry Sanders, defensive monster. Hammond brought in Pachulia, as noted above. Henson will grab minutes at center. This is another solid rotation and would have earned the nod at center before Emeka Okafor's disastrous injury. Even with the possibility of Nene starting at center ...yeah.

The big problem with Milwaukee is that they have no idea who's going to drive on offense. Knight is excellent cutting off the ball, getting more comfortable with shooting from behind the arc, plays excellent defense and has real athleticism ... too bad he's not a shooting guard. O.J. likes having the ball in his hands and has been used to it in the past, but there's going to be plenty of pressure on head coach Larry Drew to figure out the backcourt after missing out on restricted free agent Jeff Teague. Caron Butler is going to have a bigger role than the Bucks can survive if they're going to return to playoffs.

Okafor's injury is a crushing blow to the Wizards chances this season, but an irrepressible homer isn't writing them off just yet. The road just a got a lot harder and there is a LOT of uncertainty now when weighting the chances of these two teams. That said, I'm going to cheat and call this a push for now. Until Milwaukee can figure out their offense and Washington shows they can retain elite status on defense, I can't give the nod to either team.