John Wall made significant strides as a shooter last year, but how can he replicate that success for a full 82-game season?

We've discussed almost every roadblocks that stands in the way of the Washington Wizards and the playoffs this summer. Avoiding the injury bug remains the biggest, but maintaining their strong defensive efforts from a year ago as well as avoiding a regression year from Emeka Okafor, Martell Webster or Trevor Ariza would go a long way toward a successful season.

One thing could trump all should things go off course: an All-Star season from John Wall.

Washington has banked on Wall being a star. In order for him to fulfill that void and live up to his max contract, he must build on his strong finish to the 2012-13 season. Doing that means coming close to sustaining his improved outside shooting.

But how practical is it to ask him to replicate the numbers he put up after the All-Star break for an entire 82-game season?

Wall's form looks decent enough. He releases at the apex of his jump and holds his follow through on nearly every play. But the most troubling aspect, and probably the cause for his early-season struggles, was his shot selection. He constantly shot over outstretched hands and seldom gained enough separation from his defender to get off a clean look. 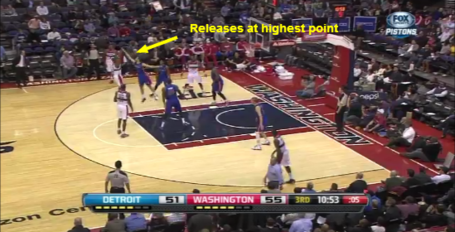 He's forced to bail out the offense late in the shot clock here, but it's encouraging seeing him stay consistent with his form and not rush the shot. 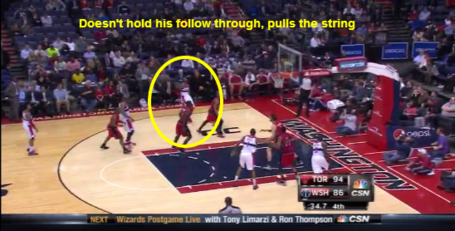 Here's one of the rare instances where he does pull the string on his jumper. The game is already out of reach and John is just looking for a quick score.

Wall shot 336 mid-range jumpers last season, which accounted for 45 percent of his field-goal attempts, per NBA.com. That's up from his first two years in the league, even though he played over 1,000 fewer minutes than his rookie year and nearly 800 fewer minutes than his sophomore year. Making defenses pay for playing soft on the pick and roll while maximizing his scoring opportunities at the basket is the next step in his evolution as a shooter. He has to find that balance and continue to search for ways to increase his efficiency.

In April of last season, Wall's efficiency began to dip as he shot 19 attempts per game, by far the largest of his career. Of those 19 shots, I counted nearly 13 jump shots per game, an outrageous figure given his speed and athleticism. 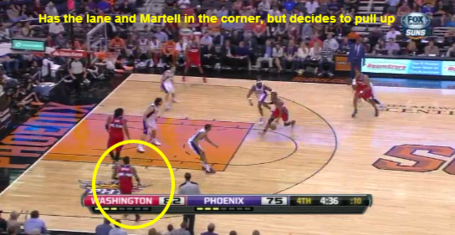 This isn't a terrible attempt, but Wall could have gotten a lot more out of this possession than a foul-line jumper. He gets the high screen from Jason Collins and has Jermaine O'Neal trailing him. Wes Johnson hasn't committed to Wall yet and is still in position to make the closeout on Webster should he receive the pass, but had Wall driven into the lane, he would've either been fouled, found Nene on a dump-off pass or drawn Johnson in, leaving Webster open. Instead, he settles and just misses the shot.

(It's worth noting that many of Wall's best teammates were injured in April, so driving lanes may have been less available).

That is the $80 million dollar question. It's unlikely that he'll revert back to the bad habits that doomed him in his first two-and-a-half years in the league, but it's also a stretch asking him to shoot 48 percent from the field and 46 percent from three (albeit on limited attempts) for an entire year.

It'll be on the coaching staff to put him in easier positions to score, and with the help of a better supporting cast, we shouldn't be seeing Wall initiating the offense as much. This will allow Wall to pick and choose his shots and let them grow organically within the flow of the offense rather than forcing him to bail out possessions with shots he shouldn't be taking.

As teams continue to adjust to his refined skill set, it will be on Wall to combat whatever new defensive schemes he sees and react to it aptly. Defenders will still go under screens due to his speed, but he'll no longer see the help defender sagging back in the lane each time he turns the corner on the pick. Learning to beat the trap, keeping the dribble alive and making the correct read will all become crucial to his long-term development.

As he continues to mature as a shooter and learns to use the threat of his jumper to create more scoring opportunities at the basket, we'll start to see his game open up even further.

The one thing that's so impressive about the top point guards in the league today is their seemingly unlimited use of fakes, crossovers and subtle movements that get their defenders off-balanced and in poor positions to recover. Tony Parker, Mike Conley and Chris Paul have mastered the art, but they wouldn't nearly be as effective without the threat of their jump shot. Decent outside shooting gives them more options and makes it easier for them to see the floor better and react to what the defense is showing.  Rather than flying around a pick, or pressing his foot on the gas on a straight-line drive to the basket, Wall, thanks in part to improved outside shooting, is grasping the concept of changing speeds.

Look at the hesitation dribble he uses here.

We didn't see stuff like that from Wall in his first two seasons.

Rebuilding Wall's jump shot was always going to take time. The work he's put in with trainer Rob McClanaghan the past few years paid off last season and will continue to do so for years to come.

The strides he made goes to show just how much Wall has fine-tuned his jump shot since his rookie season. All of the bad habits -- pulling the string, shooting on his way down, fading back rather than jumping straight up and down -- showed up less frequently as the season went on. When shot selection becomes a bigger issue than shooting form, you know there's been a breakthrough.

This will be something worth keeping track of next season as Wall continues to gain confidence in his jumper out of the pick and roll.