Path to the Playoffs: The Wizards and the Raptors

A strong push in second half of the 2012/13 season has the healthy Wizards eyeing as high as the No. 5 seed, but can they leapfrog teams that finished ahead of them last year? Path to the Playoffs next takes a look at the Toronto Raptors.

Share All sharing options for: Path to the Playoffs: The Wizards and the Raptors

It’s getting there but we might have to let this thing sit, let it ride and see what you have. I think whichever direction we go, it will come to us.

If it wasn't Masai Ujiri saying that, I might consider it a non-statement. That he said it after getting "fleeced" for Andrea Bargnani (yes, Carmelo Anthony's take) gives me real hope for the Toronto Raptors and their future. I don't like any team floundering for long, and the Raptors may finally shake their organizational fugue.

"'Sober" describes Ujiri's message about immediate expectations for the Raptors, and it isn't hard to see why. The Raptors have interesting assets moving forward. Jonas Valanciunas has flashed impressive potential and looks like a star in the making. Kyle Lowry is a very competent scoring point guard on an expiring deal and Amir Johnson's contract provides some of the best value in the NBA. There isn't as much upside or contender-ness looking at the current roster as there are possibilities. But going looking for a deal is the surest way to depreciate your trade assets, and we're all quietly be surprised when Ujiri gets good value out of flipping Rudy Gay.

But until then, it's not easy to see how this team cracks the top 8 in the East.

Who is the Raptors' rival? 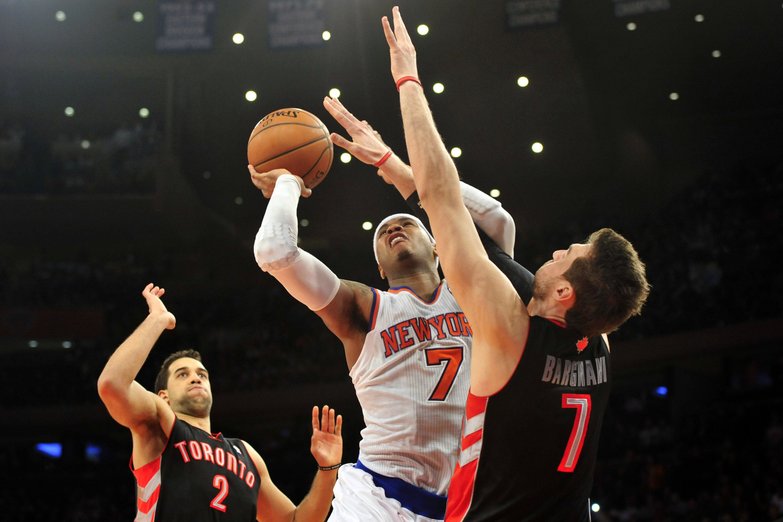 Raptors HQ looks for one

Say what you want about Jose Calderon's defense, but this squad saw an unpleasant dip in three-point percentage with his departure, and none of Toronto's backcourt looks ready to provide the offensive spacing their above average frontcourt will need to operate. Lowry is often hurt and not the set-up man a squad with Gay and DeMar DeRozan needs to be successful in the postseason, never mind making it that far. UNLESS D.J. AUGUSTIN. Advantage: Washington.

Neither DeRozan or Terrence Ross is a core piece at shooting guard, and together they form a shaky rotation looking up at league average. Landry Fields might find minutes there or at small forward, scrapping for time behind Gay with Steve Novak. Linas Kleiza was amnestied, as well. The 2 and 3 should come out as a plus defensively, but they'll struggle to score efficiently without a playmaker running the show.

The Wizards have an efficient distributor in John Wall which improves their efficacy at the 2 and 3 spots. Of course, I'll take Bradley Beal now and later over DeRozan. Ross is interesting, but I'm just as comfortable rolling with Garrett Temple and Glen Rice Jr. behind Beal Parmesan. (I will never let that nickname completely die.)

When Ujiri talks about "seeing what you have" it's pretty clear what kind of squad the Raptors are not.

I'll take Martell Webster starting at small forward for the Wizards over Gay starting for the Raptors. Gay is more talented, but has also recently been an inefficient chucker without an excellent passer getting him good looks. Indeed, that was part of the rationale many Wizards fans espoused when entertaining the idea of bringing him to play with Wall. Fit matters and Webster is the right player for D.C.'s playoff-constructed roster. When Ujiri talks about "seeing what you have," it's pretty clear what kind of squad the Raptors are not. At this point, I'm not willing to concede that the 3 is anything more than a push based on fit and efficiency. (And could probably lean towards Webster/Ariza.)

Those spacing issues mentioned earlier exacerbate the ones that already exist in the front-court. Johnson can shoot a bit, but does his best work around the rim. He's disciplined with his shot selection and is a smart help defender. He doesn't have Nene's passing ability, but he forms an excellent one-two punch with Valanciunas at the 5. He also played 600 more minutes than Nene in 2012/13, though the minutes restriction is supposedly off for Nene this year. Take that for what it's worth.

I expect Steve Novak, Austin Daye AND Tyler Hansbrough to fight for backup minutes in a crowded Raptors frontcourt. Novak and Daye can both play small forward, and you can expect a lively training camp because as things stand now, there are going to be a lot of DNP-CDs racked up in Toronto. Until a player can clearly establish themselves as Johnson's backup, I'm calling power forward depth a push.

You might think head coach Dwayne Casey would craft a number of small/big lineups, going 11 or 12 deep with so many veterans on the roster. If he does, it won't be for lack of depth at the 5. Valanciunas should start this season with incumbent backup Aaron Gray playing behind him. Valanciunas has issues on defense at this young stage of his career, but should be aided by playing next to Johnson.

Meanwhile, Okafor has unproven youth behind him, and while I love what Oak brings defensively, I'm hardly alone in anticipating a big step forward from the third year center out of Lithuania. (Hard to believe Jan Vesely went one pick later ... informal poll: think the Wiz would have passed on Valanciunas to pick Jan a la Otto Porter/Nerlens Noel?) Toronto's depth at the position is certainly superior. Vesely may have had a decent showing at Eurobasket, but we all remember Yi Jianlian beasting for China the year he came to D.C. I think Oak is the better player for now, but expecting Jonny V to show serious growth this season. With Toronto's seasoned backups, I give the advantage to the Raptors.

The Raptors could radically overhaul their roster this year ... or they may not. Fit's the thing, and I expect Ujiri to take what the market gives. He won't go begging. Trades are possible, but not especially likely. Even Bryan Colangelo reportedly turned down James Harden for Valanciunas, and I don't expect anything to change under Ujiri. There may be some relatively minor trades, but for now I'll assume Gay and Valanciunas stay put.

The Raptors have more talent on the roster than the Celtics this season, but no Rajon Rondo to tie it all together. The defense regressed last season and Casey has a lot of work to do in tying in new personnel. The ironic thing about not having a pass-first point guard to set up their wings is the Raptors will need Lowry to score.

He will. It's tough to see the Raptors cracking the top eight in the Eastern Conference, but it's not impossible. What I don't see is them doing it at the expense of the Wizards.