The big man anchored the Wizards into a top five defense in the NBA last season. What does he have to do in order for Washington to secure a playoff berth in 2014?

The addition of Emeka Okafor has been examined extensively in this community, so I won't bother you with the finer details. He had a bounce-back year in 2012 in several ways following a disappointing third season for the then New Orleans Hornets after suffering a knee injury that caused him to sit out the final 39 games of the regular season. Okafor has since garnered a reputation for being injury prone despite missing just 10 games from 2007-2011.

We know what Okafor is at this point in his career. He's an elite rebounder that anchored a top five defense this past season, and is a stabilizing force in the locker room. He's also a below average shooter coerced into a scheme that calls for him to do exactly that: shoot. Maybe it's time to absolve Emeka from his most fatal flaw before we begin to see his numbers plummet even further.

There's a multitude of reasons you can point at in order to explain Washington's struggles on the offensive end, but look no further than the perplexing role Okafor was forced into. After flourishing for much of his career as one of the league's top offensive rebounders, the coaching staff unequivocally took Okafor out of the paint and involved him in more pick and pop situations. Over 21 percent of his offense came via the pick and roll per MySynergySports.com, which in comparison with his most efficient season as a professional in 2010, is up from just 13.9 percent.

Defenses repeatedly left him open off of these picks in exchange for plugging up any driving lanes for John Wall. They would run Wall's man over the screen and have Okafor's defender waiting in the lane to trap him.This left Okafor open, and it was bombs away from there. He shot just 34 percent from 15-19 feet and 37 percent from 10-14 feet, per NBA.com's stats page. Not only were these wildly inefficient shots to take, but Okafor couldn't amend the situation with clever passing or a floor game to speak of.

In the still below, Okafor slips and has plenty of room to operate and also has Trevor Ariza in the weakside corner with his man completely out of position. Instead, he takes an out of rhythm jumper. 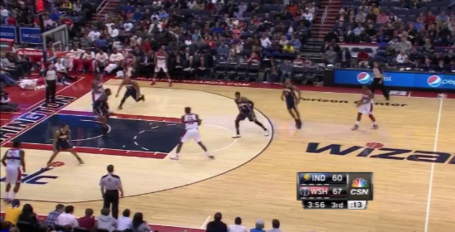 Here, again Okafor receives a well-timed pocket pass from Wall and has a number of options to choose from. He could take a few steps in and shoot, he could get further into the lane in order to suck in the defense and hit Nene with a dump off pass, or he could swing it to Martell Webster in the strong side corner for an open three. Instead, he immediately rises up for a jumper. 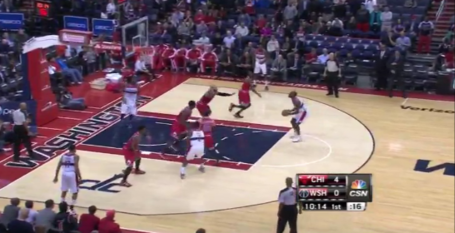 This past season, Okafor's true shooting percentage was down to a wretched 49 percent, his lowest since his sophomore season. The Hornets featured Okafor's strengths by utilizing his bulky frame in the paint more often (31 percent of his offense), and his high IQ to work as an off-ball cutter, particularly along the baseline (22 percent of his offense). His pick and roll opportunities came few and far between with just 14% of his offense coming from that play.

But dig even further into the numbers, and you begin to see that Nene played the role Okafor would have traditionally played. Almost 40 percent of Nene's offense came on post-ups, and a more respectable 16 percent came off pick and rolls. Had their roles been reversed from the get-go, suddenly those pick and pops wouldn't exclusively result in shots clanking off the rim. You would see more drives to the basket or the ball swinging to the corner, ameliorating the need for a pure stretch 4.

Giving Okafor a new role in the offense would do wonders for him moving forward. Maximizing his ability to finish at the rim (70% last season per hoopdata) and control the glass should be a top priority for this team in training camp.