Trevor Booker fell out of the rotation with his less-than-stellar play for the Wizards in 2012-13. Here's how he can improve and emerge as a heady spark plug off the bench in year four.

With the Wizards roster and coaching staff in flux, Trevor Booker was afforded ample playing time to prove his worth as a sophomore in a rather barren frontcourt in 2011-12. But in year three, not only were there more talented bigs brought in to supplant Booker in the rotation, but his game regressed to the point where he became the poster boy for Randy Wittman's doghouse. His numbers were down across the board, and to top it off, a right knee injury forced him to sit out nearly two months of the season.

Among the forward flotsam, it often seems like Booker is the forgotten one. With Jan Vesely, we express disappointment, and with Kevin Seraphin, we express hope. But Trevor's name is brought up solely as a throw-in to the various trades we like to propose during the downtimes of the NBA offseason. There's one way that Booker can emerge from the forward flotsam and make a name for himself as a fixture of our second unit.

The Wizards gave up over 108 points per 100 possessions with Booker on the court and more than five points less with him off the court. It's staggering that he's so far behind defensively, as he does possess the build and physical attributes to show well on the pick and roll. He's quick enough on his feet to hedge and recover or switch onto smaller guards, and he's bulky enough to defend bigger players in the post despite his height.

But the execution is just not there. He's caught ball watching and has a tendency to float into no man's land when attempting to hedge on the ball handler. And he's frequently out of position and has no understanding of when to rotate over for help defense.

We'll take a look at a play in the fourth quarter of a game against Charlotte. Here's the play in real time:

Let's break this down further. Here, Ben Gordon is set to take a pick set by Byron Mullens above the break. Booker is dashing to show early in order to impede Gordon and blow up the play. 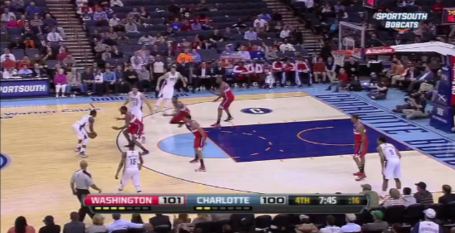 Generally you would want to keep the pick and rolls to the sideline where it's easier to trap the ball handler and block off any outlet passes. However, Booker doesn't set a wide enough base, and Gordon is able to go right around him. Not only does he fail to re-route Gordon, his overaggressive attack gets him so far off Mullens that he's in no position to recover in time. 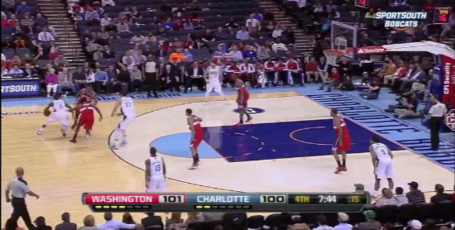 Meanwhile, knowing he has no one around him, Mullens slips the pick and has a free lane to the basket. 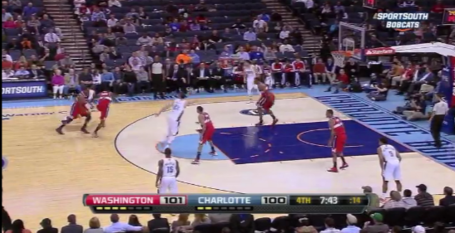 Gordon hits his roll man in stride and Mullens get fouled at the rim. Booker is just now making his recovery, but it's far too late and he's placed his teammates in a horrible position to get a stop.

Booker may never develop into a defensive stalwart, but getting into the film room and rectifying these mistakes should be his top priority as he prepares for training camp. Developing some sort of identity on this team is a must, and as much as we'd like for him to be resolve our stretch 4 issues, he'll never see playing time if the drop off on defense with him on the court is this bad. He's a perfect candidate to emanate into a high-energy big off the bench that crashes the glass and plays defense, which would go a long way into prolonging his career in Washington.

What do you think Trevor Booker needs to work on most to improve next season?