Chris Singleton was touted as a lockdown defender coming out of the draft. What does he have to do in training camp to live up to that potential?

To say Chris Singleton's career is off to a rocky start is putting it lightly. After receiving an overwhelming amount of praise from the fanbase as well as fellow draft experts when he fell to the Wizards in 2011, Singleton has struggled.

With the wing position running barren in Washington, Singleton was placed into the starting lineup in what was essentially a trial and error experiment by the coaching staff in his first season. Unfortunately for Chris, much of what he was lauded for out of the draft took a backseat to his wretched play on offense. His shaky ball handling limited him to inefficient long two-pointers, and in the rare instances in which he was able to put the ball on the floor and drive to the basket, he got bumped and was forced into awkward looking shots in the paint. (Take note, Otto). But he got the benefit of the doubt, seeing as he was a rookie in a lockout year.

But since then, what has changed? The front office brought in three new wings since his rookie year, which made Singleton the odd man out, forcing him to change positions. Theoretically, this should have alleviated the concerns over his poor ball handling and allowed him to focus on his upper body strength. It didn't really happen, though.

Let's get this out of the way first: Chris Singleton is not a bad defender. He hasn't lived up to several people's assessments as the best lock-down defender of his draft class, but he hasn't been placed in the best position to succeed. At times his play is infuriating, and he struggles mightily against bulkier wings a la Carmelo Anthony, but he wasn't afforded any playing time last year to prove his worth. As Amin outlined in his piece when Singleton returned to the rotation, he played in just 30 minutes from December 22 to February 7, with 15 of those minutes coming in a loss against the Pacers.

But who could blame the coaching staff, right? The offense fared better with him off the floor (just slightly), and he clearly hadn't shown enough in practice to earn any additional playing time. However, the numbers aren't all that bad for the former ACC Defensive Player of the Year. He'll never blow you away with a Tony Allen-like display of tenacious defense, but he's quietly done a good job containing pick and roll ball handlers while switching onto smaller guards. The sample sizes are understandably small with him, but he managed to hold players to 3-14 shooting on the NBA's bread and butter play, per MySynergySports.com. On the big men rolling out of the pick and roll? Just 33 percent shooting.

We'd all like to see Singleton improve on offense, at least enough to fulfill the need at stretch-4. Given his history as a streaky jumper, how much of that is practical? In what's become a trend here in these summer checklists (especially among the forward flotsam), finding a role on this team and sticking to it is the top priority. We have all wondered what exactly Chris Singleton is. Now is the year that he must make strides to erase those concerns and get back to what's brought him here.

What's shocked me the most since Singleton entered the league is his lack of basketball IQ. It's surprising because it's also what many pundits raved about him as a senior at Florida State. Playing team defense that prided itself on crisp rotations was a staple of FSU coach Leonard Hamilton's scheme; the Seminoles were one of college basketball's stingiest defenses that season. But Chris has either taken a step back since then or was always more of a product of an elite scheme than individual talent. He's frequently caught ball watching and has a tendency to drift off shooters, even the Kevin Durant's of the world.

Here, Russell Westbrook takes a Nick Collison pick at the top of the key, with Ibaka and Durant stationed at the corners and Kevin Martin at the elbow. 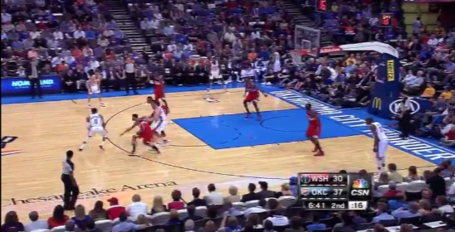 Trevor Booker makes the correct move by leaving Ibaka to dig down and help Kevin Seraphin in case his man breaks free for an easy layup. 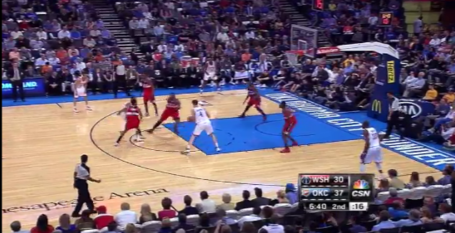 But look how far Singleton has drifted away from Durant. 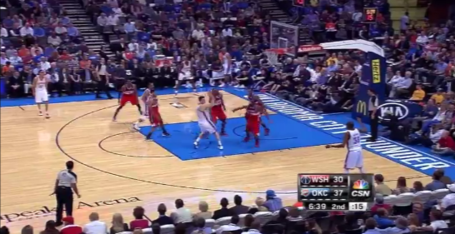 Singleton, finally realizing what's going on, makes his move back to Durant, but Collison is already in the process of kicking it out to the corner. 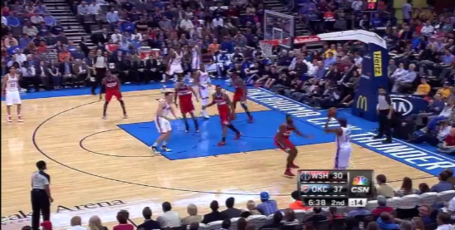 This is an easy catch and shoot for Durant. There was no way Singleton was going to make the close out in time to contest one of the quickest releases in the game.

Here's the play in video form:

This is not going to make or break Singleton's career, but it's the little things like this that drive Randy Wittman crazy. He's defended spot-up situations 37.5 percent of the time he's on the floor per MySynergySports.com, and his opponents are shooting 45 percent from three.

He has to put it all together mentally while understanding his limitations on offense, but carving out a role solely as a defender is doable for the 14th or 15th man on the roster, and it's the only thing that will keep him in the league.