Does the John Wall Effect exist? A look at the Wizards' shot distribution

How were the Wizards such a solid three-point shooting team last year? Is it because of John Wall? More importantly, why were they still such a bad offensive team despite this strength?

Share All sharing options for: Does the John Wall Effect exist? A look at the Wizards' shot distribution

The 2012-13 Washington Wizards did not project to be a very good perimeter shooting team. The 2011-12 Wizards were 28th in the league in three-point shooting, and that was with Nick Young, an excellent marksman if nothing else, there for most of the season. The additions of Emeka Okafor and Trevor Ariza, two non-shooters that were supposed to cramp the team's spacing, threatened to make things even worse. There was a lot of pressure on rookie Bradley Beal to provide John Wall, he of the work-in-progress jump shot, with some semblance of spacing.

You can probably understand why I was freaked out about the Wizards' spacing last summer. In a league where everyone was trying to open up the floor, the Wizards seemed closed-minded about the importance of giving their best player more driving lanes.

But then, a funny thing happened. The Wizards actually were a pretty good perimeter-shooting team for long stretches.

Led by the surprising Martell Webster, an excellent Beal and career-best shooting performances from Ariza and A.J. Price, the Wizards finished 10th in three-point shooting, improving their percentage from 32 percent in 2011-12 to 36.5 percent last season. Better yet, in the 49 games that Wall played, the Wizards drained just under 40 percent of their attempts from long distance, a mark that would have been second in the league to Golden State if maintained over the entire season.

Nobody could have seen that coming. The Wizards were only supposed to employ two credible three-point threats: Beal, a rookie, and Webster, a major unknown coming off his injuries.

Can Beal be a star? 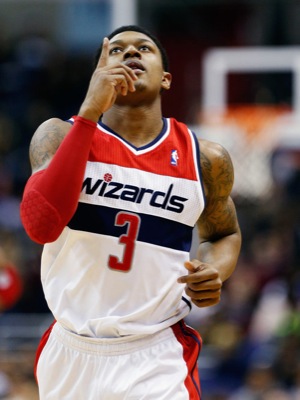 How, then, were the Wizards able to shoot so well from beyond the arc? Was it the rumored "John Wall Effect," which essentially credits the Wizards' point guard for lifting the three-point percentages of his subpar teammates? More importantly, have the Wizards really solved their spacing woes, or is there more work still to be done?

Usually, this is because a corner three comes after a team runs a great offensive set. Yes, corner three-pointers are efficient shots, but you don't generally see teams diagraming their offense specifically to create them. There are some exceptions, like the play the Wizards occasionally run that I diagrammed here or the Spurs' Spurs Baseline Hammer set, but these are incredibly difficult to execute. You can't run a pick and roll to the corner because the defense can use the sideline as an extra defender. The corner is like stepping in quicksand to take a shortcut through the woods. Jump in and out, and you are walking the path of least resistance to your destination. Stay too long, though, and you sink.

The reality is that looks from the corner are reactive, not proactive. Corner threes are generally wide-open shots because they come from great ball movement that was spurred by a team's set. If Wall and Nene run a pick and roll, the domino effect of the play, if executed properly, will often lead to a corner three by Webster or Beal. The play wasn't to specifically get them the ball; it was to run the pick and roll and see what opening resulted.

Given all that, the Wizards' corner three proficiency is encouraging. It means they are doing something right offensively.

Shooting from their sweet spots 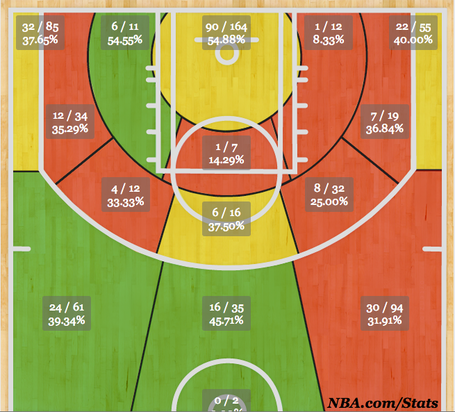 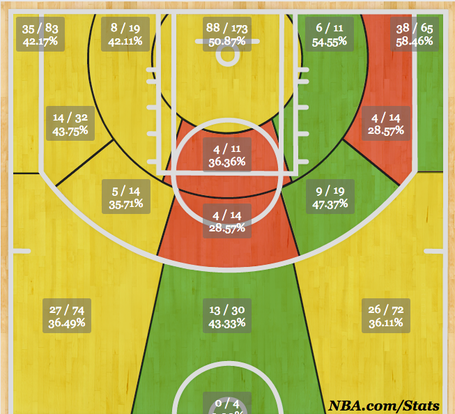 Here's Trevor Ariza's shot chart from 2010-11, when he played with Chris Paul. 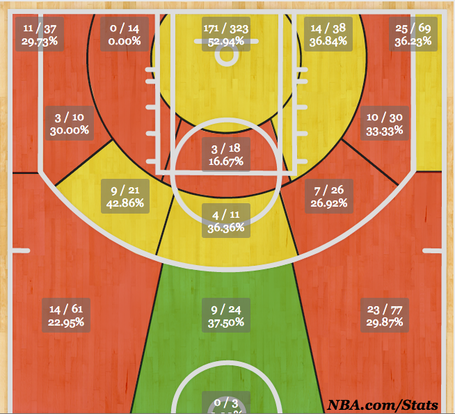 And here's his shot chart from last season. 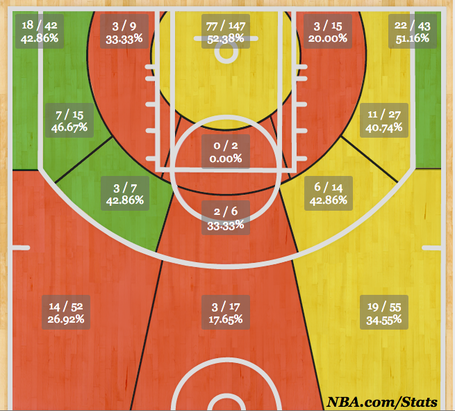 Those are two obvious case studies that show how Wall lifts the corner three-point percentage of his teammates. There's definitely something here.

This is another area where Wall helps lift his teammates. Webster shot 31-59 (52.5 percent) on transition threes last year; he was 18-43 (41.9 percent) in his last healthy year in Portland in 2009-10. On the flip side, Nick Young shot just under 43 percent (46-107) on transition threes while playing with Wall in Washington and just 18-60 (30 percent) since being traded. The sample sizes are small, but it's clear that wings will get more open looks playing with Wall if they're willing to run, which, in turn, will inflate their own and the team's three-point percentages.

That's all great! So why were the Wizards so bad offensively?

This is a really good question. Traditionally, teams that shoot a lot of corner threes and shoot them well are really good offensive teams. They run great offense, they have great shooters and they have star-level threats that put pressure on the defense, forcing them to pick their poison.

The Wizards had all that last year when Wall was healthy. They prioritized ball movement, they had proficient shooters and they had Wall, a star-level threat that put pressure on the defense with his dribble penetration. And yet, they were still dead last in the league in points scored per 100 possessions and just 24th in the league in the 49-game stretch that Wall played.

But the Wizards also were a mediocre shooting team (17th in effective field goal percentage) despite their proficiency from one of the most efficient spots on the floor. How does this happen?

I don't think this is a coincidence. Wall and the Wizards make sure to emphasize creating looks from the corner, but much of that is mitigated by their dreadful performance from above the break. Teams will work to take away corner looks, so improving the team's above-the-break proficiency is paramount.

This is where the Wall Effect cannot truly turn the Wizards into an elite shooting team. You can elevate a player's corner three-point percentage by running good offense and positioning them properly, but a good above-the-break three-point shooter generally has to be a pretty damn good shooter himself independent of anything his team does to free him. The Wizards lack that elite Stretch 4 like Ryan Anderson and Ersan Ilyasova, and this is how that absence is felt the most. Hopefully Al Harrington has a better-than-expected shooting season from above the break.

The additional effect of no great above-the-break three-point shooters: the Wizards fling up a lot of shots from the least efficient spot on the floor. The Wizards took 2,298 mid-range jumpers last year, according to NBA.com, which was the fourth-most in the NBA. They hit just 37.6 percent of those attempts, good for 23rd in the league. This is despite the ability of Wall to create open looks off the high pick and roll.

That's too many mid-range shots without much payoff, and it dramatically hurts Washington's shooting.

Fewest shots in the restricted area

The other effect? The Wizards don't get good shots at the rim. Look at the chart to the right. The Wizards took nearly a shot fewer per game at the rim that the second-worst team and only covered 59 percent of the attempts they got. Things improved slightly in the 49 games Wall played, but not significantly. The Wizards got 23.6 attempts at the rim in those games, which was good for ... 28th in the league over that stretch.

There are two possible reasons why this happened. One is that this is where the Wizards' lack of spacing hurt the most. It's really hard for any point guard to get a lot of assists at the rim when two big men without much shooting range like Nene and Emeka Okafor clog the paint.

The other possibility? Maybe Wall just isn't that good finding players at the basket. As great as he is kicking out to open shooters, perhaps he gets tunnel vision and fails to create even better looks at the basket. This is something he would have to improve himself.

The only way to test the latter hypothesis is to place Wall in a lineup with three other shooters more consistently, so that the spacing is better. We saw that a little last season, but not for long enough to make a judgment call on Wall's passing ability. We'll have a better idea if Harrington is healthy and playing over 20 minutes a game as a Stretch 4. That'll be an interesting test.

OK, so what does this all mean

On the one hand, it's good that the Wizards are making a priority out of creating open three-point shots from the most efficient spot on the floor. In that sense, they're ahead of the curve with their analytics. They can afford to prioritize other areas when finding wing players in the draft or free agency in the future because the John Wall Effect clearly lifts corner three-point percentages. (Keep this in mind when you consider Otto Porter's future).

On the other hand, it's not enough to just be a proficient corner three-point shooting team. The Wizards' overall shot distribution must improve, and they need to figure out a way to raise that above-the-break three-point percentage to a respectable level, even if that means shooting fewer corner three-pointers. Rather than pat themselves on the back for proficiency in one small area of success, the Wizards need to emphasize getting better everywhere else.