Why Bradley Beal might be the second star Washington needs

The Wizards don't have a sure thing in their shooting guard, but a shot at greatness may be enough.

For the Washington Wizards, it appears this is it. This group of players, or at least the most prominent ones, will determine the immediate future of this franchise. When you think about it, that puts an awful lot on the 20-year-old shoulders of Bradley Beal.

The team may have given fans 80 million reasons this summer to believe John Wall is the face of the franchise, but Beal's importance cannot be understated. He needs to be a special player, much like Wall's proving to be, for the Wizards to seriously contend in the Eastern Conference.

Luckily, there are a number of reasons to believe Beal could be a star. On SB Nation's Top 100 players of 2017, the second-year shooting guard was ranked No. 38, making him a good-not-great player akin to Joe Johnson in his prime. That's probably the most reasonable expectation, but occasionally unreasonable things happen.

If the Wizards are going to win titles, Beal needs to be more. Here are a few reasons why it's possible.

Shooting 41 percent overall isn't going to turn heads, but you can just tell from watching Beal that he's superlative at shooting basketballs. The form, consistency and pure arc of his shot all make it easy to see why people keep comparing him to Ray Allen. It's one of the parallels you think is dumb until you actually watch him scorching nets.

And then there are the numbers. It took Beal a while to find his groove after being asked to handle such a major role from Day 1 with Wall sidelined, but it's difficult to explain how incredible shooting 38.6 percent from three-point range is for a 19-year-old. While shooting is partially a natural skill, Beal's understanding of spacing and how to find open looks separates him from most talented shooters. 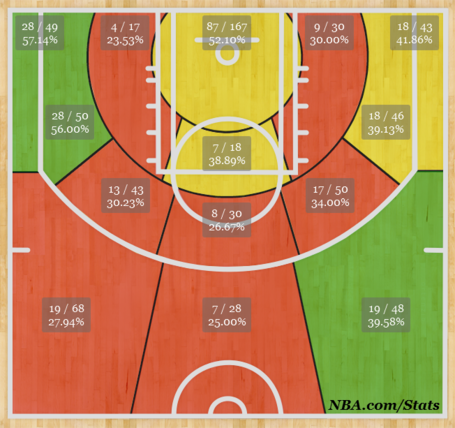 The places where he's supposed to beat you, on the corners and near the rim, his efficiency ranges from proficient to otherworldly. As he focuses more on those shots and settles for fewer midrange jumpers near the key, he'll become a much more potent offensive weapon.

There's good reason to believe he'll make those improvements, too. Here's an example of Beal getting a devastating open look on the fast break:

Ignore Wall's semi-wild jump pass and just focus on Beal, who immediately runs to the corner knowing it's the second-best option should Wall be unable to get an open shot. Pressured at the rim, the ball-handler finds Beal for a wide open jumper that he easily deposits for three points. That's smart play from a teenager. For so many young players, understanding how to work efficiently and within an offense comes slowly, but Beal made leaps and bounds once partnered in the backcourt with Wall.

His biggest problem as a rookie may have been endurance. He shot just 31 percent in the fourth quarter and overtime, but 44 percent in the first 36 minutes. That's something Beal should definitely improve as he gets older, stronger and better understands how to pace himself. Even if he doesn't significantly improve his actual shooting in Year 2, simply maintaining his energy further into games should make him a better player.

More: What Beal must improve next season.

Researching Beal's statistics from 2012-13 proved to be a good deal of fun. Even with the lengthy era of high school players entering the draft, Beal's accomplishments during his first NBA season rival those of practically any other teenage player.

Here's the list of NBA players who averaged more than Beal's 13.9 points per game before turning 20: LeBron James, Kevin Durant, Kobe Bryant, Carmelo Anthony, Kyrie Irving and Stephon Marbury. Getting to the NBA at a young age shows you're good; putting up these kinds of numbers once there shows you could be great.

Beal's teenage efficiency doesn't quite hold up to the same standard beyond his three-point shooting, but that may likely sum up his career: a truly special shooter who plays average to above-average in other key areas of the game. Is that enough to be the second-best player on a title contender? Probably not, but it wouldn't be unreasonable to suggest there's more to Beal.

There's a noticeable, almost cerebral nature to the way Beal plays. He's still learning how to properly work within a team defense, but the way he moves around the court suggests a natural basketball sense. The best athletes display unusual muscle memory and understanding, where "doing the right thing" on the court almost becomes second nature. You can see a little bit of that in Beal, a guy who just gets what needs to be done to help his team win.

After Wall's max contract press conference last month, Randy Wittman spoke about working with Beal to expand his game as a ball-handler and playmaker. After missing a good portion of the offseason recovering from a stress injury, working to run the offense and get his own shots is a key next step, and the seeds of success are sowed even there.

When you talk about Beal taking his game to the next level, from premier shooter to all-around superstar, it's easiest to imagine after watching plays like the buzzer-beater against Oklahoma City:

Again, that's a 19-year-old hitting a wild buzzer-beater to beat one of the best teams in the league. And yet, wouldn't you say Beal looks awfully in control during that entire sequence? It's a great combination of talent, smarts and confidence rolled into one, an artist completely in his element.

He can't legally drink until next offseason

This part of the exercise cannot be stressed enough.

Damian Lillard, Brandon Knight, Dion Waiters, Terrence Ross and Alec Burks are all about two years older than Beal. Ben McLemore and Victor Oladipo, both rookies who haven't played a second yet, are older than Beal. The experience this guy has at 20 years old, from leading Florida to an Elite Eight appearance in his lone college season to stepping into a starting role as an NBA rookie, puts him in unusual territory.

When you talk about the things Beal needs to improve to become a star, almost all of them can be cured with age. It's arguably the most exciting aspect of Beal's game, knowing he has the size, demeanor and talent to be a great player should time be kind. He needs to get stronger and his defense needs work beyond that, but there aren't too many players in this league so evidently talented at such a young age.

For most players, greatness doesn't feel inevitable. Only rarely do you see a player like LeBron James, someone so utterly talented greatness feels like destiny. That's not the kind of player Beal is -- most likely, he'll slot in right where SB Nation ranked him for 2017, one of the top shooting guards in the game but an underwhelming second star.

But there's an inkling of possibility, let's say five percent, that he becomes something great. Maybe even better than Wall. It's the best-case scenario, but this team is determined to put Beal in the best possible position to succeed. All the instruments are there, we'll see what kind of symphony he composes.