What does Al Harrington bring to the Washington Wizards?

The Washington Wizards just signed journeyman combo forward Al Harrington. What does the former member of the Pacers, Hawks, Warriors, Knicks, Nuggets and Magic bring to the table?

Share All sharing options for: What does Al Harrington bring to the Washington Wizards?

On August 11, it became official: the Washington Wizards signed Al Harrington. After spending much of last season on the bench with a torn meniscus and a staph infection, Harrington is apparently in great shape and ready to play a key role on what's looking like a playoff team.

Even if he hadn't missed most of last year with a knee injury, it would be easy to forget Harrington even exists. He's spent most of his career in basketball purgatory -- he started out with the Pacers, went to the Hawks in a trade involving Stephen Jackson, came back to the Pacers, went to the Warriors in another deal centered around Stephen Jackson, spent a few years on the post-Starbury, pre-Amare Knicks, played half a season with the Nuggets before Carmelo Anthony left, stayed with the Nuggets thereafter, then wound up on the Magic as a throw in to the Dwight Howard deal.

But what could he bring to the Wizards?

Harrington has one key skill that's the likely reason Washington even considered signing him: he can step out and hit a three pointer. A career 35 percent shooter from deep, Harrington made 33 percent of his three balls during his last full season in Denver. There are roughly a dozen power forwards in the NBA capable of making three pointers at that rate while taking the shot on a regular basis, according to Hoopdata.com, and that number only goes down when you consider how few of the players listed can capably defend their position when opposing teams aren't going small. It's also worth noting that Harrington was particularly effective from the right corner during his last full season of play, knocking down almost 55 percent of his threes from that spot in 2011. He also made a reasonable percentage of his above the break threes, another skill that will help him when he's trailing the Wizards' youngsters in transition. Considering how often shots from his sweet spots come up when Washington gets out and runs, Harrington should see his three-point percentage rise this season. 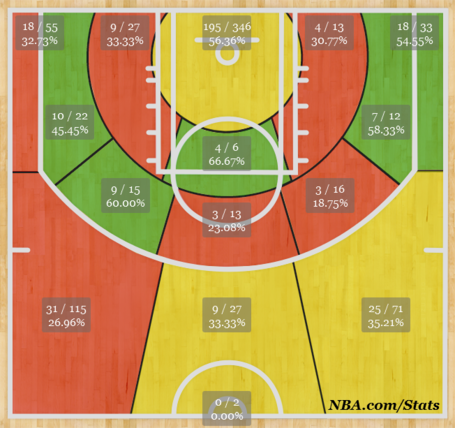 The rest of Harrington's offensive game is pretty unremarkable. He's a middling passer who typically puts up more turnovers than assists, doesn't draw a lot of fouls and is an inefficient scorer inside of the arc. He's been a key part of some bad teams and it's easy to see how those teams struggled to score efficiently with him jacking up bad shots. Fortunately, he should only be the third or fourth option any time he's on the floor, so a reduction in usage and uptick in accuracy should be in the works for him.

Despite his lack of size and reputation as a gunner, Harrington is a surprisingly solid defensive player. No, he doesn't block shots or pick up a lot of steals, but he's strong, knows where to be and moves his feet. Harrington's teams have traditionally been better defensively with him on the court than when he's off of it, while MySynergySports.com rated him the NBA's 57th-best overall defender, 67th-best post up defender, and 16th-best defender against the pick and roll roll man in 2011-12. Those numbers come nowhere close to telling the whole story, but they do tell some of it. While he's not known as a rebounder, his career average of 7.1 total rebounds per 36 minutes won't kill the Wizards as long as he's playing next to a legitimate center.

The only real cause for concern when it comes to Harrington is his age. He'll be 34 in February, an age when most basketball players are either retired or considering it. A decline in his overall production is to be expected, but fortunately for Washington, three-point shooting and knowing where to be on defense are two skills that age well. Even if the bottom falls out and Harrington basically stops scoring inside of the arc and rebounding, he'd still be in line to get minutes ahead of Kevin Seraphin so long as Emeka Okafor and Nene are are healthy.

More likely than not, Harrington's going to be Washington's first big man off the bench. He's going to feast off pick and pop jumpers from John Wall, as well as the above-average passing of Nene, Otto Porter, Bradley Beal and Trevor Ariza. He's played most of his career in small, shooting-centric lineups and should find himself in a similar situation in Washington. Due to the presence of three small forwards who deserve at least some consideration for a starting role, Harrington's going to take most of his minutes from Jan Vesely and Seraphin while more likely than not pushing Chris Singleton out of the active lineup.

Bottom line, this probably means more wins for Washington, even if it's just by getting the team's worst players of the court and replacing them with a league-average third or fourth big man.

Harrington's not going to set the world on fire and a less is more approach to the game from him would be ideal. He'd have been a bad pickup if Washington had signed him to a hefty contract like he received from Denver in 2010, but if he's even 85 percent as good as he's been the last few years, Washington may have gotten a steal. Bigs who can hit a three and play passable defense in the post are a rare commodity.

Now, let's see if he can stay healthy.

Wizards closing in on signing Al Harrington, according to report