Emboldened by his family, a matured John Wall hopes he can be the leader, superstar and free-agent recruiter the Wizards have been waiting for.

WASHINGTON -- With the official announcement Thursday afternoon from Verizon Center, John Wall became a significantly wealthier man and the definitive face of the Washington Wizards. That much is undeniable with an $80 million max contract coming his way.

But during a press conference celebrating his latest, and arguably biggest, leap into the limelight, Wall showed a sort of humility that's made Derrick Rose such an easy figure to like at times. With his family there supporting him as his career goes to places unknown, Wall talked about his maturation as a person, who helped him get there and how it will all make him a better player.

"Just me as a person, you know me as a person, that's just me. I don't think I'd ever let money change me, I told my mom and my family that from day one," the Wizards' confirmed cornerstone said.

Throughout the day, coach Randy Wittman, general manager Ernie Grunfeld and owner Ted Leonsis all emphasized Wall the person as much as Wall the player. While people dig into his three years of performance to make sense of this contract, it's clear the organization felt the greater circumstances necessitated this move.

"Sending the signal that we reward our own, that we'll draft and develop and be able to retain, I think is a very positive message to all of the constituencies we have to serve," Leonsis said. 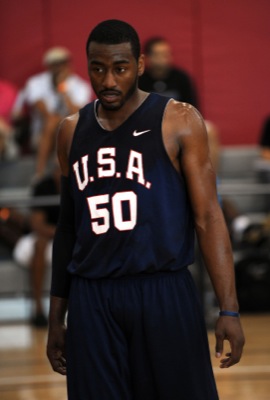 Does Wall deserve the max? It's complicated.

Hoping to make D.C. a legitimate destination for free agents, the Wizards believe Wall's deal is a step towards that trend.

Much of the team's motivation stems from the point guard's off-court maturation since being drafted No. 1 overall in 2010. Even at his young age, Wall has earned the Wizards' faith as a leader, particularly after weathering some hard early years in the NBA under volatile circumstances.

That persistence and ambition to become great made an impression on Wizards brass, but Wall emphasized the credit his family deserves for supporting him through tough times.

In a rare show of emotion for Wall, the supremely-talented man we often forget is just 22 years old teared up while discussing the passing of his father and having to grow up quickly in a one-parent home. With so many family members on hand, it was clear how special the moment was for everyone to see Wall reach this level of success.

But for the team, this move is ultimately all about winning. As mature and good-natured as Wall may be -- he announced he'll be donating $1 million to a number of local charities with the help of the team -- this signing is a gamble on his talent, improving the team and sending a message to the rest of the league.

In not only retaining Wall, but rewarding him as thoroughly as possible with an early maximum extension, the Wizards believe they're building not only a winning team, but a winning environment. While Wall often focused on his family and the support they give, the Wizards seem intent on building a quasi-family of their own.

"We want to have the opportunity to bring in that one transformational key free agent," Leonsis said afterwards. "Well, free agents only want to come to teams that they know are stable, that are making the playoffs and they think they can be additive to get you over that next hump. That they know you're willing to make the investment."

By overhauling the roster and committing big money to players like Wall, Nene and Emeka Okafor, the Wizards believe they're fostering that kind of reputation. Obviously the team still needs to actually win some games, but sentiment isn't meaningless, particularly in a market where teams are limited in offering money to top players.

Okay, don't take that the wrong way. With the Wizards seemingly intent on using this contract to lure other free agents down the road, will Wall actually start recruiting other guys to join forces in the nation's capital? Based on his answer, well, sorta.

"This is a great city, it's very marketable, and I think a lot of people will have to the opportunity to want to come here soon."-John Wall

"I think recruiting is when you gotta fly 10 hours and have 10 dinners with somebody, and then, 'Oh, he don't want to come in anymore'," Wall continued. "I mean, I feel like you gotta do that sometimes, and a lot of people do that, but I feel like I've got good enough relationships with a lot of players in this league and they see I'm improving as a player, how we're trying to change things around here in D.C. and the organization. And this is a great city, it's very marketable, and I think a lot of people will have to the opportunity to want to come here soon."

Wall has said in the past that he's not the type to recruit other players, much like Rose with the Bulls. It goes against the trend in recent years, where players have often seemingly fraternized to team up, but I don't think this necessarily means Wall won't be encouraging other players to join a possible Wizards contender.

He just has his own style, an understated one that emphasizes winning. Wall wants guys to come to D.C. because they want to win, which is precisely the kind of thing management wants to hear when it's committing money to a 22-year-old. Just because he's not flying around the country and having dinner dates doesn't mean he's not helping this team sway player opinion.

It just means he'll let Grunfeld and management do its thing, and he'll do his. As Ernie said, players want to play with guys like John, so maybe the idea is to let the D.C. experience sell itself.

Some other quick notes from Thursday's press conference: