NBA Free Agency 2013: How does Eric Maynor stack up among backup point guards

Share All sharing options for: NBA Free Agency 2013: How does Eric Maynor stack up among backup point guards

Finding a backup point guard to spell John Wall was at the top of a lot of fans' wishlists this summer. By signing Eric Maynor to a two year deal worth about four million dollars. Even though he's recovering from a knee injury and had fallen out of the Oklahoma City Thunder's rotation before being dealt to Portland, Maynor is widely considered to be at the very least a decent backup.

But compared to what?

Having a good backup point guard is such a luxury that many teams have one in name only. For example, the San Antonio Spurs gave most of their point guard minutes that Tony Parker didn't soak up to Nando De Colo and Cory Joseph, yet Manu Ginobli, usually with Gary Neal next to him, was the team's primary playmaker and distributor when Parker went to the bench. While De Colo and Joseph were the backup point guards on paper, in practice the role was filled by a couple of wings with decent ball skills.

A lot of teams functioned in a similar manner. Nonetheless, Maynor will likely be asked to play about as much (13 minutes a game) as De Colo and and other guys who only the most hardcore fans have heard of, so as long as he doesn't embarrass himself every time he steps on the court, Washington should be fine. That said, when you examine what he brings to the table compared to other backups, he doesn't look so good. 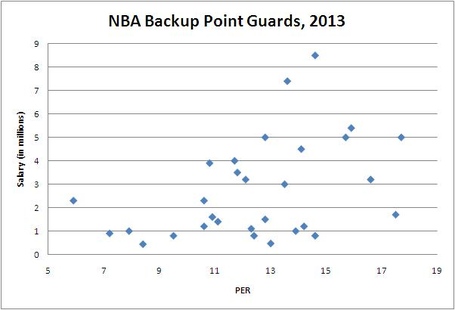 In terms of Player Efficiency Rating, a weighted and pace-adjusted statistic with a league average of 15, Maynor grades out very poorly in comparison to the performance of other backup point guards. The average PER of the backups I culled the above data from was 12.46 last year, while the average salary was $2.7 million. Maynor's PER last year was only 9.3, the fourth worst mark among the the thirty backup point guards I examined. Even if you chalk up last year's sub-par performance to being out of place on the Thunder, a newcomer on the Blazers and at half-speed due to his knee injury, Maynor's career average of 11.0 would place him in the bottom third of last season's backups.

In his defense, Maynor is being brought in to competently run Washington's offense when Wall steps out. Viewed in that light, he becomes a bit more valuable, and the deal he received begins to make a lot more sense. Maynor finished 39th in Pure Point Rating among point guards who played more than ten minutes a game last year, right between Jrue Holiday and Darren Collison. He's not exactly elite, but among backups, he's one of the better offensive orchestrators out there. Assuming he can continue to hit three pointers at a solid clip (35 percent for his career, 38 percent in Portland last season), he should be OK so long as he's able to play with one or more shot creators. While Maynor has repeatedly demonstrated the ability to make the right pass, he lacks the first step and advanced ball-handling abilities to regularly break down a defense off of the dribble.

Defensively, Maynor is something of a mixed bag. Despite his size, Maynor never picked up a lot of steals or rebounds. He's also too slow to check quick guards, something that could be an issue for a team with a 6'4 point guard. Oklahoma City traditionally defended a bit better with Maynor on the court than off of it, but it's debatable how much of this was a result of a half-hearted defensive effort from Russell Westbrook and Oklahoma City's second unit's overall excellent defensive performance. It's worth noting that Portland was 7.5 points worse per 100 possessions with Maynor on the court last season, although he should get a pass due to frequently having to play out of position at shooting guard next to Damian Lillard.

Maynor seems like a below-average backup. Much like the Martell Webster deal, though, there are some mitigating factors that show why he might fit in well in this specific situation. Maynor has his faults and Washington's defense could suffer when faced with quick guards, but there are worse players out there. As long as he can stay healthy and improve on his performance from last year, Maynor should have one of the fairest contracts in the NBA.