Bradley Beal is coming off a solid rookie season where he emerged as an elite three point shooter. How can he build on his success from last year?

Over the next couple weeks, we'll brainstorm a list of skills for each Wizards player to improve for next season. We'll suggest one or two as a jumping-off point, but please add or modify the list in the comments section. Next up: Bradley Beal.

Bradley Beal had a fine rookie year. When he hit his stride in January, he was playing like the rookie of the year -- averaging over 50 percent from three and nearly 45 percent from the field. He's now one of the premier corner three-point shooters in a scheme that allows for him to accentuate that elite skill.

But there's plenty that Beal can work on. Here are two things that jumped out.

BALL HANDLING AND PICK AND ROLL IMPROVEMENT: Coming to camp with an improved handle is paramount to his success next season, and without one, he'll suffer from the same issues that limited his game as a rookie. He shot just 31 percent as a pick and roll ball handler last year, according to MySynergySports.com, and after watching some tape, it's not difficult to see why.

Here, Bradley rejects a pick set by Emeka Okafor and doesn't see Damien Wilkins coming at him on a hard close out.

I have no problem with going the other way off the pick if you're an elite ball handler that can manipulate a defense left and right, but if you lack the advanced dribbles, you're better off taking the pick and surveying your options. Had Beal done so, he may have had Emeka Okafor rolling to the basket, Trevor Ariza camping in the corner and Jan Vesely patrolling the baseline. 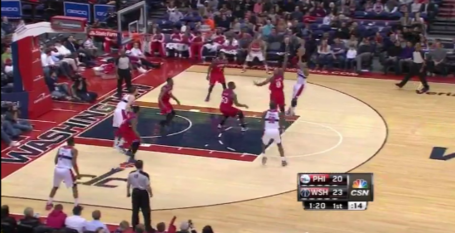 On this play, Beal takes the pick set by Chris Singleton, but immediately rises up for the jumper.

There's three defenders around him in this screenshot. He had the option of swinging it to Ariza or hitting the rolling Singleton if he had probed and maintained his dribble, but instead takes a jumper a foot inside the three-point arc. 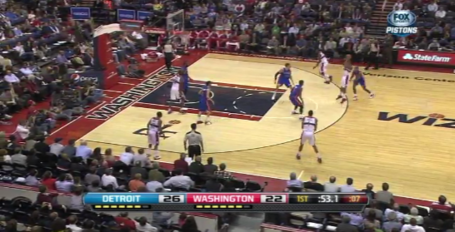 SHOT DISTRIBUTION: In the first two months of the season, Beal shot just 26 percent from three, but after catching fire in the second half of the season, bumped that average up to a respectable 39 percent. But his overall field goal percentage hovered around the 40 percent mark for a good part of the year, which had more to do with his shot distribution than anything else. 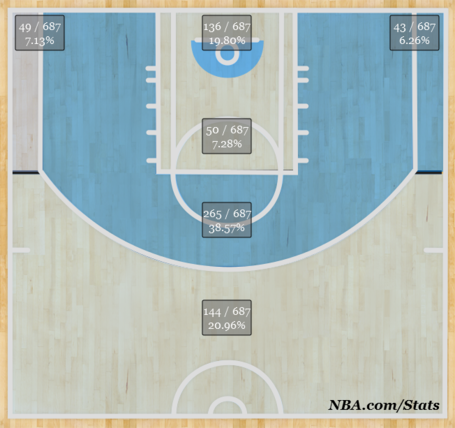 Nearly 39 percent of Beal's shot attempts came from the most inefficient spot on the floor. Had he allocated his shots to more threes and drives to the basket, not only would his field goal percentage increase, but he'd also get to the line more than what he did as a rookie.

He will mature as a scorer and with time, become more comfortable as a ball handler. But shot distribution is something he can rectify immediately.

What do you think Beal needs to work on most to improve next season?