We wanted to get a better feel for what to expect with newest Wizard Eric Maynor. So we went to Blazer's Edge for some help.

Share All sharing options for: NBA free agency 2013: Getting to know Eric Maynor

Eric Maynor spent much of his time after his injury backing up Damian Lillard in Portland last year, so we thought it would be fruitful to pick the brains of our sister (brother?) SB Nation NBA blog Blazer's Edge about the newest addition to the team. And luckily for us, Dave Deckard was more than happy to help out.

Bullets Forever: After acquiring Maynor midway through last season, what kind of impact did he have on the the team?

Blazer's Edge: Maynor's primary contribution to the Blazers was not being incompetent. Before the Maynor trade Portland had suffered with an injured and under-performing Ronnie Price as the primary reserve at point guard. When that didn't work they went with Nolan Smith, who immediately earned the ire of Blazer fans by playing like he'd never worn sneakers before. Maynor could play the position so he looked like an All-Star by comparison.

Though he was acquired to back up Damian Lillard, technically Maynor's greatest value to Portland came playing alongside Portland's Rookie of the Year. As opponents got used to Lillard's style they began to pressure him incessantly. The Blazers had zero other ball-handlers on the roster, leaving Lillard prey to defensive depredations. Maynor bailed out Lillard and the offense, taking the ball when Damian got grilled then delivering it back to him to score on the weak side. (Ed. Note: this is very interesting, and could come in very handy if Maynor plays alongside Wall.)

BF: How would you characterize his defensive capabilities?

BE: Poor. Maynor isn't a defender.

BF: Gotcha. That's good to know. How would you characterize his offensive capabilities? 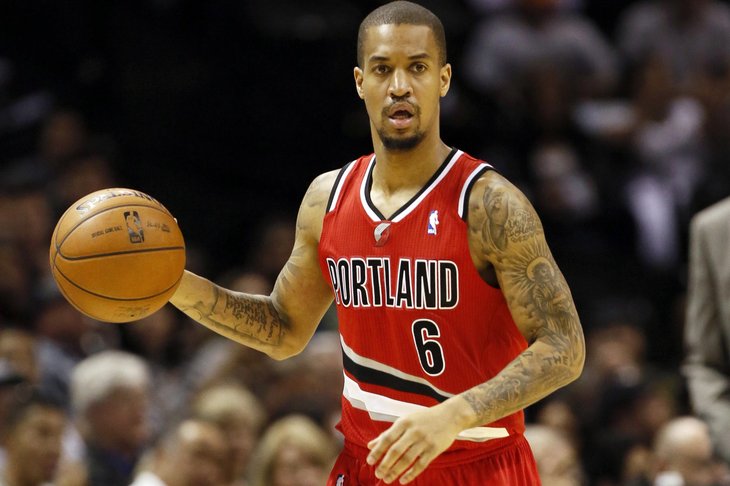 BE: Confidence was his greatest asset in Portland ... much-needed as well. He wasn't afraid to take any shot or make any pass but he still kept a nice assist-to-turnover ratio. His three-point shot looked better in Portland than it has in a while, a nice development. Maynor feels far more at home on the offensive end of the floor than on defense.

BF: Do you feel as though he's fully recovered from his ACL injury?

BE: I didn't get to see him too much before his injury, but last year he looked about as I expected on the floor. He showed no noticeable hitches or hesitations and no fear.

BF: (Phew.) What do you think he can bring to the table over another backup guard like, for example, A.J. Price or Darren Collison?

BE: He brings some offense and some chutzpah at a reasonable price, plus he'll be comfortable with lower minutes as he's still trying to earn his place in the league. Price is more point-guard-ish but less of a scorer. Collison will bridle at becoming a reserve again and will cost much more.

BF: At $2 million per year for 2 years, do you think the Wizards made a good choice to backup John Wall?

BE: If that's what they want from him, sure. If they're hoping for more I guess there's still a chance, but it seems slim. Either way, they'll get everything they paid for.

BF: Will the Blazers miss his contributions?

BE: Likely new draftee C.J. McCollum will be able to do everything Maynor did and more so it's unlikely the Blazers will miss him. But Portland fans saw plenty of value in what Maynor was able to give and appreciated it.

Thanks again to Dave Deckard for helping us out with this piece. Check out more great coverage of the Portland Trail Blazers by Dave and other writers at Blazer's Edge.

• Next up: Garrett Temple.

• Get to know Glen Rice Jr.