There are some relevant discussion points when thinking about John Wall getting a max contract, but there are others that you'll hear that don't mean diddly squat. We consider which is which in this piece.

Share All sharing options for: What we must talk about when we talk about John Wall's max contract

UPDATE: The deal is now done. All thoughts remain the same.

By now, you've probably heard that the Wizards are closing in on giving John Wall a five-year maximum contract extension that would kick in at the start of the 2014-15 season, making him their designated player. This is bound to cause lots of different types of reactions, but in the interest of steering the conversation into a proper context, these are the important considerations we must make.

I don't think this is a relevant comparison. Ultimately, I hate discussions of "worth" in the NBA because this isn't a real market. Two things you have to consider:

1. Can you really evaluate "worth" when there are so many market controls that jack up players' prices? The two most notable ones: the max contract and restricted free agency. I've written about the perils of the max contract before, and the gist of the argument is that, by capping the maximum the absolute best players in the league make, it artificially raises the value of the second-tier players because there's a money vacuum. Teams end up having more cap space to spend on the Brook Lopezes, Roy Hibberts and, yes, John Walls of the world because LeBron James isn't making the $50 million that he should. Thus, it's hard to accurately compare Wall to other max players, because those guys would be making much more than the max if they could.

Regarding restricted free agency, it can either artificially balloon or cool a player's price. It does the former when a team is forced to overpay to have any chance of luring a decent player away from his situation, because otherwise, the current team will match. (See Tyreke Evans, Nicolas Batum). It does the latter when nobody steps up and makes an offer because they don't think it's worth the hassle, allowing the current team to leave a player hanging in the wind. (See Brandon Jennings). In either case, players aren't really getting their "true market value." Batum and Evans are $11+ million players because of a unique circumstance, and Jennings is potentially a one-year contract guy because of a different kind of unique circumstance. Yet so often, you see these players compared to each other, as if the market conditions are the same. It's very misleading.

All that's a setup to the more important point.

2. Top-level talent is scarce. OK, so Wall's not "worth" a max deal. That's a fair point of view. But it's not like you can take the money that would go to Wall and pay for Curry. The rules are so strongly slanted in favor of the home teams that players of Wall's caliber almost never hit the open market ... and if they do for some reason, the home team still has a huge advantage in retaining them. This is especially true for young players because of restricted free agency.

Is Wall worth the max? It's complicated 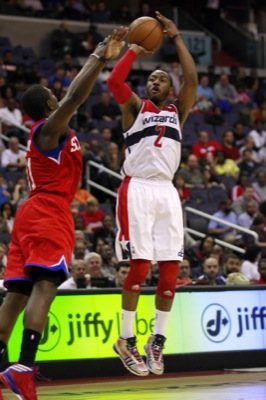 So when someone says "Wall is not worth $16 million because Curry is worth $11 million," it's not an especially relevant point. It's not like the Wizards can go shopping for their own Curry if they decide not to pay Wall the max. This isn't furniture shopping, where there are an abundance of useful options in the same price window. Anyone currently in the league that's on Wall's level won't be available on the open market. The Wizards' choice: either keep Wall ... or beginning a multi-year rebuilding process that hopefully yields a high draft pick sometime in the next half-decade that can be the next Wall.

Salary comparisons make for good Internet fodder and negotiating leverage for eager agents, but when it comes to star-level talent, they are functionally irrelevant.

Damn right. Also, if this deal doesn't get done now, he's gone in a year

OK, well, this isn't really true either. Those wondering why the WIzards are maxing out Wall now have a legitimate point. Worst-case scenario, Wall heads to restricted free agency, where the Wizards can match any offer. No other team can offer more than four years at the maximum salary, so at worst, the Wizards would still get a discount on the five-year offer. There's no real danger of Wall immediately jumping to the Lakers, for example, because of the way restricted free agency works.

It's also worth noting that the Wizards had until October 31 to negotiate this specific extension with Wall, so there still would have been plenty of time to, you know, actually negotiate. I'd feel a little more comfortable about this deal if it was reached on October 31 rather than August 1. Since one major reason to do an early extension is to get a star-level talent in at a discount, I don't understand why the Wizards started at a max-level deal rather than beginning at a lesser value and negotiating up until the deadline.

OK, but what about his feelings? Why risk pissing off the franchise player?

One's answer to this question probably determines how you feel about maxing Wall out now. On the one hand, the cold, hard evidence presented in the previous question is compelling. No player has been so thoroughly pissed off with his organization that he's rejected an early extension, failed to sign an offer sheet and prefers to take the one-year qualifying offer to become an unrestricted free agent the next year just so he can escape a less-than-ideal situation. (Brandon Jennings could become the first this year, for what it's worth). If Wall is sad, the Wizards could have take the adversarial view and told him to put his money where his mouth is.

On the other hand, one could argue there's value in having a happy Wall instead of a somewhat peeved Wall. There have been many studies that suggest that collaborative negotiations tend to yield happier employees and better performance than adversarial ones. (I'd link to one, but they're all in print or scholarly journals that aren't available for public use.) The worry here is that this devolves into the Kevin Love situation if the Wizards act too adversarial in negotiations, whereby Wall signs a new deal eventually, but insists on a third-year opt out so he could flee the premises sooner. In the meantime, he'd publicly criticize the team, as Love has, and his morale would not be at an ideal level, which would affect his performance. All this so the Wizards ... could have avoided paying a $12-13-million player $16 million. Is that worth it?

I'm conflicted on this question, because it's a difficult one to evaluate. I'd love to hear what you guys think in the comments.

So, do you like this deal if it's done?

I'm not sure. I think I'd like this deal more if it was signed on October 31 after some negotiating sessions instead of August 1, as Marc Stein believes. I don't see a compelling reason to rush and get this done right this second where there are still three months left to negotiate, not to mention a whole additional summer with Wall as a restricted free agent. That said, the end result is paying a very good player slightly more than he should be worth in a completely open market, and I never think that's a huge problem.

Wish I could give a stronger take, but I'm having trouble coming up with one.