Jan Vesely had a strong Summer League, but was he really good enough to be a factor on the actual Wizards team next season?

LAS VEGAS -- Given the way he challenged Jan Vesely earlier in the week, Sam Cassell's words following the Wizards' 78-77 win over the New Orleans Pelicans on Friday were very surprising.

"I think he opened up a lot of eyes on our staff," Cassell said. "Our staff understands that, if he plays the way he played the last 4-5 games, he can get some minutes."

I think he opened up a lot of eyes on our staff."-Sam Cassell on Jan Veseyl

Third-year performances in Summer League don't often predict much, but Vesely finally started playing like the guy the Wizards thought they'd get in 2011. He was active on the offensive glass, usually on point with his defensive rotations and even showed the improvements in his jump shot. Averaging 12 points and seven rebounds on 59 percent shooting, he was clearly the Wizards' best player.

But was he good enough to make a difference? That's a trickier question.

The Wizards have a lot of frontcourt bodies, if not a lot of frontcourt quality. Nene and Emeka Okafor are firmly entrenched as the starters, and the Wizards wouldn't have pursued either if they felt good about their young frontcourt options. From there, it's a matter of developing all the young forwards at once. Kevin Seraphin remains a part of the picture, as does Trevor Booker. Even given his uneven Summer League play, Chris Singleton is too.

"It's a logjam at that position in D.C.," Cassell said. "But hey, competition will resolve problems."

(Note: "logjam" isn't the word I'd use, because there isn't a "logjam" of good players, but I get where Cassell was going with that line).

Vesely remains the only one of the bunch with the athleticism to change games. He's potentially the best pick and roll defender, the best passer, the biggest difference-maker. Whereas Singleton is still trying to find himself, Seraphin is still trying to get in shape and Booker is constantly hurt, Vesely has the potential to give the Wizards unique qualities.

The problem, of course, is twofold: strength and confidence. The Wizards played Vesely at center throughout Summer League, and while he had his moments using his quickness to get around players off the ball, he also got shoved around often. Memphis' Jack Cooley really embarrassed him in the Grizzlies' win on Wednesday, for example. While Vesely needs to stay lean to take advantage of his strengths, he can't be shoved around that much. 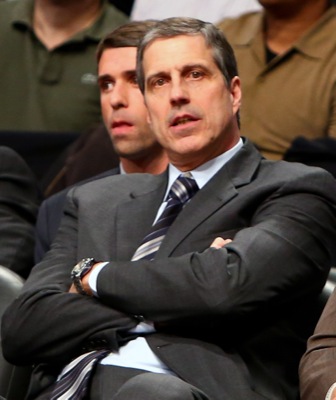 The Wizards' coach talks on NBATV.

"I mean, it's hard. The guys are much more stronger than me," Vesely admitted after that game. "But I'm just trying to handle it. In the season, we'll play this kind of defense. I'm getting experience with it right now, so it's good to get a chance to try all those things and get ready for the season."

Then, there's confidence, an age-old problem. Vesely seemed pretty free in Summer League, but that was just Summer League. His on-court demeanor in his best game against Denver, for example, was very different than his on-court demeanor in other games. After that game, Vesely said he felt really good from the moment he was warming up. He wasn't quite as confident after any of the other four games.

"He's got to believe in himself," Randy Wittman said on NBATV earlier this week. "Coming from overseas, he had never played this caliber of basketball before. I think he's gone through a couple of situations early on where he doesn't believe in himself. Let me tell you what: you can be the best basketball player, but if you don't have confidence, you aren't going to be worth a crap."

Summer League is not a time for sweeping generalizations, obviously. Vesely should dominate as a third-year player, and he didn't exactly dominate. But the feeling about him within the team appears to be a little bit more positive than it was a few months ago.

Was it enough, though? Time will tell.