Take a deep breath. It's only Summer League.

Otto Porter's rise to being the No. 3 pick in the 2013 NBA Draft has been expeditious to say the least. No more than three years ago he was tabbed by ESPN as the "best player no one's heard about." now, he faces lofty expectations as the top pick currently playing in this year's NBA Summer League.

His quick ascension into the spotlight cannot be commemorated without his incredible backstory. From the court overrun by dirt outside his grandmother's house in Missouri to his first ever airplane ride to the nation's Capital, Otto's personal temperament and on-court demeanor is demonstrated in his game by his upbringing and genealogy.

Otto Porter Sr, who overlooked the bulk of his son's playing days as an adolescent, knew that one day Otto Jr's game would speak for itself. He didn't need the hype-driven AAU system or a renowned high school to get the word out about his son. It wasn't long before Otto Jr.molded himself into a jack-of-all-trades player who happened to pull down 35 rebounds in his high school state championship game. Just a few months later, he'd travel to the east coast, where he'd devise a niche for himself at Georgetown in a rotation that featured several established upperclassmen. With players like Hollis Thompson, Jason Clark, and Henry Sims leading the way, Porter could sit back, get the most out of his opportunities, and allow Coach John Thompson III to bring him along slowly.

But in year two, none of the aforementioned upperclassmen from last year's rotation were on campus. Less than halfway through the season, fellow sophomore standout Greg Whittington was ruled academically ineligible by the university, thrusting the bulk of the offensive burden on Porter. He responded masterfully, which we all know, and the rest is history.

Imagine skipping his freshman season and having to deal with the circumstances he faced as a sophomore. Does he respond the same way and end up the third overall pick in the NBA Draft? Those are the very same cards he's been dealt at the summer league.

Allof the weaknesses that were portended in the months leading up to the draft are on full display and completely magnified in the style of play prevalent in Las Vegas. His second-rate athleticism, lack of upper-body strength and willingness to defer has never been more visible. He has a target on his back being the top pick in the summer league and an entire fanbase watching over his every move. 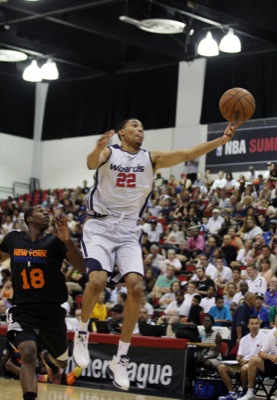 But more than anything else, the circumstances has gotten the better of him. Summer League is a guard's game, first and foremost, and if you're not scoring at a high clip or dazzling the crowd with thunderous dunks, chances are you won't get noticed by the casual fan. None of those pertain to Porter, who would much rather rack up hockey assists than blowing by three defenders.

But as I mentioned in my primer, it's the way you get your points, not the quantity. Nicolas Batum had Portland fans yearning for him to stay in Europe as he stood around watching the likes of Jerryd Bayless and Peteri Koppenen jack up shot after shot in the 2008 Summer League. He looked lost and years away from contributing to an NBA team, showing mere flashes of what he could do. He was able to free himself from his defender, be it off the dribble or off screens, but didn't have the scoring efficiency to back it up in Summer League, shooting just 34 percent from the field while averaging close to seven points and five rebounds per game.

But the coaching staff knowingly shrugged off the struggles. At 19 years old the last thing they cared for is statistical production. Batum is now a borderline All Star, while Kopponen has yet to suit up for an NBA team and Bayless has bounced around the league. Does that story remind you of anyone?

Many have pointed to Porter's position change as a justification for his underwhelming play, but as Sam Cassell has said, the difference between the shooting guard and small forward is menial at best. Both positions require coming off double baseline screens, curls to the top of the key, spotting up in the corner and some pick and roll action. Defensively is where this hurts Porter the most, as his average lateral quickness was exploited time and time again against Kent Bazemore on Saturday. He got beat on a double move in transition on more than one occasion, and struggled to fight over screens which led to some timely Golden State three pointers.

Porter has undoubtedly left a lot to be desired in terms of finishing at the rim and his on-ball defense. He's taken it upon himself to fulfill our craving for Jamison-esque circus shots and runners rather than going up strong with the ball, but he also hasn't been the beneficiary of consistent point guard play and competent team-oriented basketball that he'll inevitably corral in training camp and beyond. While Marquez Haynes has fared well controlling the pace of the game and should continue as a starter on Tuesday, Porter still doesn't get the swing pass he desires as a spot up shooter or the pass to the weakside corner when he's running off a screen. Washington has instituted more dribble hand-offs which Porter became increasingly fond of in his time at Georgetown, but the bigs aren't setting a strong base for picks, resulting in his defender shooting the gap and cutting off Porter's lane to the basket.

He not without his faults, of course. You can't excuse the entire two performances on player personnel or systemic issues. He looks to be going half-speed at times, he shies away from fighting down low for rebounds despite coming to the ball off misses and has developed a penchant for settling for fadeaway jumpers when presented with a switch rather than taking his man off the dribble. But there are some promising signs. Emeka Okafor and Nene should remedy a lot of his concerns coming off screens and having John Wall and Eric Maynor as his main set-up guys certainly eases concerns about him getting cleaner looks. Despite these struggles, he has just two turnovers to his name and has consistently made the right reads out of the pick and roll.

This is not a time for overreactions, nor is it fair for the once pro-Porter members to jump ship after two less-than-stellar performances. Remember, this is the same league that saw Anthony Randolph average an ungodly 27 points per game on 60 percent shooting in 2009, Marvin Williams take home MVP honors after averaging 22 points in 2006 and Greg Ostertag punking Tim Duncan. LeBron James shot 2-14 in his final summer league contest, and was also the victim of this:

The beat goes on. In 2008, Derrick Rose struggled mightily before sitting out the final three games, while Michael Beasley simultaneously dominated said league by dropping 20 points and eight rebounds, including winning a head-to-head matchup against Rose by scoring 28 points and pulling down nine boards. Hell, Mario Chalmers gave Rose all kinds of fits as they faced off the following game.

There will be a time where you can assess the front office on the 2013 draft class, but not two Summer League games into their NBA career.