The Washington Wizards are set for the Las Vegas Summer League. Here's a look at the key members of their roster and what they need to accomplish in the coming weeks.

If you have been tuning into the Summer League games currently out in Orlando or have been simply reading the box scores or just outright ignoring the whole thing because you're tired of hearing Kelly Olynyk's name pop up every five econds (I don't blame you), then there's one thing you should have managed to grasp through all this: Winning means nothing. Even in the freshly modified Las Vegas summer league where a tournament has been implemented for the 22 participating teams, the crux of this event remains unchanged.

This is not to say success in the summer is a bad thing, but when the league's lineage of MVP's is made up of Nate Robinson, Randy Foye, Josh Selby, Sean May among many others, it should leave a rather bitter taste in your mouth. There is no better time to experiment than in the summer league. Some players are given the green light while others are forced into foreign roles just to test their limits. The later is what engrossed much of the Wizards key players last season, and it's to be expected out of this year's group as well.

The Bradley Beal we saw out in Vegas last year was largely the one we came to love during the regular season. He was steady and poised, never did too much or got out of control and wasn't fazed by his supplementary duties as a pick and roll ball handler. Those pesky concerns over his shooting ability may not have been mitigated by his play (went just 6-20 from three-point range), but he at least looked the part, and performed well in other areas while serving as the team's primary scoring option.

No one was burdened with more turnover than Chris Singleton, who underwent a position change from small forward to stretch 4. The coaching staff seemed adamant about letting him explore each and every avenue afforded to him. He dribbled the ball the length of the court on several occasions, attempted multiple threes a game and fought down low for rebounds more frequently. It clearly wasn't in his nature to do all this as evidenced by his shaky dribble, awkward drives to the basket, and hike in turnovers and fouls, but no one was complaining. 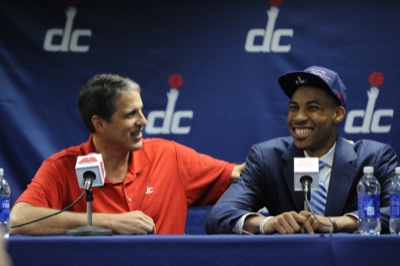 Get to know the Wizards' Summer League team.

Jan Vesely sported a reconstructed jumper and looked to be much more assertive shooting the ball. The results may not have been pretty, but it was exactly what the coaching staff was looking for. He eclipsed double digits in field goal attempts in one game, something he has done just twice in his career. He had trouble dealing with his bulked up frame and saw his explosion off the bounce suffer, and still maintained his label as a fouling machine (he had 10 fouls in one game), but he at least showed some promise. Of course, this went away during the season.

As a new summer league looms, we'll take a lesson from years' past and apply it to this year's squad. You'll notice some similarities, probably more of the same from the returning players, but it's important to keep a level-head even through their most outlandish performances.

This will be a nice jumping off point for Otto. He has a great chance to show what he can do as a facilitator of an offense given the dearth at the point guard position this year. With Sundiata Gaines, Kevin Dillard and Marquez Haynes in the fold taking over ball handling duties, Porter will have ample opportunity to show what he can do bringing the ball down the floor or working as a set-up man from the high post, as he was lauded for throughout the college basketball season.

But four days of mini-camp before Las Vegas isn't enough for him to grasp the fast-paced nature of NBA offenses, and it will reflect in his game as he takes the court on Saturday. Unlike last year with Beal, Wittman should be able to run more structured sets early on to get Porter easy looks at the basket, a luxury that wasn't afforded to the young shooting guard till later in the regular season. Rather than running Porter off classic pindowns or staggered screens, Wittman should be able to get Porter the ball on the move through HORNS sets when he's able to make quick decisions with the ball. The key is for him to discover his comfort zone now that he's away from Georgetown, and doing so in-games regardless of competition is always a plus.

I know many want to see the lengthy wing at the power forward spot in spurts, but I think the coaching staff will hold off on it initially. The last thing you want to do is swamp your new draft pick heedlessly, unlike Beal, who was essentially left with no choice with Wall and Nene both sidelined. Let Porter get comfortable at the 3 before diversifying his game.

Now here's a player who can really make a name for himself in the summer league. He's a scorer first and foremost, and he'll be hard-pressed to find an easier means of getting the ball in the hoop than this. Defenses are generally non-existent at this level, and the majority of the competition is either too flat footed to keep up or possesses a bereft understanding of positioning and rotations. Hitting open shots means very little in the grand scheme of things (missing them on the other hand ...), but if Rice Jr is able to consistently hit off the dribble or over outstretched hands in transition, it bodes well for his playing time four months from now.

This could be his last hurrah as a Wizard, so unless he shows massive improvement, he could be on his way out the door. Insinuating that a player's career hangs in the balance during the Summer League is inane, but suggesting that his time with this franchise is nearing its end is perfectly acceptable given the circumstances. This franchise will not let an entire offseason pass them by without catering to John Wall's demands of landing a stretch four, whether it is internally or through a trade. That giant gaping hole in the roster, otherwise reserved for a stretch 4 to be determined later, could be Singleton's should he start hitting from the perimeter with consistency.

But at the same time, it can't be at the expense of his man-to-man defense, which left a lot to be desired last year in Vegas. Those aimless drives to the basket or full court dashes to the rim will not be looked at with blind hope this time around, so scoring at an efficient clip with be the end-all and be-all for the third year pro.

After lashing out to the Czech media circuit about his failures as a Wizard and the mishaps of the front office in developing his talent, Vesely will have more than enough eye balls on him the next week. He got a pass last year, but that won't fly anymore. He simply has to show improvement on both ends of the floor, and if it's more of the same against this level of talent -- being unable to finish over slower, less-athletic bigs -- then more change could be on the way.

He's worked out with his Slovenian coach out in Los Angeles all summer, should be seemingly cleared from a health standpoint, and has had years of acclimating himself to the rigors of defending the paint in the NBA on a nightly basis. Slashing his foul totals in half, hitting at an acceptable clip from the perimeter, and staying alert on defense would go a long way for the Wizards top draft pick in 2011.

So sit back and enjoy some ugly, slow, foul-ridden basketball! It's Summer League y'all.