It's easy to say that Martell Webster is expendable after the Wizards drafted Otto Porter, but we explain why that's not the case and why the Wizards need to keep him.

After the Washington Wizards took Otto Porter and Glen Rice Jr. in the 2013 NBA Draft, it appeared that the writing was on the wall for Martell Webster. With youth on one side and a medium-sized name in Trevor Ariza on the other, one could extrapolate that the veteran wing is being squeezed out of Washington.

If so -- and it's worth noting that's not what Ernie Grunfeld has said publicly -- that would be a bad thing, for both parties. Webster showed his value last season in Washington in all facets.

Offensively, Webster and Washington are such a good match that it's hard to believe that there's a chance of him leaving. Webster came into the league as a highly-touted preps-to-pros guy who never quite made it as a primary scorer. There are two reasons for this: he's not a great ball handler and he's not an explosive athlete.

What he can do, though, is make spot-up jumper after spot-up jumper. Webster shot 42 percent from downtown last season while taking more than four three-pointers a game. For his career, he's at 38 percent from deep and that percentage should only go up as he becomes more and more polished. On top of that, MySynergySports.com ranked him the 22nd-most efficient overall scorer in the NBA last year, with a third of his offense coming on spot-up jumpers. That's a valuable skill period, but when you consider that this master of the three ball could play entire seasons next to ball movers like Porter, John Wall, Bradley Beal and Nene, it becomes downright scary how effective he could be.

Defensively, Webster's better than people realize. He does the little things to prevent no-names from having career nights against Washington. While he's not the stopper Ariza is or Porter should eventually be, Webster is almost as valuable a defender in his own way. While he slipped to No. 77 in the NBA last year, in 2012 Webster was the 22nd best player in the NBA at defending players coming off screens as per MySynergySports.com, an area where rookies like Porter and ball-hawks like Ariza tend to struggle. While Webster was only slightly above average defending against isolations, he does a good job of sticking with his man. Opposing small forward posted a PER of only 11.9 against him, according to 82Games, which is a testament to his ability to avoid giving up free throws, open three-pointers and easy shots off putbacks.

It's also worth noting that just because Ariza is going to be in Washington next year doesn't mean that he'll be here forever. Ariza is an expiring contract and trade asset, and with a skillset that overlaps almost entirely with Porter's, the UCLA product will either be forced to accept a reduced role sooner rather than later or make his way out of town. Washington didn't draft Porter to be a backup, and he could even be starting by the middle of the season. Ariza's stellar defense is valuable, but if Porter can perform the same role for less money, it becomes more of a luxury than a necessity.

OK, Webster's valuable. But should Washington really pay a guy four or five million dollars a year even if he's coming off the bench behind (what will presumably be) strong starters? Yes. Yes they should. 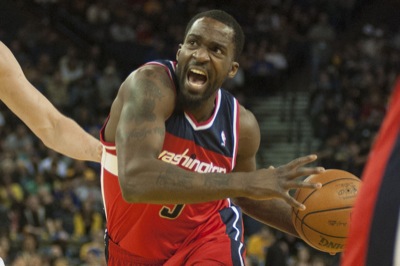 At best, Beal and Porter should each play around 33 minutes a game, leaving plenty of time for Webster behind both. If all he's doing is spotting up or running to the rim, the 6'6 Webster can be a very effective offensive player at the two, three or four. While his poor ball handling ability would have doomed him if he tried to play shooting guard on a team without multiple shot creators, it's a non-factor when some combination of Wall, Beal, Porter and Nene are drawing all of an opposing team's defensive attention.

Furthermore, Webster has the size and basketball IQ to play competent defense at either wing position, something that's especially valuable against less-skilled second units that struggle to find the kind of mismatches that can break down a defense. A wing rotation of Beal and Porter with Webster off the bench and a fourth guy (Glen Rice Jr.? Chris Singleton?) to step in if someone gets hurt would be awfully effective for the long term and should only get better with time.

Webster has a few intangibles that make retaining him even more of a no-brainer. Sure, he's coming off of a career year, but he's thrived in the past when healthy when asked to play a similar role. Plus, at 26, he's going to be as good as he'll ever be over the next few years, so this is as good a time to have him as any. He's also an excellent locker-room presence who meshes well with the mature, professional team identity that Washington has so carefully put together over the last few years.

Of course, there would be a drawback to keeping Webster around, namely that it could hurt the team from a salary cap perspective. Nene and Emeka Okafor aren't getting any younger and, with Wall likely to sign a max deal soon, Washington could come to a point where the team desperately needs another big man and has no way of acquiring one without giving up a core piece. That said, if Wall gets around $15 million a year and Okafor, theoretically, re-signs after next year for about $7 million, Washington should be about where it is now in terms of the team's overall salary cap hit. If Webster was signed to a three-year deal, something that sounds totally reasonable, he'd come off the books at the same time as Nene and right when an extension for Bradley Beal would kick in. Things would be tight until the end of the 2016 season, but they should be manageable, especially if Kevin Seraphin is retained for a reasonable amount and Porter becomes capable of playing spot minutes as a smallball power forward. Then, once Webster and Nene are off the books, the team could go all in for a free agent center if there's a need by then.

There are a couple of enticing options available in free agency this summer. A backup point guard who can start from time-to-time would be nice. Ditto for a power forward with range that extends beyond the paint.

For my money, though, I'd rather have a shooter who fits the team and the organization like a glove with the bulk of the mid-level exception.