After starring at Bucknell, big man Mike Muscala could be an interesting fit for Washington in the post.

Share All sharing options for: NBA Draft 2013: Mike Muscala could fit with Wizards

WASHINGTON -- As the Washington Wizards' apparent need for a Stretch 4 comes to a head, more traditional big men tend to be pushed wayside when options for this month's draft are discussed. If the Wizards add a big man, he better improve their spacing seems to be the reasoning here.

Decision-making in the NBA typically doesn't fall along those rigid lines, though. When it comes to the draft, roster needs only come into consideration as one of a multitude of factors whose importance fluctuates based on the proximity of title contention. The further away championships are, the less important needs become.

For a team like the Wizards that's making steady progress, but still has miles to go before catching up with the league's elite, it's all about finding the right fits. Coming off a steady workout performance Friday at the Verizon Center, Bucknell star Mike Muscala may qualify as that kind of guy for Washington. 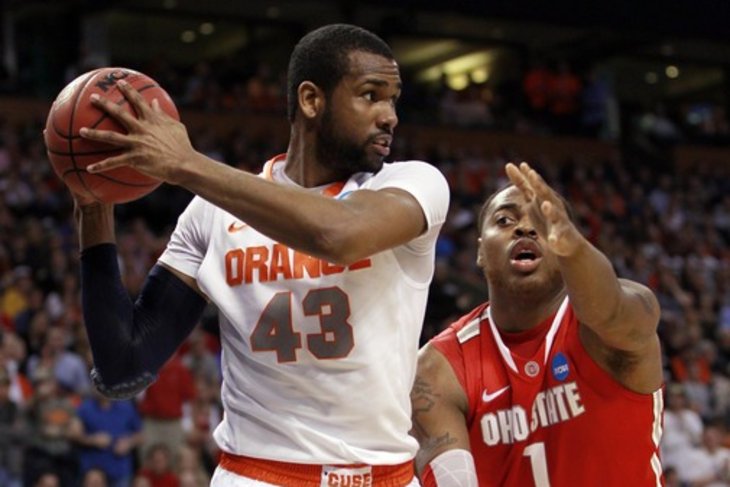 However, Muscala brings some legitimate NBA characteristics to the table, including size, rebounding and a good head on his shoulders. While he may not be precisely what Washington craves -- someone who can help space the floor without giving up too much on the boards or defense -- he's not that far off.

Asked how he might contribute to the Wizards as a rookie, Muscala responded like a prospect who's aware of what Washington's missing:

"Someone who can definitely space the floor, shoot the ball well, who can play inside and out," he said. "I'm going to be a good rebounder, good work ethic and someone who is going to be a great teammate."

At Bucknell, Muscala averaged 18.7 points and 11.1 rebounds per game during his senior season. Flashing an improved post game, he depended less on mid-range jumpers -- the improvement allowed him to better his efficiency as a senior even while taking on a larger role.

While the Wizards need guys who can play away from the basket to better pressure defenses, Muscala could be ideal as someone capable of providing scoring punch in a number of ways. If he can prove capable of consistently knocking down 15-footers, his rebounding and post skills could make him an excellent big off the bench.

Defense remains a question mark for Muscala, but he doesn't think he's far from making an impact on that end.

I'm a really good team defender because I talk well, I think that's one of the things my coaches have really stressed."-Mike Muscala.

"For me, I'm a really good team defender because I talk well, I think that's one of the things my coaches have really stressed, so I think that's something I could bring right away," he said.

He did admit he, "needs to get stronger to be better defensively," against the NBA's best athletes, but that's obvious just from watching him play.

Whether Muscala will even be available when the Wizards first second-round selection -- No. 38 overall -- comes up is questionable, as he noted teams have shown increased interest in him leading up to the draft. Still, heading to Washington would likely be a thrill for the 22-year-old.

Having played in this city a number of times against American University (my school, go Eagles! *sigh*), he showed some genuine affection for the nation's capital:

"I actually love the area. I got a chance to walk around yesterday, went to the Natural History Museum, saw the White House -- it was my first time. We were going to go to a Nationals game, but it rained. My girlfriend is from the area, so she showed me around and it was a great time. I love the area," he said.

Bad weather withstanding, it's not hard to see why Muscala and D.C. might end up being a nice fit. We'll just have to wait and see if the Wizards brass agrees.

Other notes and quotes after the jump: