The Louisville product finally became a rotation player with the Lakers last season, but was that a fluke or the start of something bigger? He has a lot of talent, but could he put it together?

The Washington Wizards' salary-cap situation is murky, which means they probably won't make any big splashes in free agency. That said, there are some needs on this team that can be filled, so Ernie Grunfeld must look for bargains that can fit into the few exceptions the Wizards have to use. We'll explore all free agents that could take the mid-level exception or less in this ongoing series. Next up: Earl Clark.

This past year: A throw-in to the massive Dwight Howard trade, Clark took advantage of the Lakers' lack of depth to become a rotation player early in the season. Amazingly, he earned a starting spot over Pau Gasol because of his three-point shooting, which was excellent at the time. Mike D'Antoni clearly prefers stretch 4s, and Clark was playing just like one at the time.

Problem is, his production nosedived as the season wore on. Clark shot 54 percent on threes in January, but just 21, 28 and 36 percent in the next three months. He saw his minutes sliced to just 20 a game in the playoffs, and he didn't hit a single three-pointer in the four games. Take away his brilliant January, and Clark averaged just 6.2 points and 4.6 rebounds a game while shooting just 41.5 percent from the field and 28 percent from three-point range. 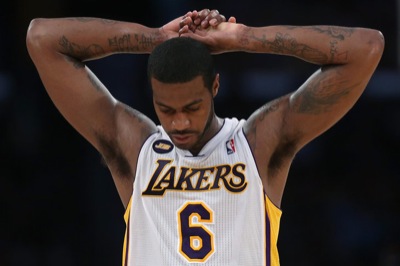 Why he's fit in well: Despite his late-season shooting slump, Clark is still young and has shown flashes of being a heck of a Stretch 4 option. He is capable of being a much more useful defender than, say, Chris Copeland, though he's still prone to mental lapses. If he can shoot somewhat reasonably from distance, he could be the rare Stretch 4 that makes an impact in other ways.

Why he might not: If that January stat line was indeed a fluke, he's essentially a Stretch 4 that can't shoot. The Wizards already have three of those on the roster.

Likely price tag: The Lakers would like to bring Clark back, but for how much is the question, especially given their massive payroll right now. My thought is that anything above half the mid-level exception is a significant overpay.

Verdict: Clark may look the part, but I really don't want to sign him. I think his January production was a fluke and he's prone to being overpayed because he played in a big market. I don't see very much that separates Clark from Chris Singleton.