Why am I a bigger fan of Otto Porter than Anthony Bennett? The NBA Finals explains a lot.

Every year, we do a post after the last Finals game where we try to find lessons from the two teams that made it to the mountain top and apply them to our Washington Wizards. A fair warning: this year's effort may weave in and out of clarity, since I'm working on only a couple hours sleep.

Still: the more I thought about the teams that made it far in this year's NBA Playoffs, the more I realized that what I saw is tied into how I feel about the big decision the Wizards will potentially make with the No. 3 overall pick in the 2013 NBA Draft.

I may not be as dogmatic or certain as some others on here, but I think it's pretty clear that I'm on Team Otto Porter rather than Team Anthony Bennett. I've gotten draft stuff wrong (Kawhi Leonard, for example), and it's really hard to project these players, so feel free to treat all this with whatever amount of disdain you want. But I think it's worth tying together why the playoffs explain my Porter preference. 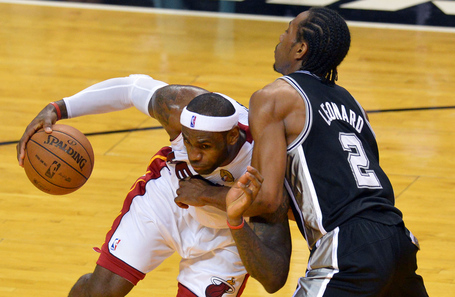 The NBA is a much different league, stylistically, than it was 15 years, 10 years, five years, even three years ago. Back then, this was a league of specialization. Scorers scored, defenders defended, passers passed and there wasn't a ton of overlap between the roles. Position designations were rigid and "tweenter" was a death sentence. The concept of a "two-way" star was much less essential than it is today.

Now? The league has evolved. Positions are fluid. Defenders don't just guard their man OR double team; they guard their man, zone, sort of double team, double team and play positions on the floor as a means to prevent someone else's man from driving. Offensive players don't just stand still: they cut, space the floor deliberately and squeeze through smaller holes than the greats of yesteryear did.

Watching so much basketball this year, it seems that the next frontier of the NBA will be misdirection. That's either in the form of offenses running decoy plays during their main play or the defense showing a coverage, then switching to something different. It's yet another example of what I dubbed the "footbalization of basketball" a year ago. The league is much more about reads, counter-reads and disguise than ever before. 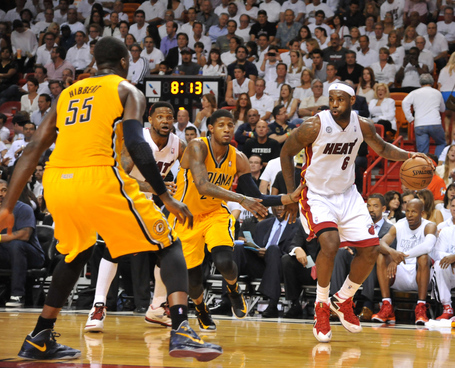 In this new NBA, what skills are needed to succeed? Watching the playoffs, here's my list:

Shooting: To keep the defense honest so it doesn't pack the paint. There is no greater evidence of this than the reality that the Heat were a better team in the Finals with LeBron James and Dwyane Wade playing separately rather than together.

Court vision: All offensive players need to be able to see the entire floor and make the correct reads, from smalls to bigs alike. Who on the Spurs was incapable of making pinpoint passes when the Heat trapped? Who on the Heat wasincapable of finding teammates? (The answer to the latter question: Chris Andersen and Udonis Haslem, two part-time players). Playmaking has become egalitarian, especially as defensive coverages get more complex. The era of the black hole is over.

Length: Space is now the NBA's most important commodity. Space creates openings, space create threats, space creates buckets. The ability to surrender space is the most important thing to building a modern NBA defense. What's the best way to surrender space? Length. The NBA's best defense -- the Indiana Pacers -- starts four players that are significantly longer than the average man at their position. That carried them to the brink of the NBA Finals despite an offense that often turned the ball over more than a distracted kid playing with an hourglass. Length literally "closes the airspace" for an offense, as a certain West Coast head coach that used to be an ESPN commentator used to say.

Positioning: The ability to slide your feet is still the most important aspect of defense, but the form that's taken has changed. Being able to stay in front of your man in isolation situations still matters, but with teams now creating quasi-zone schemes that defend elite players with five men rather than one, you're less likely to see someone truly caught on an island. That means that lateral quickness must be redefined in terms of how it helps a player maintain proper floor positioning, help on a pick and roll, etc. Preventative measures and on-court defensive intelligence matters more than ability. The Spurs have great perimeter defenders not because they are great at shutting down individual players, but rather because they are dogged at being in the right place off the ball at the right time. When the Heat's defense is flowing, it's because their traps are on point and that third defender is properly positioned to cut off the obvious first pass. Lateral quickness still matters, but it must be redefined.

Of those four qualities, three seem most difficult to pick up over time. Court vision and defensive positioning require a mindset cultivated from a young age and hardened over time to the point where it's instinct. It can be improved with dogged film study, but it still seems to me that any improvement in those qualities once a player reaches the NBA are marginal. Length, obviously, is all natural. Shooting is the exception -- that generally can be improved with hard work in the gym over time. 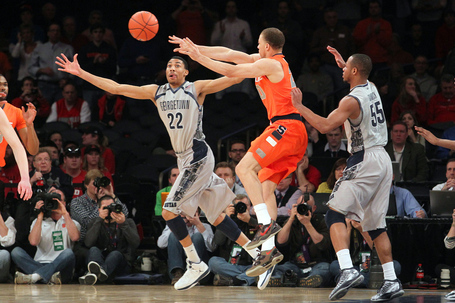 Bennett, on the other hand, lacks court vision and defensive IQ. He has OK length, but he's not "long" for his position like Porter is. He can shoot, obviously, but Porter had a better three-point percentage than him this year. What Bennett can do that Porter can't is score inside and rebound, but I'm not sure those raw skills are as important in the new NBA as Porter's are.

I could be wrong, obviously. There is a school of thought that you can teach the above four qualities, whereas you can't teach Bennett's scoring ability. But after watching the playoffs, the best teams have superstars and rosters that possess these four qualities in spades. Their best players aren't specialists; they can do many things. Of the final four teams in the playoffs, who possesses the throwback, one-dimensional, 20/10-style, ISO-heavy star? There's Zach Randolph and ... nobody else.

Maybe Bennett is Zach Randolph. But I'll take my chances on Porter's game in an NBA that is different than your father's or even older brother's NBA.