Nerlens Noel talks about rehab, being a top pick and his play

Nerlens Noel visited the Washington Wizards on Saturday, and he talked about his rehab, his play, being a top pick in the draft, and more!

Share All sharing options for: Nerlens Noel talks about rehab, being a top pick and his play

WASHINGTON-- The presumed No. one overall pick in the draft was in Washington on Saturday morning. Well, if he's going number one overall... why is he visiting the third team?

"It's a possibility. The Wizards have a great organization... Anything can happen."

With the Cleveland Cavaliers continuing to send mixed messages about who they'll draft at number one (Will it be Alex Len? What about Anthony Bennett?), Nerlens Noel knows that anything can, indeed, happen. The big boards are set and the mock drafts are being churned out, but that doesn't mean much in a draft in which those-in-the-know have universally decided there are a ton of great picks, but no franchise-saviors.

But Noel doesn't have time for worrying about all that. He'd love to be taken first overall -- I mean, who wouldn't? He's prioritized his rehab, and that's the first thing on his mind.

"It'd mean a lot to me [to be drafted first overall]. It's a dream come true to even be in the discussion, so to actually be picked No. 1, I'd be very blessed and fortunate and definitely would just have to get right to work to exceed the expectations," he said. 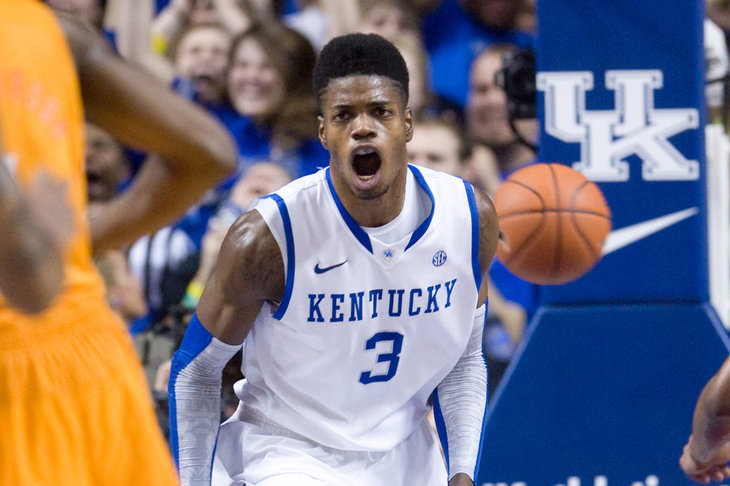 Is the Kentucky big man as good as he's hyped to be?

"Whatever happens, happens. I'm just fortunate enough to be here in this position, so I don't have to have a handle on it at this point. I'm just doing what I have to do to get back on the court through my rehabbing. I'm just really taking it day by day."

Noel didn't work out for the Wizards like some of the other picks have been doing (trainers did take a look at his knee and observe his rehab progress), so there wasn't a lot to garner from his visit. But he seemed very friendly, very smart and very eager to get back on the court and play in the NBA. He spoke to the media for a little over 10 minutes today, and here are a few things he had to say:

On his knee and recovery from his ACL injury:

"I'm feeling great. It's really coming along. Two a days are really paying off and I'm really starting to feel good. I'm starting to do some court work, defensive slides, some form shooting. ... I've been on the Alter-G. A lot of jogging. I've been jogging on the court. Good, hard defensive slides on the court. So I'm really coming along with that."

On when he expects to be on the court:

"Looking back to November, December. That's the target date."-Nerlens Noel on his return to the court

"Looking back to November, December. That's the target date, but I'm definitely gonna be careful and listen to my physical therapist and Dr. Wilkes and Dr. Andrews."

On his weight loss and gain after his injury:

"All year I was around 215. I just weighed myself. I've been doing that great with that. I weigh 218 now. I've been eating really well, on a good nutrition plan. I've gained 11-12 pounds. ... By the time the season starts and I'm playing again I want to be around 225-230. I think I could easily do that 4-5 months from now. Definitely takes good commitment, dedication, just eating right."

On what he knows about the Wizards:

"I played against Bradley Beal a couple times on the AAU circuit. Obviously I watched John Wall when he was at Kentucky. Emeka Okafor and Nene, so that's a good front court as well. They're an up tempo team. I like to get up and down and be real solid defensively."

On his personal and athletic development at Kentucky under John Calipari:

"Just definitely being more confident and just definitely working hard with Coach Cal and Coach Payne and the whole coaching staff. They really push you and it builds good confidence and swagger. I definitely think that's one of the things that came along in my game. I started to feel more comfortable on the offensive end. ... Coach Cal is not new with this, having NBA players. He really knows how to prepare you not just on the court but off the court. ... [He] is the ultimate teacher, preparing you for the NBA. I was definitely appreciative of having him and help prepare me for the next level."

On things people might not know about his game:

"I might say passing. Definitely like to set up for my teammates and just really getting them open and really finding them, especially like I did in college. Whenever a double team came, I mean someone cut to the basket, I always had my head on a swivel looking for them."

On keeping his iconic hairstyle:

"Growing up, I watched Fresh Prince of Bel Air every night before I went to bed, so I'm gonna keep it."-Nerlens Noel on his flat top

"Yeah definitely. I think it's a good thing. I like it. I got it with one of my best friends growing up. Goodluck, he's a great high school player as well. It's special to me. Growing up, I watched Fresh Prince of Bel Air every night before I went to bed, so I'm gonna keep it. ... I think this is kind of my identity, I feel."

On a Kentucky connection with John Wall:

"I met him one time way back on the AAU circuit, but I've never really met him through Kentucky. We definitely have some similar things, playing at Kentucky under coach Calipari, pretty much like family at Kentucky. I think we'd have good things in common."

"It's beautiful here. I've been here that one time [to visit Georgetown]. I came down with my mom and my little sister. We got good tour of the city and the campus. D.C. has a great basketball surrounding. They love their basketball here. It's definitely a great thing. The city's beautiful."

On hiring his agent later than expected:

"I hired Andy Miller. It took me a while because I was just really focued on rehab. There were a lot of requests to come out here and meet him and do this and that, but my main focus was just focusing on my rehab and doing whatever I had to do to get on the court. I mean, that's really why I didn't want to do too much, because rehab was my main focus. I finally came to a decision. I've had to work in times to really meet them without having to sidetrack away from rehab."

On NBA player or players he's modeled his game after:

"I'd have to say Kevin Garnett. I always looked up to him growing up. Especially the intensity and passion he played with. Definitely his work ethic and how much he would perfect his craft. He saw basketball as a business-first thing, and every day you'd see him come on the court and give his all."

On guys in the league that have reached out to him to give advice:

"Some of the Kentucky guys: Anthony [Davis] and Mike Kidd-Gilchrist. I spoke to Roy Hibbert, and they've given me good advice about how much you got to be prepared for the 82-game season. They told me I got to be ready for the rigorous challenge of the season."

On the Finals so far:

"I'm not rooting for anybody. I grew up a Celtics fan, so they went down. But I'm definitely paying attention. I'm learning, just watching these guys play. Duncan, Tony Parker: they're really playing well. It's a great series, 2-2. I didn't think it was going to be this even. I thought it was going to be lopsided. But it's a great series to watch."

A couple other fun tidbits:

1. He already listens to Wale and J. Cole. So, he's basically already a Wizard.