The Washington Wizards finally got a chance to sit down with Anthony Bennett, the top draft prospect from UNLV that's shy, afraid of heights and hoping to show that he's a "good guy" in lieu of being able to work out.

WASHINGTON -- Two interesting facts about Anthony Bennett that I did not know previously:

He's scared of heights: The UNLV star, who has been rehabbing from left shoulder surgery on Long Island, has made a conscious effort to skip the Empire State Building portion of the New York tour because of a bad experience he once had.

"I went there one time. I was scared, man," Bennett said. "When the elevator was going up, I was shaking."

Bennett also said that flying still makes him uneasy, even though one would think a plane was required to move him from his hometown of Brampton, Ontario to Las Vegas so he could attend the famed Findlay Prep as a high-school senior. (Not to mention all those trips UNLV took around the country). One reporter joked that this fear was odd considering Bennett's high-flying basketball ability.

"I don't really get that high, but once I do, I can get adjusted to it real quick," Bennett said, cracking a smile.

He's very soft-spoken: And he's not afraid to admit it.

"I'm really shy. All this is something I'm not used to yet," he said when I asked him if there's anything people don't know about him that he wishes they would.

And really, that was the most striking part of Bennett's 12-minute media session with reporters at the Verizon Center Thursday afternoon, one that was different than most I've attended. That, of course, is because of Bennett's torn rotator cuff, which required surgery in early May. Instead of seeing the final few minutes of a workout and hearing a tired player, we saw no basketball and a subdued Bennett, sporting a white, striped polo shirt. Bennett spoke softly during the session, sticking mostly to cliches about how his game will translate to the next level.

Otherwise, the interview was pretty uneventful. Some relevant quotes:
On what he can bring to D.C.: I'm versatile. I feel like I can play inside and out. It's a young team that gets up and down. I feel like that's what I like to do, so it fits the team." Later: "It's a young team, run and gun. They just like to get up and down the court. In a couple years to come, it could be one of the top teams in the East. That's what I feel like."
On criticism of his defense: "It's something that I can improve on. I go hard playing defense, but it just, I don't know how things end up. But I feel like if I work on my quickness, I'll be alright."

On his asthma: "It's not really a big deal. It's not like I'm the first one to have it, so it's just something I have to take care of. Eating right, using inhalers, just doing what the doctors say. It's something I do routinely, so it's nothing to worry about." 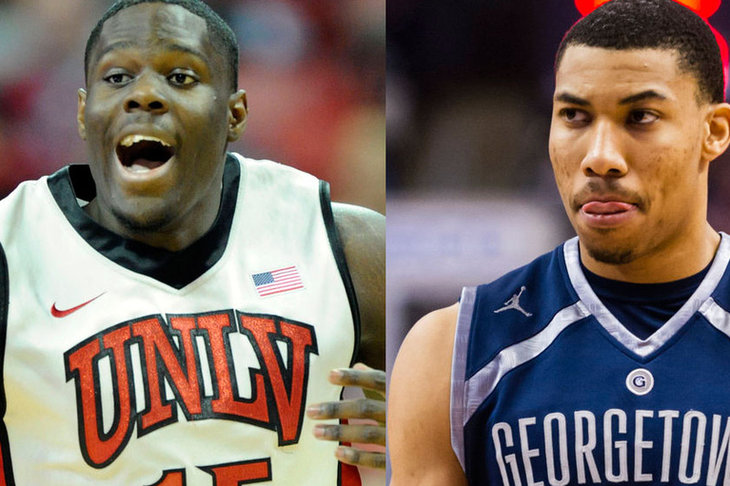 Thomas and Umair debate Otto Porter vs. Anthony Bennett at No. 3.

On what he's trying to show NBA teams, sans working out: "Just my personality. Show that I'm a good guy. If a team is going to invest a lot of money in me, I don't want to blow it right away. I just want to show them that I can save my money and I'm real smart with it."

On what UNLV taught him: "Even if things aren't going your way, just always got to play to the best of your abilities. You're not always a star player. You're not always getting the ball. You've got to do other things on the court to help your team out."

And by far the most amusing quote, on adjusting to the read-and-react style of the NBA: "It's just the game of basketball. It's not too complicated like math or anything like that."