Jan Vesely speaks out about the Wizards in recent interview

Jan Vesely aired some frustrations with his first two NBA years in an interview with a Czech magazine. Are his gripes legitimate?

Share All sharing options for: Jan Vesely speaks out about the Wizards in recent interview

Jan Vesely has been on the Czech media circuit recently, but his latest interview to the Czech basketball magazine "Basket" (here's the website, the story is not online) is what should grab most people's attention. Some of the money quotes, translated by the always-excellent Luke Mellow:

During Nov & Dec, Jan Vesely, frustrated as he continued to see his role shrinking, had thoughts of wanting to say goodbye to the NBA.

. . . weighing even more [than that]." He disagrees, saying he does not wanna play with a Nikola Pekovic-like body. #vesely

#Vesely: "[At one point of last season] my agent told me if I'd want to ask for a trade, we could try something."

. . . Kevin Martin & Shawn Marion. "It's not about the style [of shooting stroke], it's about the confidence." #vesely

It's going to be awfully tempting to bash Vesely for complaining about his situation, but I think he raises some important points. Namely:

Why are the Wizards asking him to bulk up so much so quickly?

Vesely entered the draft weighing 230 pounds. If Vesely is to be believed (and we've only heard his side of the story here), the Wizards want him to weigh even more than 253, perhaps even pushing 260 and beyond. Here is a list of NBA players that were listed at 260 pounds or more last season:

That's a list mostly composed of players who entered the league as centers, not wing players like Vesely. The best comparison to Vesely is Varejao, but he took time to build himself up to 260 pounds. Varejo weighed 240 pounds as a 28-year-old in 2008, according to the Cavaliers' website. Vesely will weigh 253 as a 23/24-year-old next year if he simply reaches his own minimum playing weight expectation.

Perhaps having Vesely bulk up this fast really isn't a good idea. The Wizards may want to convert him to center, but based on what we've seen so far, it probably would have been better to keep Vesely closer to his current weight initially and use his lateral quickness as an asset rather than turning him into something he's not.

Have the Wizards tinkered too much with Vesely's shot?

I can't speak to whether the Wizards have specifically asked Vesely to change his mechanics three times as he claims, but I know they have worked extensively on fixing his shot. I still remember Flip Saunders bringing in Jay Wolf, a shooting consultant from Wisconsin, for three days during Vesely's rookie training camp. I never was quite able to nail down what specifically Wolf tried to do, but I remember seeing him working with Vesely after practice. Vesely would often air-ball shots, which is by design when you are trying to construct a new shooting motion. You have to start at the bottom. 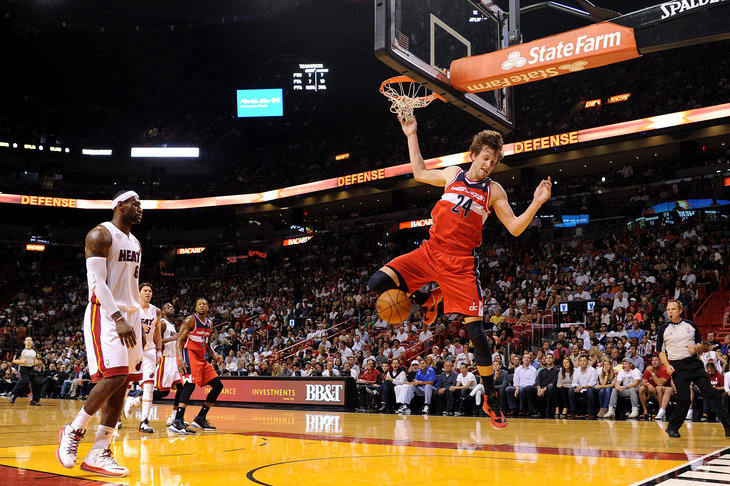 I also know this effort continued last summer. One thing I heard was that the Wizards were working with Vesely to get stronger in his lower body and improve his base, which would make his shot more fluid. They wanted him to be able to have enough strength to quickly bring the ball to his shooting pocket and then go up consistently.

The question is: are these tweaks, or something bigger?

A shooting coach always walks a fine line when trying to work with a player's shooting motion. Fix nothing, and the bad habits that dominated the player's motion previously will prevent him from reaching his shooting ceiling. But fix too much, especially at this stage, and suddenly, the player has no confidence, no frame of reference for success and can never achieve consistency. It's fair to wonder if the Wizards tried to rebuild too much in Vesely's motion instead of doing the best with the hand they were dealt.

I don't have a ton of sympathy for Vesely's other gripes. While I acknowledge that he's human, I also know that you can't get down on yourself in this league if you don't play. There's just no time to mope.

It almost seems like [the Wizards] drafted [Vesely] to become a player he's not.

However, if the full interview builds on the quotes Mellow tweeted as expected, there are a lot of reasons to question whether the Wizards have properly helped him become as good a player as he could be. It almost seems like they drafted him to become a player he's not.

While there's time for both sides to turn it around, it would also be foolish to completely dismiss Vesely's quotes.