NBA Draft 2013: Why the Wizards and Cavs should swap picks

Share All sharing options for: NBA Draft 2013: Why the Wizards and Cavs should swap picks

As a fan of two once-good-now-crappy teams (I'm from Cleveland and moved to D.C.), the NBA Draft Lottery is something that piques my attention more than I'd like to admit. Last night, however, I wasn't around to watch or hear about the lottery (family comes first, yo). Plus, everyone's been ragging on this draft as lackluster, and my teams weren't slated to pick awfully high anyway, so maybe it wasn't such a big deal that I wasn't around.

Then why did my phone explode with texts, tweets, and emails during the lottery? Oh, because the Cavaliers are picking first, and the Wizards are picking third. Cool.

Wow. Did that really just happen? Pretty crazy. Let me let that soak in a bit.

OK, that's all done. Now, let's get down to business.

As I mentioned before, the common "wisdom" has been that this is a weak draft. I think that's a cheap misnomer for the level of talent this year. Sure, there may not be any player that's going to turn your franchise's fortune around, but this draft is stocked with NBA-level talent in the form of good starters and rotation players. And maybe there will be some great talent that comes out of this draft. Who knows? Bodies and minds mature, and the players you draft aren't always the players they'll be forever.

At this point, most mock drafts have Nerlens Noel going first overall, with Otto Porter going third. Both of these players would make fine additions to the Cavaliers and Wizards, respectively. With Mike Brown coming back into the fold in Cleveland, a rotation of Noel, Tristan Thompson, Anderson Varejao, and Tyler Zeller will grow into one of the more formidable defensive frontcourts in the league. Porter is already comfortable in Washington, and a core of him, John Wall, and Bradley Beal moving forward is a combination that could make other teams green with envy and yellow with fear at the same time.

But neither of these scenarios, to me, serves as a best fit for these teams and these players. So I'm proposing the Cavs and Wizards should swap picks. Here's how I think that would go down. 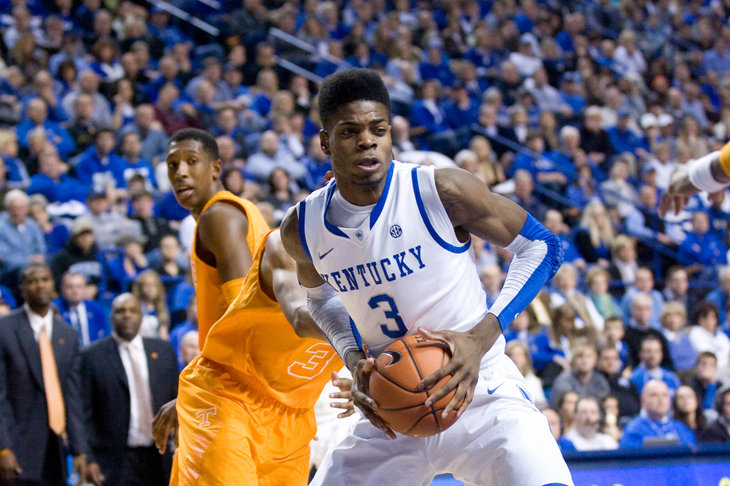 The Cavs should trade the first pick to Washington for the third pick plus any asset of Cleveland's choosing (outside John Wall, Bradley Beal, or a 2014 first-round pick). The Wizards would take Noel and the Cavaliers would end up with Porter, assuming the Magic pass on him.

This is the moment where most of you (and probably 100 percent of visiting Cavs fans) will close the browser tab and vow never to read anything I write ever again. I encourage you to hold on and wait for me to finish my argumentation.

The Cavaliers are lacking in three primary dimensions: overall defense, depth, and a serviceable small forward. Brown will provide the first, while Porter and the unnamed Wizards asset(s) would provide the latter two. Again, Porter is not expected to be a superstar in this league, but to scoff at his ability to contribute right away is ludicrous (straw man alert!).

The Wizards' biggest detriments this past season were injuries, a putrid offense, and inconsistent production from their backup bigs. Injuries are injuries are injuries. There are things that can probably help stave off injuries that the organization can do (maybe steal the Suns trainers?), but the draft won't change this. The offense will improve with a full season of Wall+Beal+shooters (and maybe some new plays, Randy Wittman). The inconsistent big-man production has to come from a consistent backup big man.

Through some magical combination of luck, lack of talent, lack of confidence, injuries, and dumb mistakes, the squad of Trevor Booker, Jan Vesely, Chris Singleton, Kevin Seraphin, Jason Collins and Earl Barron ... well, let's just say they couldn't cut it. The only consistent thing about them was their inconsistency. On any given night, Wittman would assume he had his rotation set. He would sub a guy in, then that guy would stink. He'd pick another guy, and they'd do better. He'd stick the latter guy higher in the rotation the next game, and he'd stink. He'd go onto the next rotation slot. He'd essentially buy high and sell low every game. Lather. Rinse. Repeat. It's as if the depth was more of a blessing than a curse. Part of the overall developmental problem for the bigs, though, was lack of playing time. The Wizards backup bigs spent many games in limited minutes or DNP-CD, but Cleveland has a much better track record of sending players down to their D-League affiliate in Canton. If guys are DNP-CD on the Cavs, they won't be idle on the Charge.

Noel, on the other hand, would make a dependable, serviceable and consistent backup big in Washington in the short term. His defensive skills would only grow playing alongside Emeka Okafor and Nene, and any offense he could provide would be gravy. Plus, getting rid of one or more of their existing backup bigs would help the Wizards establish a proper, hierarchical, talent-based rotation. No more "Randy's Crapshoot." If the Wizards are able to hold onto Martell Webster, he and Trevor Ariza would be difficult to move out of the way for Porter as an additional small forward.

Now, if the trade of Number 1 for Number 3 + Unnamed Asset(s) doesn't sound good to you (which it probably doesn't, Cleveland), maybe sweeten the pot around the edges. How about Number 1 + Wayne Ellington (additional shooter!) for Number 3 + Vesely or Singleton+ Garrett Temple or Cartier Martin? You could play around with more combinations here, but I think the core of this trade makes sense for both parties. And on top of any depth the Cavs might get in a Wizards asset(s), they'll be sure to get even more with their 19th overall pick that they got from the Lakers. Yay more depth for Cleveland!

And now comes the part where you all tell me I'm crazy. Have at it, folks.