Our NBA Draft profiles continue with a look at Shabazz Muhammad, the one-time phenom whose stock has fallen from that of a top-overall pick a few years ago to the point that some are questioning whether he could fall out of the top 10 altogether.

College career: It might be hard to remember or believe now, but a few years ago Shabazz Muhammad was basketball's next phenom, a player whose scoring ability drew comparison to Kobe Bryant and made him the runaway away favorite to be the top overall selection in the 2013 NBA Draft.

But as the attention Muhammad drew as a high school player increased, opinion of him seemed to mellow, to the point that by the end of his senior season he wasn't even the unanimous choice as the top prospect in his own class, let alone the game's next chosen one.

That said, Muhammad still finished his high school career as a five-star, top-2 recruit (with Nerlens Noel surpassing him as the No. 1 prospect on some recruiting websites) with an elite-level scoring mentality and as good a shot as any player of being the top choice in the 2013 draft.

After choosing to attend UCLA over Duke and Kentucky, Muhammad's college career got off to a rocky start, first when the NCAA declared him ineligible hours before his season opener after determining he had received improper benefits from his father's friend, who paid for Muhammad's plane tickets and hotel rooms on unofficial college visits.

Muhammad's family contended that the NCAA had been aware of the expenses, and even gone as far as to sanction them. UCLA appealed the suspension, and a Nov. 14 Los Angeles Times report suggested the NCAA might have predetermined Muhammad's fate. A couple days later, after missing three games, Muhammad was reinstated. A month later, the NCAA fired the lead investigator in Muhammad's case.

Once back on the court, Muhammad quickly showed why he was the nation's top perimeter recruit, scoring 15 points off the bench in his first game, a 78-70 loss to Georgetown. He was inserted into the starting lineup the next game, and scored a game-high 21 points in a 60-56 win over Georgia.

Muhammad scored in the mid-teens his next four games before pouring in four-straight efforts of 20-plus points, including a season-high 27 points in back-to-back victories against Fresno State and then-No. 7 Missouri, the latter of which included Muhammad hitting the game-winning three-pointer in a 97-95 overtime win. He also scored a game-high 23 points in an 84-73 road victory over then-No. 6 Arizona.

Though he ended his brief college career with three sub-.400 shooting performances, Muhammad was ultimately named first team All-Pac 12, though he had to share the conference's Freshman of the Year honors with Arizona State's Jahii Carson.

All in all, Muhammad's lone college season was underwhelming given the hype that once surrounded him. Yes, he was a very good scorer, but he didn't showcase many elite skills outside of his effort and scoring instincts.

His freshman year also didn't come without inconsistency (particularly a six-point, 3-for-13 stinker against Utah and 4-for-19 showing against Washington State) or controversy, as many took notice when Muhammad, after calling frantically for the ball in the closing seconds of UCLA's Feb. 7 contest against Washington, watched a teammate hit the game-winner and walked by rather than joining in with the rest of the Bruins in their celebratory dog pile.

Whether the incident spoke to Muhammad's attitude is open to interpretation, but it certainly didn't help quiet those who accused him of being a me-first, team-second player concerned only with racking up points en route to a lucrative NBA career.

It also didn't help matters when the LA Times revealed prior to UCLA's first round NCAA Tournament contest that Muhammad was actually a year older than previously believed, which helped explain why in high school he always seemed to be stronger and more physically-mature than his opponents while building his national profile and status as a top-recruit.

Perhaps more troubling than Muhammad's age was the report's account of his father, who came across as loving, but also overbearing and manipulative. Might some lottery teams be leery of selecting Muhammad and the potential headache that comes attached?

Offense: Whichever team selects Muhammad is getting a scorer, that much they can be certain of. Contrary to what was written about him early in his high school career, Muhammad is not an elite athlete, merely a very good one who simply knows how to put the ball in the basket in a variety of ways. 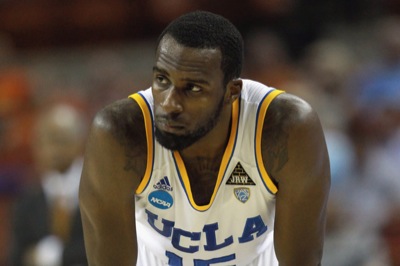 Tom Ziller on the uncanny similarities between Muhammad and the Golden State Warriors' small forward.

The team that takes Muhammad will also be getting an absolute gamer on the offensive end. His effort and competitiveness on this side of the ball are both sublime. He has a star's mentality, and wants the ball in his hands at the end of a tight game (see: Feb. 7 against Washington) regardless of whether he's been hot or cold.

At 6'6" and 225 pounds, Muhammad is strong and able to finish through contact at the rim. He displays excellent offensive instincts and timing when cutting to the basket, and doesn't shy away from contact down low, but he's not an explosive leaper and is prone to having his shot blocked amongst the trees. Muhammad does show very good open court speed, but he isn't the best finisher in transition, either.

Muhammad often relished the chance to post up smaller defenders in college and got to the free throw line at high rate. Unfortunately, he only shot 71 percent from the charity stripe, which doesn't instill confidence in the long-term development of his jump shot. Muhammad used his strength and size to score on outmatched opponents in high school, so he entered college with concerns surrounding his jumper. He put some of those to rest as a freshman, shooting 38 percent from three and displaying consistency on catch-and-shoot jumpers, but Muhammad seemed less comfortable shooting off the dribble and generally has what would be considered a passable, but not great jumper for a perimeter player.

A lefty, Muhammad has a pretty good first step and drives well to his left, as would be expected, but his handle can be sloppy when going to the right. College defenders often shaded Muhammad to his right, and it will only get worse in the NBA if he doesn't improve his right-hand handle. A little short than the ideal NBA small forward, it will likely be Muhammad's position nonetheless given his ball handling and jump shot.

The one gaping chasm in Muhammad's offensive game is his playmaking ability. He's the rare scorer who is not effective in isolation, and he's a bit of a black hole once he gets the ball in his hands. He had a usage percentage of nearly 30 percent but averaged only 0.8 assists per game, which is abysmal for a perimeter player. Opponents could feel free to double and triple Muhammad, because chances were he wasn't passing the ball. Here's a telling/chilling tidbit courtesy of DraftExpress: Michael Beasley, Morris Almond, Lazar Hayward and Al Thornton are the only non-big men selected in the first round in the past 10 years with a lower assist rate than Muhammad. Yikes. Muhammad's confidence can also work against him, as he'll too often settle for the type of low-percentage two-point shots that have driven us here at Bullets Forever crazy for so long.

Muhammad's effort, strength and length are all reflected in his totals on the offensive glass. With 3.5 offensive rebounds per 40 minutes, Muhammad was one of the better offensive-rebounding perimeter players in the country.

Defense: Perhaps a bigger reason why Muhammad will probably have to play small forward in the NBA is that he lacks the lateral agility and foot speed to defend NBA shooting guards. There's perhaps no bigger indicator of Muhammad's lack of elite-level athleticism than the 0.7 steals and 0.1 blocks he averaged per game. Top athletes find a way to make a bigger defensive impact than that.

Muhammad's mindset also undergoes a sudden shift on the defensive end, where his competitive, aggressive nature is replaced by passivity and generally apathetic play. He could often be spotted jogging, or even walking back on defense after missing a shot, and he doesn't work much at all on defense when his man doesn't have the ball. He tends to be a "watcher" on defense, keeping his eye on the ball handler, so he often loses sight of his man and was repeatedly victimized on backdoor cuts.

Even on the ball, Muhammad shows poor technique, standing upright in defensive stances that seem to scream, "Please drive on me!" Perhaps this is something that coaching could fix, but Muhammad just doesn't seem to be all that interested when playing defense. It's kind of infuriating to watch, actually.

Pro potential/Wizards fit: Muhammad projects as a very good scorer in the NBA, but right now there are too many glaring holes in his game, namely his playmaking and defense, to determine if he has what to takes to fulfill the projections of stardom that hung over him a few years ago. I think some casual fans who've heard for years about Muhammad's supposed elite-level athleticism could be shocked when they first see him on an NBA court and realize that he's actually not that great of an athlete for a lottery pick.

Muhammad's stock has fallen from that of a top-overall pick a few years ago and a top-3 pick prior to his college season to the point where now some are questioning whether he could fall out of the top 10, or even the lottery altogether. I'm not sure I'd go that far, but you do get the feeling when watching Muhammad that his stock is more based on the hype he accrued as a high schooler than his play as a collegiate, when he seemed to score more by sheer force of will than by skill or talent. Muhammad has the mentality to thrive in the NBA, but does he have the skillset? He won't be able to bull through defenders in the pros the way he did in high school and college.

As for the Wizards, it's looking more and more likely that Muhammad might be available when it comes time for Washington's selection. He fits a need in that the team could use another perimeter scoring threat. Plus, as a scorer who's best cutting to the basket and catching-and-shooting, Muhammad will need a good point guard to be effective at the next level, so he's a decent fit alongside John Wall.

But he's not the kind of deep-shooting threat that really thrived alongside Wall last season, and it's hard to see how Muhammad would fit into a team that last season prided itself on its defense. Randy Wittman has proven he isn't afraid to sit guys who don't hustle on defense, so if the Wizards select Muhammad, he would need to completely alter his mindset on that end of the floor in order to avoid being buried on the bench for much of his rookie season.