How much does Emeka Okafor mean to Washington's defense?

The more expensive half of Okariza has been at the center of Washington's defensive resurgence. Just how much does the team rely on him, though?

Share All sharing options for: How much does Emeka Okafor mean to Washington's defense?

Emeka Okafor's season has been a best-case scenario. Coming to Washington to an at-best luke-warm reaction from fans, Okafor has anchored an excellent defense, owned the glass and been a positive locker room influence. That adds up to a player that, despite an expensive contract, is now being treated like a potential key piece as opposed to an expiring deal.

Washington's defense has been good almost from day one this year. Meanwhile, the team's rebounding has been respectable despite the injuries Nene has played through and the maddening inability of Kevin Seraphin to play up to his potential on the glass. Okafor is second on the team in minutes played this year and it's a safe bet that he's had a lot more to do with the team's defense and rebounding than first-ranked Martell Webster.

Washington has been particularly good this year any time Okafor has been paired with a decent defensive player. The Wizards' defensive ratings of 95.9 when Okafor plays next to Nene is as good as the Pacer's league-leading defense. Even when Okafor plays next to Seraphin, the team's defense is, on a per-possession basis, as good as the third-ranked Spurs'. 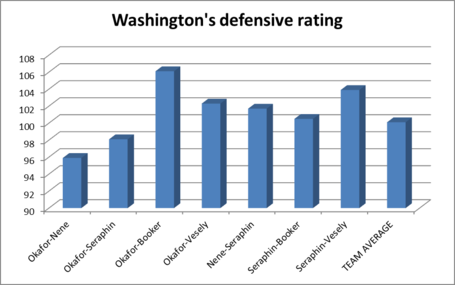 Data courtesy of NBA.com/stats, minimum of 100 minutes played together

Washington's defense crushes it when Okafor's on the court, largely thanks to his basketball IQ and positioning. Okafor doesn't block an abnormal number of shots for a center (1.4 per 36 minutes) or move well enough to play on the perimeter a la Josh Smith. He rebounds well, but so does David Lee, and he's not exactly a DPOY candidate. Even MySynergySports.com, which tends to offer a decent amount of insight into each players' individual strengths and weaknesses on defense, only ranks him 49th overall in the NBA as an individual defender.

Almost all of Okafor's defensive value comes from his ability to be in the right place at the right time, protecting the rim and disrupting opponents' drive and kick game.

That's not to say that Okafor should be deemed irreplaceable. While there aren't as many big men capable of anchoring an elite defense as general managers and coaches might like, the presence of the mobile Nene and Seraphin, both of whom can play effectively at the four or the five, gives Washington some flexibility should the organization decide to not make the 30 year old Okafor part of its long-term plans.

Essentially, Washington would need to replace Okafor with a big man who can rebound, block shots and, ideally, hit a 15-foot jump shot if the team doesn't want to disrupt its chemistry. There are a couple of guys available in the draft who fit that bill. Ditto for free agency. Even though Washington doesn't have much cap space, a sign and trade for a player like Paul Millsap or Timofey Mozgov wouldn't be out of the question.

The Wizards will cross that bridge when they get to it. For now, they have a good center who's two weeks away from being on an expiring contract, and there's quite a bit a smart general manager can do with that. Even if Washington stays the course, though, Okafor's going to make everyone on the team's life easier.